The Premier declined to detail the nature of the allegation he referred after Sport SA CEO Leah Cassidy wrote to him in recent days to complain about his minister’s handling of a recent meeting.

But correspondence from Cassidy to the Premier – that has been provided by InDaily by a third party and sent to Public Sector Commissioner Erma Ranieri for investigation – details “instances of bullying and intimidation that I have recently experienced at the hands of your Minister for Recreation, Sport and Racing, Hon. Corey Wingard”.

The meeting was called to air concerns – flagged in InDaily last month – about a new State Government funding model for sports grants that many stakeholders claim is “ripping the heart out of the sector”.

The new program divides $2.3 million between 19 projects, with applicants to “work with at least one other organisation to deliver their project”.

But state-run grassroots sporting organisations say the new grant model strips funding from their sector, diverting it instead towards big-money stakeholders, private providers and councils.

Wingard and a member of his staff met in June to discuss the matter with Cassidy and Sport SA president Michael Wright, a former sport minister in the Rann Labor Government.

Cassidy told InDaily today “we set a meeting with the minister [but] there wasn’t a result – the meeting was cut short”.

“We followed up with a letter to the minister, raising our concerns about the grants because we didn’t feel we’d been given a fair amount of time to air those concerns,” she said.

“Subsequent to that there was a further incident which I can’t outline, which prompted me to write to the Premier, with the support of Michael and the board.”

In the letter, which has been provided to InDaily by a third party, Cassidy tells Marshall that Wingard made “a deliberate reference to having looked into the finances of Triathlon SA, one of our members who had made a public statement about the partnership grants, stating; yes I can see how much Triathlon have spent on trophies, staffing and event costs”.

“This was clearly designed to intimidate and in fact Triathlon have indicated that they were very intimidated by the references made during the meeting,” she wrote.

She said a staff member also made her feel personally intimidated and “the Minister made no attempt to stop this behaviour during the meeting”.

“Following the meeting I wrote to the Minister outlining my concerns about his and his [staff’s] behaviour, informing him that I felt bullied and intimidated”.

“To date I have not even had an acknowledgement of receipt of the letter,” she wrote.

She also alleged she later “received a phone call from Kylie Taylor, the Chief Executive of the Office for Recreation Sport and Racing who indicated to me that ‘in the circumstances of my claim of bullying and intimidation against the Minister we believe it is in everyone’s best interest if you don’t attend [a subsequent] briefing with the Minister’.

“The Minister had called a virtual meeting of the sport and recreation industry… to be excluded from this meeting is nothing short of intimidating,” Cassidy wrote.

“Following the phone call I felt very shaken and in almost disbelief that as CEO of Sport SA I would be excluded from such an important meeting.”

Marshall today declined to discuss the alleged behaviour, telling reporters: “I’m not going to speculate on it in the media, but I did receive a complaint and so I forwarded it directly on to the Commissioner for Public Sector Employment.”

He said the Commissioner, Erma Ranieri, was “very experienced in these matters and so we’ll wait for her to come back with recommendations”.

“She’ll come back with some recommendations if she sees fit,” he said.

“I think we need to have the inquiry before we actually determine what action the Government will take, but we take any allegation to our Government seriously and so we’ve referred it on promptly.”

The Opposition has called for Wingard to stand down until the investigation is complete, with spokesman Tom Koutsantonis saying: “This allegation is very concerning, and any investigation must be treated incredibly seriously.”

“This is a Minister of the Crown who is clearly out of his depth on a wide range of issues, and now he is allegedly treating grassroots sports very poorly,” he said.

But Marshall insisted he “absolutely” backed Wingard in his role, and that he should not step down pending the inquiry.

“We have referred it on very, very promptly… if there is a reason to take any further action, I’ll have no hesitation to do so,” he said.

Marshall contrasted his approach with that of Opposition Leader Peter Malinauskas, amid ongoing questions about former frontbencher Jayne Stinson, who left the Labor frontbench just two weeks after a now-former trainee raised concerns with parliamentary authorities about the safety of her workplace environment.

“[Malinauskas] probably needs to front up and tell us what he’s doing about those allegations,” Marshall said.

“People can make these complaints – we deal with them in a professional way… unlike the Labor Party, we’re not sweeping them under the carpet.” 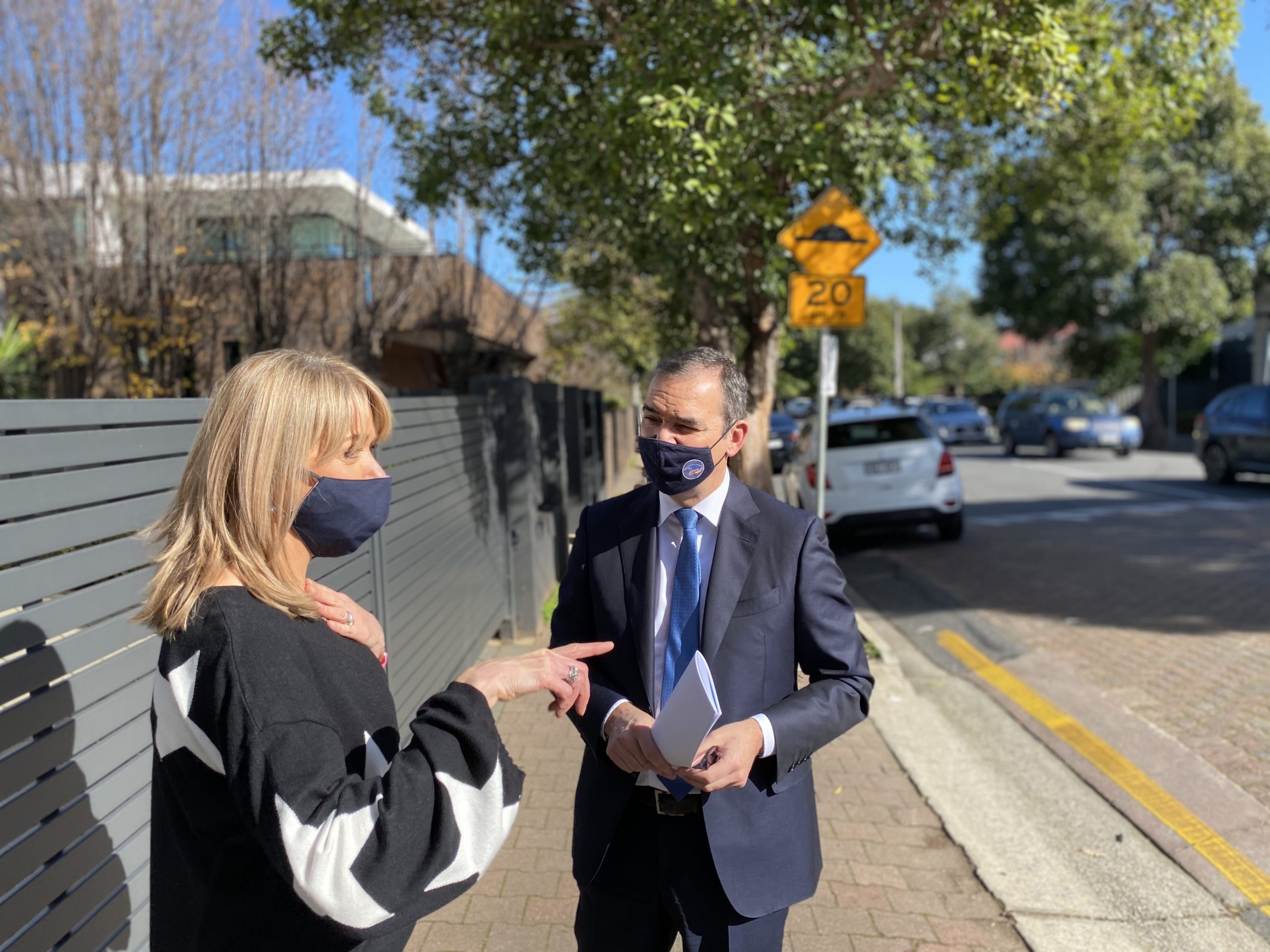 Steven Marshall before speaking to the media at Hyde Park this morning. Photo: Tom Richardson / InDaily

Cassidy said the Premier’s response to her complaint was “pretty immediate… I sent the letter [last] Friday and I had a response on the Monday”.

“He thanked me for the letter [and said] he had referred the matter for an independent investigation,” she said.

In a statement, Wingard said: “An unsubstantiated claim arising from a meeting on 24 June about the Partnerships Program with Sport SA CEO Leah Cassidy and former Labor MP and now President of Sport SA Michael Wright has been referred to the Public Sector Commissioner.”

“The new Partnerships Program enables some remarkable and innovative initiatives to come to life encouraging more people to get active,” he said.

“Around 90 per cent of Partnerships Program funding has been allocated to not-for-profit organisations that exist to service the community.

“The new Partnerships Program is project based funding to deliver against the government’s Game On initiatives and is not for funding ongoing operations.”

Sport SA sent members of parliament a letter in recent days outlining the sector’s opposition to the new grants model.

“The response from industry to the partnership grant announcement was immediate and profound,” says the letter, signed by Wright and Cassidy.

“We have never seen this level of anger, dismay and disbelief before.”

They said the changes would lead to club closures, sports stagnating, an inability to attract female participants, job losses, increased registration fees for participants and the scaling back of “proven successful programs”.

The letter noted the meeting with Wingard on June 24, saying “the above impacts were relayed to the Minister and a number of questions were posed”.

“The Minister’s response to concerns was that he stands by allocating the funding to the applications outside of the sector as these were the projects deemed to have best met the Game On agenda and criteria of the grants,” it said.

“He suggested that the industry would need to do more to work with [the Office of Recreation, Sport and Racing] to ensure future applications meet the criteria and therefore secure funding.

“He also made no guarantee that future funding from partnership grants would be directed to the sport and recreation sector and industry (as per the commitment in the grants review report).”

The letter said the partnership grants were now “funded for the next four years [and] with the Minister unable to provide a guarantee that funding will flow to the sector throughout this period, this represents a possible total loss to the sector of over $17 million”.

“Many of our beloved local sporting clubs will not survive this devastating cut,” they said.

But Marshall today stood by the new funding program saying: “I’m very happy with the way we’ve administered those grants.”

“I feel very strongly that there needed to be some changes to the way they were being administered, and I think we have a very open and transparent way of administering those grants,” he said.

“Not everybody will agree – this is the nature of when you hand out a grant, some people that don’t get their grant application fulfilled have a grievance [and] that’s fine… you’ve got to have a process.

“I think we have an open and transparent process here in SA and I back it 100 per cent.”