Documents uploaded to the State Planning Commission website reveal Walker Corporation made a request in January to push its November 2022 development deadline out by two years.

The Commission agreed to the request in February, meaning Walker Corp now has until November 2024 to “substantially complete” the 27-storey, 108-metre build.

The tower, to be located behind Parliament House at the redeveloped Festival Plaza, was first approved by the state’s planning body in 2016, after the former Labor Government in 2012 gave Walker Corporation exclusive rights to develop the iconic Adelaide precinct.

At the time, the company’s owner, billionaire property tycoon Lang Walker, announced the office tower would be complete in 2019.

Since then, the developer has changed the building’s design five times, with the latest iteration approved by the State Commission Assessment Panel (SCAP) in November.

As well as the 27-level office tower, the project also includes a three-level retail complex and a five-level, 1646-space underground car park, which opened to the public in May.

State Government agency Renewal SA is coordinating the redevelopment of the Festival Plaza.

In response to questions from InDaily, a Walker Corporation spokesperson said because the project was an “integrated development, with various stages laid out by the State”, the development duration “is longer than the 2-year period originally granted”.

“Subject to State approvals a significant portion of the public realm will be delivered early 2022 with the office building finishing on time in the third quarter of 2023,” the spokesperson said. 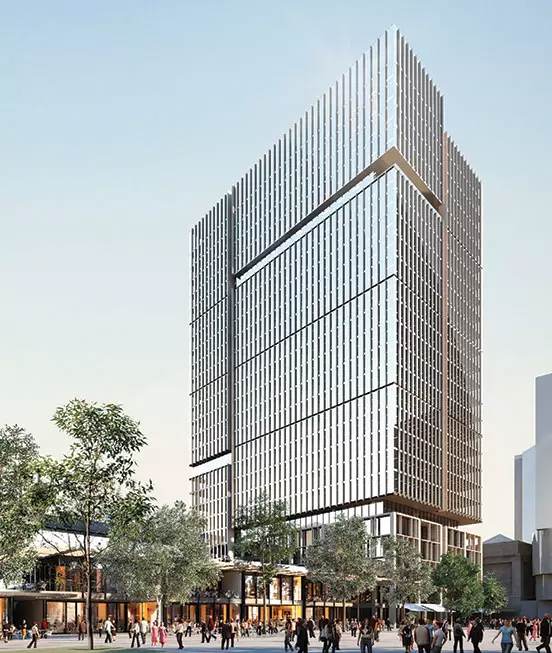 Meanwhile, Walker Corp has fuelled speculation that a university has signed on as the tower’s key anchor tenant, after applying to change part of the tower’s specified use from an “office” to an “educational establishment”.

It has also applied to make “minor changes” to the tower’s design.

Asked what changes it wanted to make to the tower, a Walker spokesperson said: “In keeping with any approval in place, we incorporate design changes to meet tenant requirements”.

“Changes to parts of the building class type under the National Construction Code is always necessary where the classification needs to meet the use,” they said.

“There are many buildings in the Adelaide CBD that have dual classification.”

In a letter to the SCAP, Adelaide City Council Acting CEO Clare Mockler said the council had no comment to make about the proposed design changes.

Walker Corporation has committed $450 million to redevelop the Festival Plaza, on top of a $213 State Government contribution to upgrade the Adelaide Festival Centre and public realm.

In May, Walker Corp’s CEO David Gallant said the tower was “just weeks away” from construction.

“It will be the number one place to do business in Adelaide, where you can also enjoy the best retail and food precinct,” he said.