The declaration came as international arrivals into SA will be halted on Monday and Tuesday, after Marshall wrote to Prime Minister Scott Morrison asking for a temporary pause with around 4000 contacts connected to the Modbury cluster currently in directed hotel quarantine.

The new case, which brings the Modbury cluster total to 16, is linked to the “super-spreading” event at the Tenafeate Creek Winery, with Marshall celebrating SA’s “continued good news” as surging testing queues – a political headache for the Government as people reported lining up for up to 14 hours – were finally brought under control.

“Those waiting times have massively come down, with no more than a one hour wait at any of the testing sites around SA,” Marshall said.

Despite that, authorities turned around 23,410 results yesterday – down slightly from the day before – which the Premier declared “a very, very good day”.

“It’s just shy of Thursday but an extraordinarily good result,” he said.

“South Australians have endured some very long wait times – I reiterate my apology to the people of SA but also my thanks to people for getting out and lining up,” he said.

The new case is a man in his 60s, who has been staying at the Tom’s Court dedicated COVID-positive facility with his wife, who had previously tested positive as part of the winery cluster, which now stands at nine cases.

Chief public health officer Professor Nicola Spurrier said the pair were staying together as “we always need to look at the health and wellbeing of all individuals”.

Asked about concerns from family members reportedly expressing concern that the man was transferred when he was not COVID-positive, Spurrier said: “Generally we like to have people separated but we always ask people whether they would like to be with somebody.”

“We don’t go into the details of conversations we have with our patients,” she said.

Spurrier said the Tenafeate Creek site and The Greek restaurant in the city were the key sites of concern linked to the current outbreak and “we do expect to have some more positives coming through”.

“But if those people have been in quarantine for the entire period of time they will not have any exposure sites,” she said.

The current list of exposure locations is detailed below and is regularly updated.

A woman in her 80s was transferred to the Royal Adelaide Hospital last night, joining an earlier case to be transferred to ICU, but Spurrier said both people were stable.

“They’re requiring a small amount of oxygen but staff are very happy with their clinical status,” Spurrier said.

Another case in their 20s was also taken to hospital for a “clinical review” but was “fortunately deemed stable and gone back to Tom’s Court”.

In a public notice, SA Health said the Victoria Park drive-through testing site would close temporarily due to weather.

It comes as the Adelaide City Council today announced it had set up a camera on the Victoria Park Grandstand building to cover the testing area, allowing prospective attendees the chance to monitor how busy the testing site is.

In a statement, the council said the measure “also provides SA Health with some additional eyes on the ground at the location to help with the effective management of the site”.

Vision will be streamed here.

Marshall said he was “very pleased that we’ve gotten through a massive surge in demand” but warned “there will be a further surge” as people isolating after visiting exposure sites return for their Day-Five test.

An additional site opened today at Netball SA’s Mile End facility, with another in the works at Warradale. 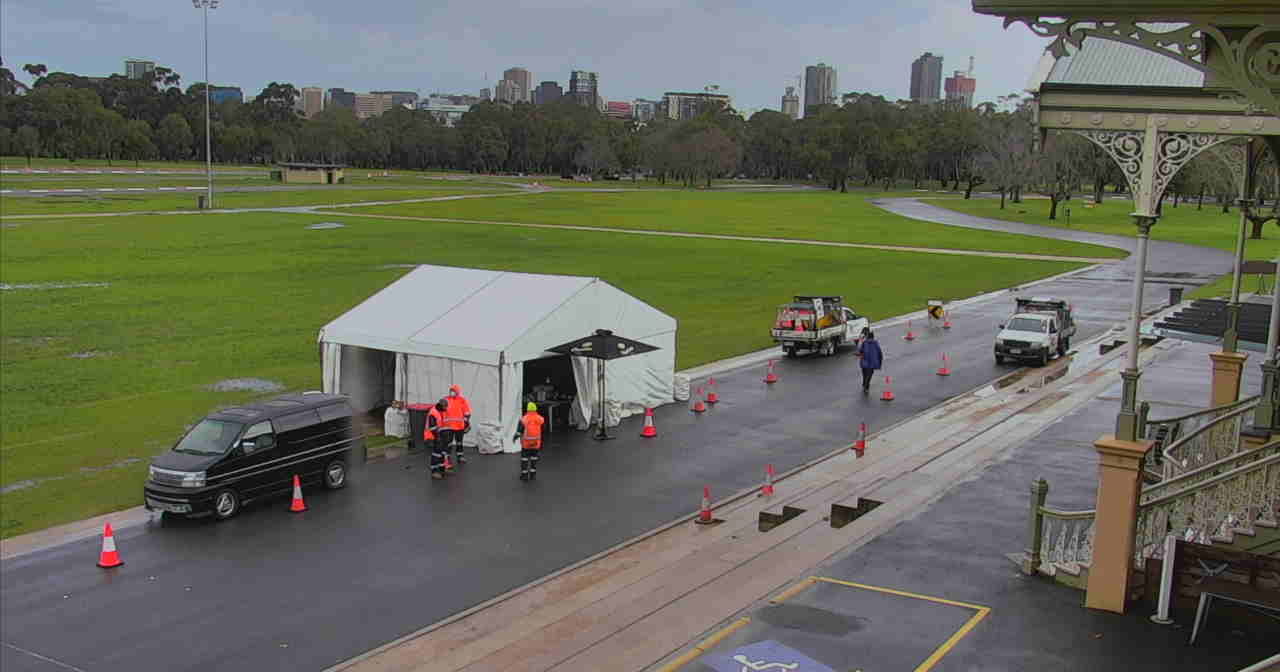 A shot from the ACC camera after the site was closed due to bad weather.

Meanwhile, NSW reported a new record for the current outbreak of 163 new locally acquired cases, at least 45 of whom were circulating in the community for all or part of their infectious period.

A man in his 80s from southwest Sydney has also died after contracting the virus.

Marshall has joined other states in steadfastly refusing a NSW demand for extra vaccines from existing supplies, saying: “I don’t think this is an issue which should devolve down into political point scoring [but] we can’t possibly be sending our vaccines to another state.”

“There was a discussion at national cabinet yesterday and it’s very clear we will not be sending our vaccines from SA to NSW,” he said.

Marshall said SA remains “on track to come out of lockdown in Tuesday next week, so our students will be back in school on Wednesday”.

“I feel very proud to be a South Australian at the moment – a state that’s taking this extraordinarily seriously and a state that’s on track to come out of lockdown on Tuesday next week,” he said.

“There was a preliminary directions meeting yesterday, but we don’t have anything to report today,” he said.