Schools, universities and “non-essential” shops and services have been closed and construction and non-urgent elective surgery will grind to a halt for at least a week.

South Australians will need to wear masks if they leave their home.

Pubs, restaurants and cafes are closed except for takeaway.

Weddings and funerals are banned and churches and places of worship are closed, except for online services.

Interstate and regional travel is prohibited and fly in/fly out workers are on hold.

This evening, SA Health added 24 new exposure sites to its growing list – including Westfield Tea Tree Plaza Shopping Centre at Modbury and various shops within including the food court; Coles at Greenacres; Meals on Wheels at Hindmarsh; Coles at St Agnes and Greenacres Shopping Centre.

Meals on Wheels this afternoon revealed a worker from its Hindmarsh kitchen had tested positive after being at an exposure site on Saturday night, forcing the closure of the kitchen for a deep clean and other staff into quarantine.

SA Health said the Meals on Wheels worker was one of the five confirmed cases, not a new case, but was unable to say which one.

A sombre Premier Steven Marshall announced the statewide snap shutdown this morning, saying it was the only way to “stop the disease dead in its tracks.’

“This is highly transmissible,” he said, confirming the cluster was linked to the Delta strain.

“This is a dangerous time.

“We’ve seen this in Victoria. It’s been moving extraordinarily quickly and that’s why we take this move today.”

Marshall said a fourth case – a man in his 60s – linked to the original case of an 81-year-old man, had now tested positive.

But authorities are particularly concerned about a fifth case – another man in his 60s who dined at city restaurant the Greek on Halifax on Saturday night, at a celebration.

Under the lockdown from 6pm tonight, people are allowed to leave their homes for the following five reasons only:

Schools will also be closed from Wednesday but will remain open for children of essential workers.

Teachers will have a day to get online learning systems up and running, which will start on Thursday.

“We hate putting these restrictions in place but we believe we have just one chance to get this right,” Marshall said.

“This is moving very quickly.

“We do need to work together. We are facing an extraordinary challenge at the moment but I am one 100 per cent convinced that South Australians will rise to the challenge.”

Marshall said he had spoken to the Prime Minister and had been reassured that affected South Australian businesses would be entitled to the same support offered in Victoria and New South Wales.

In a joint statement from Prime Minister Scott Morrison, Government Services Minister Linda Reynolds and Emergency Management Minister Bridget McKenzie, the Government said individuals would be eligible for the COVID-19 Disaster Payment if they have lost between 8 and less than 20 hours of work for a payment of $375, and for 20 or more hours of work for a payment of $600, during the period of the lockdown.

No liquid assets test will be applied to eligibility for these payments, which will be paid in arrears for the lockdown.

Anyone affected can apply through myGov from Wednesday July 28, with the Government urging prospective claimants to ensure their accounts are set up to assist swift claims.

Public transport, the airport and essential freight are continuing to operate.

“This is the time to stay put,” she said.

“This is the Delta strain.

“This is the time not to move around. The virus doesn’t have legs. If we stay put the virus will stay put and we will be able to get on top of it.

“If you’ve got any symptoms whatsoever go and get tested.”

There are now five cases in the Modbury cluster, and authorities are bracing for more.

Spurrier said SA Health had directed more than a thousand people into quarantine and a further 3000 people had self identified as being at exposure sites and so they would also go into quarantine.

Anyone who was at the Greek on Halifax on Saturday night between 6pm and 10pm is being ordered to quarantine and get tested.

Spurrier said it was yet to be determined where the original case – an 81-year-old man who tested positive at Modbury Hospital at 2.30am yesterday – caught the virus.

He did 14 days in quarantine at a medi-hotel and a hospital in New South Wales after returning from Argentina, before arriving in South Australia on July 8.

He spent more than a week in the community, before he was taken to Modbury Hospital on Sunday with respiratory symptoms, where he tested positive on Monday morning.

Spurrier said it was possible he picked up the virus at the Prince Alfred Hospital in Sydney where he spent part of his quarantine period after a fall.

His daughter, in her 50s, who travelled with him from Argentina and NSW has also tested positive, as has a close contact – a man in his 50s who works at the Tea Tree Gully Council, which has forced the closure of services.

A man in his 60s who is also a close contact of the 81-year-old, tested positive this morning, as did the diner in his 60s who was at the Greek on Halifax.

Authorities said the diner was in the restaurant at the same time as one of the other confirmed cases and they’re very worried about further potential spread.

One of the confirmed cases is a staff member from the Hindmarsh kitchen of Meals on Wheels, who worked a shift on Monday morning after being exposed at the Greek on Halifax on Saturday night.

Meals on Wheels SA chief executive officer Sharyn Broer said all volunteers and staff members working at the kitchen on Monday had been notified and directed to get urgently tested and quarantine as per the advice received from SA Health.

“As a precaution, customers who received meals from the Hindmarsh branch on Monday are also being notified and asked to monitor for symptoms and get tested as soon as they develop,” she said.

“The Hindmarsh kitchen is closed and will undertake a complete industrial clean in accordance with SA Health before re-opening.

“In the meantime, alternative arrangements are being made to ensure customers of the Meals on Wheels Hindmarsh branch will continue to receive their meals in line with strict food and safety handling guidelines.

“During the seven-day lockdown, Meals on Wheels SA will continue delivering hot and frozen meals to those in need right across the community.”

Dozens of exposure sites have now been identified, and will be updated as more information becomes available.

Anyone who has visited the sites during the affected times is being told to quarantine, in many cases with their family members, and get tested.

SA Police Commissioner and state emergency coordinator Grant Stevens said it was unlikely the lockdown would be able to be lifted earlier than the seven days and it was too early to tell whether it would need to be extended.

“The pragmatic approach is that we will need all of those seven days to get on top of this and be confident that we’ve identified any possible community transmission,” he said.

“Obviously we are hopeful that we get out of this as quickly as possible and we will be making virtually a daily assessment in relation to the circumstances and when it’s appropriate to step out of this lockdown.”

Testing stations were swamped overnight and this morning as South Australians heeded the call to get tested. 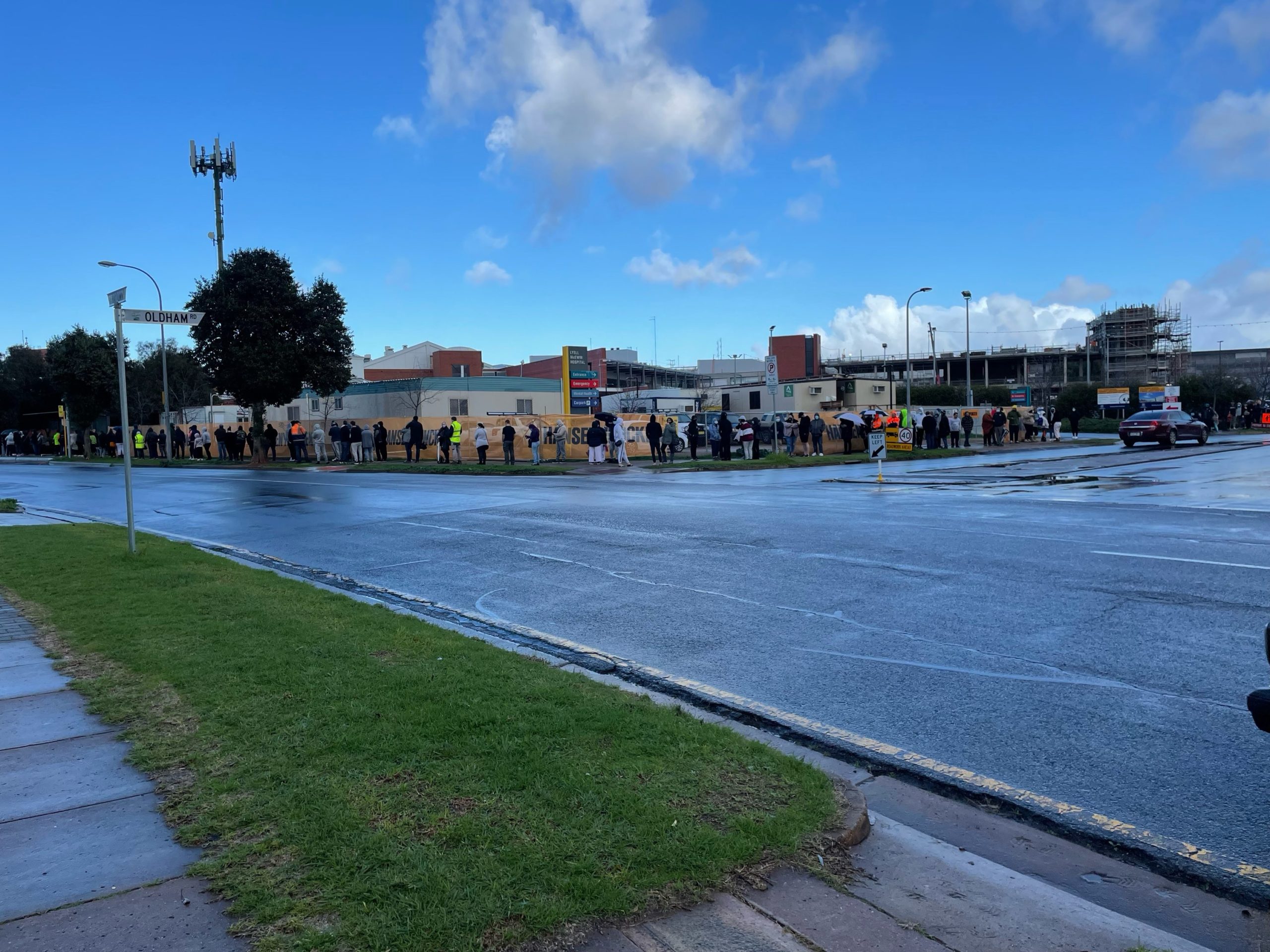 A queue for COVID testing at the Lyell McEwin Hospital on Tuesday morning stretched around the block. Photo supplied

The lockdown comes after business groups and unions expressed concern about what supports would be made available for workers stood down under the new restrictions.

“I spoke to the Prime Minister about that this morning – we expect to get the same level of support as has been shown to both Victoria and New South Wales,” Marshall said.

“But I’m also still very hopeful that we can have this seven-day lockdown situation and then emerge from that and get people back into working in our economy as quickly as possible.”

He said Treasurer Rob Lucas would be making an announcement on business support within the next 24 hours.

The Federal Government has made $600 payments available to full time workers in NSW and Victoria who have lost 20 plus hours of work.

Another $375 Commonwealth payment has been made for those who have lost eight to 20 hours of work.

However, the payments are only triggered by lockdowns that last more than seven days.

Australian Hotels Association SA branch CEO Ian Horne said the more than 20,000 hospitality workers across the state would be stood down as a result of restrictions introduced on Monday.

“The hotel accommodation side of the business is, without exaggeration, in freefall,” Horne said.

“With the border closures and cancellations, we’re looking at [occupancy] figures sub 20 per cent.

“There’s the potential this time for it to be significantly worse than what we experienced in November with the three day [lockdown].

“That three days, and the subsequent cancellations that went on for another month cost hotels and hospitality well in excess of $100 million.

“We had to trash over $11 million in, in food, and that will be happening today.”

The SANFL today declared that “all training and matches across every level of football in SA remain cancelled until further notice”, including all state league competitions, talent programs, Juniors, Auskick, school and community football “for at least the next seven days”.

SANFL CEO Darren Chandler said the league would consider a range of options in coming days “for the remainder of SANFL season in consultation with participating clubs”, saying: “We will continue to review the situation over the coming days but are fully committed to seeing the season out.”

After a day of confusion for the state’s AFL clubs – which saw them recalled from an airport dash as the league considered bringing forward their Round 21 Showdown clash – both Port Adelaide and the Crows will now face their weekend opponents at Melbourne’s Marvel Stadium, on Friday and Saturday respectively.