It comes after the Federal Government rejected calls from more than 30 countries including Canada, France and Germany to raise the age of criminal responsibility from 10 to 14 years.

Over 30 member nations supported a recommendation for Australia to raise the minimum criminal age to 14, but the Federal Government’s representative told the committee that responsibility to legislate change rested with the state and territory governments.

In South Australia, children aged under 14 are presumed incapable of forming the mental intent to commit a crime, however, prosecutors can argue that they are capable of understanding that their actions were seriously wrong in a criminal sense.

Chapman told InDaily that she had received feedback from the Youth Court, SA Police and the Commissioner for Victims Rights suggesting that South Australia needed to provide better protection and support programs to young offenders before it legislated to raise the criminal age.

“We would fail our children if we simply changed the law and raised the criminal age of responsibility, without addressing alternate supervision and support for 10 to 14-year-olds,” she said.

“Protecting our children and keeping our vulnerable safe is, and always has been, a priority of this Government.”

Latest data from the State Government shows for the five years between 21 September 2015 to 20 September 2020, approximately two per cent of the children prosecuted for an offence received a custodial penalty in a youth training facility.

The rest were given a caution, sentenced to home detention, or ordered to participate in community service or drug or alcohol diversionary programs.

Youth Training Centre Visitor Penny Wright has previously reported that South Australian children aged between 10 to 13 were incarcerated 133 times over 2019-20.

Most of them had disabilities, were Aboriginal and/or were cared for under the guardianship of the Child Protection Department.

Law Society president Rebecca Sandford wrote to Chapman about lifting the criminal age last month, urging her “not to allow consideration of it to languish”.

Sandford wrote that keeping the age of criminal responsibility at 10 years of age remained “a matter of local, national, and international concern”.

“The decision as to what the minimum age of criminal responsibility should be in South Australia is ultimately a matter for South Australia,” she wrote.

“We call upon the South Australian Government to set an example, reinforce its stated commitment to the best interests and voices of vulnerable children and young people, and take the lead on this important issue.”

Chapman has previously said that she would prefer to wait until all states and territories reached a national consensus on whether to lift the criminal age before introducing legislation to parliament.

However, hopes of that dashed earlier this year after the Council of Attorneys-General failed to reach a national consensus after four years of deliberation.

The Queensland Government has committed to keep the minimum age of criminal responsibility at 10, while the ACT is currently consulting the public about whether it should raise the age to 14.

A NSW parliamentary inquiry supports a rise to 14 as the age at which children can be arrested, detained and charged. 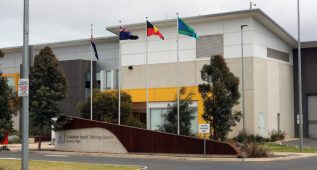 “In the absence of national reform – following the Queensland Labor Government’s decision not to raise the age – this matter remains under consideration,” she said.

Shadow Attorney-General Kyam Maher said Labor was also yet to form a position on whether it supports raising the criminal age.