The council will tomorrow night consider a final vote to revoke the community land status of the beach volleyball site on the corner of Pirie and Frome Streets, so that it can then sell the land to a private developer to raise cash.

According to council agenda papers, Chapman last week approved the proposal to revoke the site’s community land status, but a final council vote is required in accordance with legislation.

It comes after the council conducted an “extensive community consultation” during February and March to gauge the public’s view.

Those in opposition warned that doing so would result in the loss of community space in the CBD, with concern raised that the council was prioritising the private sector and income from the sale ahead of the public’s interest.

“The volleyball courts provided an important community service and vibrancy to the city which would be lost with redevelopment,” one respondent wrote in their submission.

“This facility is unique, interesting and provides a slice of life and livelihood that the city should foster given it is encouraging people to live in the city,” another wrote.

Despite the overwhelming majority of respondents objecting to the plan, the council in May voted to proceed with the sell-off to raise funds after a pandemic hit to its coffers.

Without funding nothing will go ahead, other than us potentially ceasing to be, which is obviously what no one wants

The decision to relocate the courts was subject to Volleyball SA receiving “sufficient funding” to transform the Bonython Park car park off Port Road into a new beach volleyball site.

But two months later, Volleyball SA says it is yet to receive funding from either the council or State Government to build the new facility.

The not-for-profit association, which currently leases the Pirie Street beach volleyball site from the council on a subsidised monthly basis, estimates that building a new facility would cost in the order of $4 million.

“It’s lovely and we all agree that Bonython Park is a good site, but we actually can’t save beach volleyball unless we’ve got the money,” Volleyball SA general manager Anne-Marie McAinsh told InDaily.

“The last thing we heard was that council was not able to provide any funding at all and we haven’t yet achieved any funding from State Government or Federal Government either.

“Volleyball SA certainly don’t have funds to be able to relocate, let alone build a new facility, so at this stage we’re still stuck basically.

“Without funding nothing will go ahead, other than us potentially ceasing to be, which is obviously what no one wants.”

The Bonython Park car park has been proposed as a replacement volleyball venue. Photo: Google Maps

She said Volleyball SA was “still talking to the Office of Recreation and Sport and the Adelaide City Council” about funding, but it was yet to receive any commitments.

McAinsh added that the Bonython Park site was “obviously not as good a site as the CBD”, but of the sites that the council proposed, it was deemed by Volleyball SA as the best location.

“When we move out of the city, of course we’re going to lose a lot of the office workers that play there, so to be sustainable we need something else,” she said.

“The fact that the area (around Bonython Park) is going to be developed residentially, that site is far enough away from the residents that we’re not going to cause a problem with noise.

“It’s still on a main road for visibility, it’s accessible for people that don’t have cars, which is important for us because we’re multicultural and all about access for all, so to be on the tram line is great.”

But McAinsh said “anecdotally, a lot of people in our community feel pretty strongly about keeping it (the Pirie Street volleyball site)”.

She said on average, up to 2000 people a week used the Pirie Street beach volleyball courts.

“It’s not the athletes that are there, it’s the everyday mums and dads and office workers and young people who are going there just for a bit of fun and activity,” she said.

A State Government spokesperson told InDaily that Chapman approved revoking the Pirie Street volleyball site’s community land classification because “on balance, it will have more of a positive impact than negative on the local community”.

“This takes into account that given VSA (Volleyball SA) had exclusive rights over the Pirie Street location, it could not be used as public open space, and the Council’s plans to repurpose a former netball court to make way for a new city volleyball facility,” the spokesperson said.

“If the Council wishes to proceed with the revocation, it will need to pass a motion.”

“However, it’s always been agreed that funding of the associated works would be sought by VSA through relevant State Government agencies,” he said. 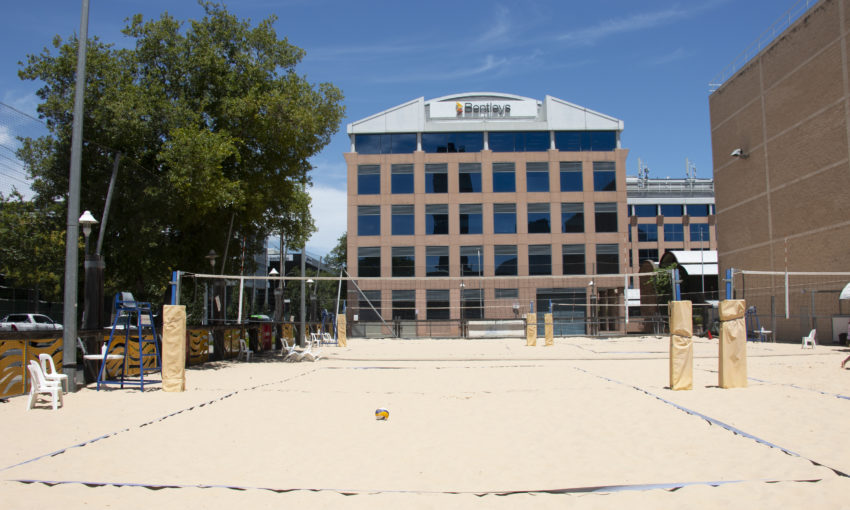 The council earmarked the sale of the Pirie Street beach volleyball courts after conducting a property review early last year.

The review found the site offered “limited financial return”, as it is leased to Volleyball SA on a subsidised arrangement, resulting in a rental shortfall of approximately $1.6 million over 20 years.

It also found that the facility did not benefit all city users and the land was “underdeveloped and not representative of highest and best use”.

The council is offering prospective buyers the option to also purchase the adjoining Pirie-Flinders UPark car park building as a “value add opportunity” through an expressions of interest process.

It wants the redevelopment to include “innovative commercial space” such as offices for “advanced economy businesses” and start-ups, “quality housing opportunities appealing to a broader market”, shops and open green space.

“The sale of the land will enable a mixed-use development supporting catalytic investment within the City East precinct,” the council’s agenda papers state.

“The addition of the Pirie Flinders UPark as a value-add opportunity requires an improved value proposition compared to the existing UPark asset and income stream.”

The site is located within the Capital City Zone, which has no prescribed height restrictions.

Proceeds from the sale will be put into a new “future fund” to help the council recover financially from the COVID-19 pandemic.