In an all-staff email sent this afternoon – seen by InDaily – Adelaide University Vice-Chancellor Peter Høj warned that the university would face an annual shortfall of $47 million by 2023 if it did not make “difficult” decisions to claw back spending.

He wrote that the university was currently projecting a $22 million shortfall in 2022, due to the ongoing economic impacts of the COVID-19 pandemic.

Høj sent the email after hosting a 90-minute staff forum earlier today, during which he discussed the university’s financial position and possible cost-cutting measures.

“My message to staff was one I found difficult and sad to deliver, and for many it will not have been easy to hear, particularly so shortly after the measures our University took in 2020 with strong cooperation from staff,” he wrote.

“Unfortunately, the continuing impact of COVID-19 on the sector’s future revenue from international students makes it critical for our University’s students and staff – and for the State – that we address our looming financial shortfall to ensure our institution’s future sustainability.”

To avoid the multi-million dollar shortfall, Høj wrote that the university was aiming to find approximately $30 million in additional savings, while securing $20 million from new revenue sources.

Among the cost-cutting measures up for consideration are axing up to 130 full-time professional staff, and potentially some academics.

The university is also considering merging five faculties into three, cutting back on administrative services, “rationalising underperforming programs and courses” and reviewing its academic workforce.

Meanwhile, it is considering a “greater drive in philanthropy” and identifying new sources of revenue to boost its coffers.

“If the University proceeds with making changes, we will do so under the provisions of the Enterprise Agreement. This is likely to occur around mid-September,” Høj wrote.

“As mentioned at the forum, in July and August we will hold further sessions where staff can discuss these issues, including Faculty and Divisional roadshows and visits, smaller group discussions, and leaders’ briefings.”

It comes after the university in May reported a “better than expected” surplus for a pandemic-hit 2019-20 financial year.

Audited financial results for 2020 showed a statutory net operating surplus of $40.8 million for 2020 – down from $42.9 million the year before.

Total revenue came in at $977 million, while research generated a further $234 million.

But Høj said while in “simplistic terms”, the results looked “better than expected”, the COVID-19 pandemic had caused a “much more complex and challenging situation than these numbers show”. 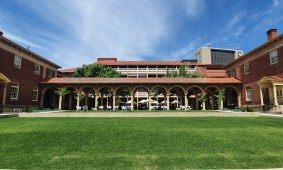 Høj told today’s staff forum that it was “not pleasurable for us to deliver the messages that we’re doing today, particularly given that the staff at the University of Adelaide reacted so constructively when the university asked them to collectively put us in a better position at the outset of COVID-19”.

“At the start of the year we were quite optimistic about where we were going, then at or on about the time that the (Federal) Treasurer announced the Budget and the forward estimates for the budget two things became clear,” he said.

“That is where we started to realise that the situation was more dire than even we had feared.”

“Blame for this terrible predicament lies firmly at the feet of the Federal Government who have quite deliberately cut funding to the University sector for both teaching and research along with actively excluding Universities from JobKeeper support last year when it shut borders to international students,” he said.

“We believe that listening to the views and ideas of staff is the only way for a path forward that minimises the pain that job losses will bring.”