The documents, provided to Labor under Freedom of Information legislation, show that public servants in the Premier’s department were asked to prepare notes for Marshall to speak at Liberal MLC Jing Lee’s 10th anniversary “welcome back” gala dinner at the Adelaide Convention Centre in May this year.

The documents show that the request was sent from a senior ministerial liaison officer in the Premier’s office to a public servant in the department’s multicultural affairs area. The emailed request included an official form from the Office of the Premier, requesting the agency take action to prepare an event briefing and speech notes for the anniversary dinner.

The event, billed as a celebration of Lee’s 10 years in parliament, has attracted some controversy because publicity for the $180-a-head event did not mention the Liberal Party, despite proceeds going to the party. Labor alleges some attendees didn’t understand it was a political fundraiser, but Lee argued in parliament that this was self-evident because people know she is a member of the Liberal Party.

South Australia’s ministerial code of conduct prohibits the use of department resources for party political activities.

“Ministers and ministerial staff must use all reasonable endeavours to avoid, and to avoid giving any public appearance of, using government departmental offices for private purposes or party political purposes,” the code says. “Party political lunches or functions or events should not be paid for out of departmental funds, and neither should anything connected with an election campaign.”

It is a long-standing principle that public servants are not permitted to be involved in party political activities during their work. The South Australian public sector’s code of ethics requires public servants to be “detached from political influence and the influence of partisan interests within the community”.

The FOI documents show that a few days before the function, the Premier’s ministerial liaison officer – a public service position – made, and then withdrew, the request for bureaucratic assistance after realising it was a party political event.

The liaison officer wrote: “I was in auto pilot mode this morning but have since realised this is party related so we do not expect a speech from Multicultural.”

The Government insists that the request was a mistake and “the department advises it did not expend any resources on this event”.

“A staff member sent a request for speaking notes and a briefing,” a spokesperson said. “Several hours later they realised the error and cancelled it.”

The official request for briefing and speech notes sent from the Premier’s office to multicultural affairs.

The “function brief” sent to the multicultural affairs office from the Premier’s office, with an official State Government logo, shows a series of details about the event, including an outline of speech themes – including “Jing’s achievements throughout 11 years in Parliament”, and “Personal anecdotes about Jing”.

Under that section, the suggested talking points include “Best and only Assistant Minister for the Premier!”

The brief also includes the running order, the list of people sitting at the Premier’s table, and a rundown of invited VIPs, all of whom were Liberal MPs, apart from the Premier’s chief of staff, Courtney Morcombe, and “other Liberal candidates”.

The Government says the function brief, including the suggested talking points, were prepared by Jing Lee’s office, not the Department, in line with usual practice where inviting organisations are provided with a template from the Premier’s office. 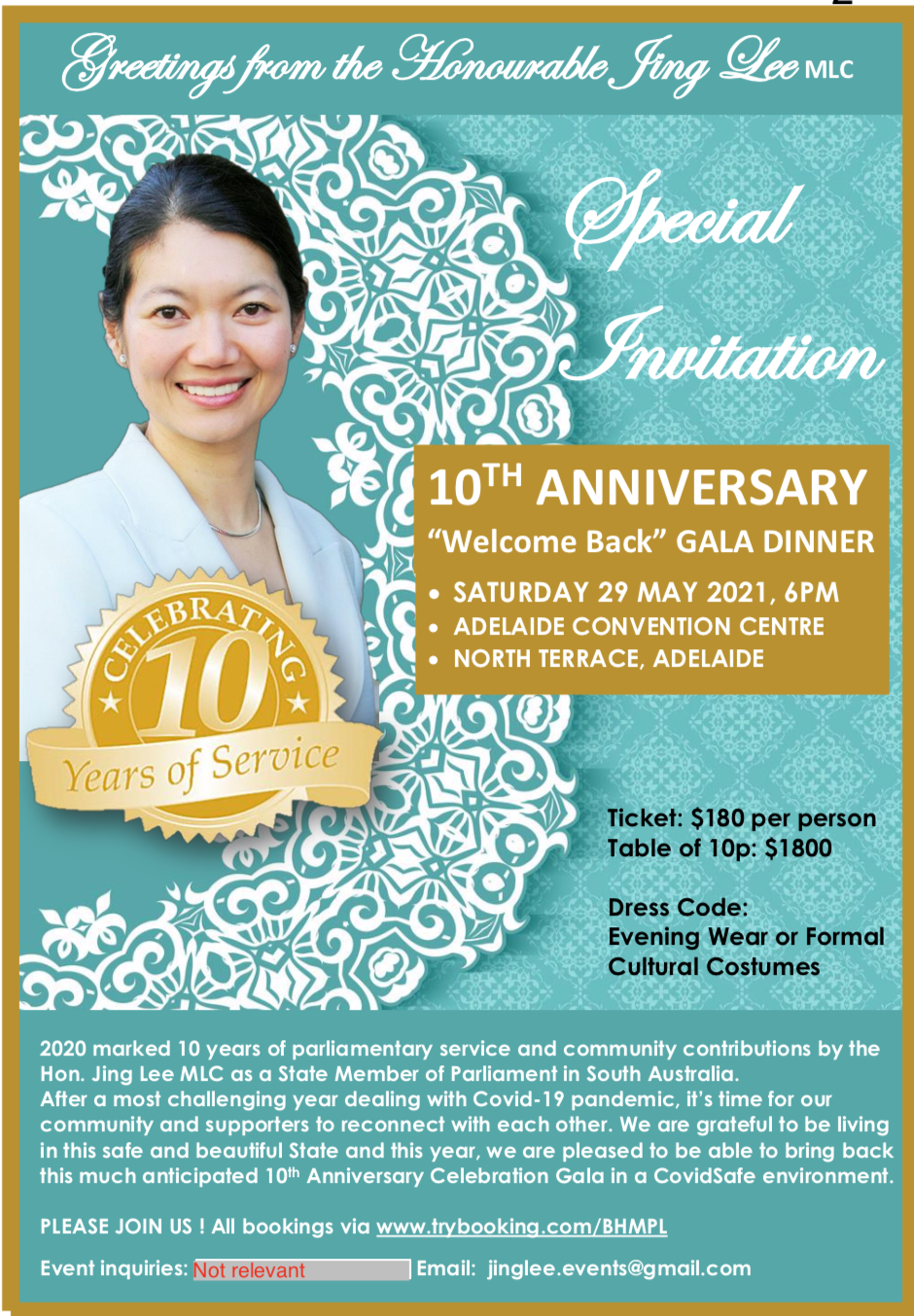 The event invitation attached to the correspondence sent from the Premier’s office to an administrative section of the Department of the Premier and Cabinet.

The event, which attracted about 900 guests, led to questions from Labor to the Premier in parliament.

In June, Marshall didn’t directly answer a question from Labor’s Tom Koutsantonis about whether a database of multicultural groups held by the Department of the Premier and Cabinet or the South Australian Multicultural and Ethnic Affairs Commission was used to develop the invitation list for the event.

Koutsantonis, the Opposition’s government accountability spokesperson, told InDaily that the event was so large that it rivalled a state dinner and would have required significant resources to stage.

“The question for us is has there been any cross-over from government lists or resources to Jing Lee (in the preparations for the event)?

A Government spokesperson said Labor should be addressing other concerns – such as leader Peter Malinauskas being forced by the Electoral Commissioner to apologise for a misleading Facebook post about SA Health resources – rather than focusing on an administrative error that was fixed within hours.

InDaily has contacted Lee for her response.