The State Government this morning unveiled details of the 4km tunnelling area for the Torrens to Darlington Project – the final 10.5km section of the 78km North-South Corridor between Gawler and Old Noarlunga.

A purpose-built site in Clovelly Park near the Torrens Boulevard – described as the  “southern laydown area” – will be the launch location for two machines that will bore two parallel, three-lane tunnels under South Road.

The state government estimated that 390 properties must be acquired as part of the final stage of the project, including 64 to make way for the tunnel boring launch process.

“The project team has commenced engagement with affected property owners in the southern laydown area and negotiations regarding acquisition have begun,” he said.

Among the properties to be acquired is the Tonsley Hotel on the corner of South Rd and Selgar Avenue, with a Department of Infrastructure and Transport Map showing the area will become a “site workshop” and “storage and loading bays”. 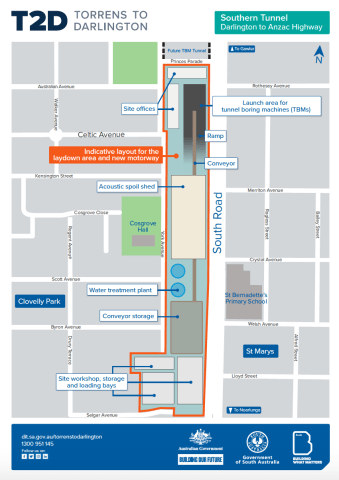 The location of the Tunnel Boring Machines and the compulsory acquisitions required (Image: Supplied/State Government)

The Tonsley Hotel employs 55 people and is owned by the Hurley Hotel Group, headed by prominent Adelaide hotelier Peter Hurley.

Group general manager Sam McInnes said the organisation was in the early stages of planning for the future after being notified of the acquisition today.

“We’re just in the early stages of planning what’s in our future and just working through the compensation package with the State Government,” McInnes said.

“It’s disappointing, obviously it’s a fair bit of turmoil for us to deal with.

“There’ll be customer sadness no doubt about losing their favourite local.”

Wingard told reporters today that property owners in the southern laydown area would have “just over 18 months” to vacate the area.

McInnes said the hotel group was “taking it one step at a time” to plot a path forward.

“Really until that map came out today, we weren’t really sure what was happening,” he said.

“There’s obviously nervousness from other [business] operators … it’s sort of early days for us so we’re just absorbing it.”

Wingard said it was appropriate to announce property acquisitions as soon as the Department’s project team knew what parts of land it needed.

“We know right here and now that this is a launch site we need to have for the southern tunnels, and we’ll continue to work with the people in those properties,” he said.

“When we announced this project we made a commitment to let the community know as soon as possible, when activities would begin in particular locations and which properties were likely to be impacted.

“When we know, you’ll know and as soon as we get certainty on elements of the Reference Design, we’ll be engaging with impacted land owners directly, before information is shared with the broader public.

Wingard said the reference design is due to be completed later in the year.

Last month, the State Budget revealed the cost of the Torrens to Darlington stage of the project had blown out by $1 billion to $9.9 billion.

This was due to updated plans for the tunnels which included increasing the number of lanes from two to three to accommodate greater traffic volumes than first predicted.

The project is expected to be completed in 2028 and the State Government says it will create 4500 jobs.