Attorney-General Vickie Chapman announced the panellists this afternoon, after confirming to InDaily last week that she had accepted a recommendation by Judicial Conduct Commissioner Ann Vanstone to set up the first judicial conduct panel in the state’s history.

They have been granted similar powers to a royal commission and will be tasked with conducting an inquiry into complaints from five women about the same serving Magistrate.

The complaints were initially referred to Vanstone, but after a preliminary inquiry, the Commissioner recommended that a judicial conduct panel investigate further.

Vanstone said the complaints, which came from women who work in “various capacities at the courts”, span a period of about seven years, but the Magistrate has denied impropriety.

InDaily revealed last month that one of the complaints was made by former District Court judge’s associate and now federal prosecutor Alice Bitmead, who said she was made to feel like a “sexual object” after the Magistrate allegedly made repeated “inherently sexual” and “deeply uncomfortable” remarks to her at a work dinner and during office hours.

The panellists were appointed in accordance with the Judicial Conduct Commissioner Act, which requires a judicial conduct panel to comprise two current or former judicial officers, as well as one layperson.

Chapman said this afternoon that the panel should send a “clear message” to complainants that their voices will be heard, and that allegations of inappropriate behaviour would be “investigated in a way that is fair and impartial”.

“It will investigate each of the complaints made by five women who have worked in the courts, with the complaints spanning a period of about seven years,” she said.

The panel will produce a report outlining findings from its inquiry, which will be tabled in Parliament.

They will also be required to form an opinion as to whether the Magistrate needs to be removed from office. 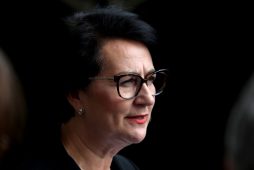 Attorney-General to set up conduct panel to investigate Magistrate

The Magistrate, who InDaily has chosen not to name, was stood down from sitting duties last month after Vanstone launched her preliminary investigation into Bitmead’s allegations.

But InDaily later reported that the Magistrate was still working at the courts, despite being asked by the Chief Magistrate to take leave while his alleged behaviour is investigated.