The Opposition has pledged to abandon a Liberal plan to build a new city arena and conference centre if elected, saying the more-than $660 million would instead be funnelled into the health budget.

In his budget reply speech, delivered a short time ago, Malinauskas committed that at least $100 million of that would be allocated to country health.

“We guarantee no less than $100 million of the $661 million we save from not proceeding with the basketball stadium will go directly to country health,” he told InDaily before addressing parliament.

Treasurer Rob Lucas has questioned Labor’s commitment, saying since just a fraction of the total cost of the new arena is allocated in the current four-year estimates, there isn’t money in the budget to spend straight away.

But Malinauskas insists: “The Government is committed to a $660 million basketball stadium – they’re commencing construction in the next term of government – and we won’t proceed with it… that will save us $661 million we can expend elsewhere.”

“We’re investing in country health because it’s the right thing to do,” he said.

“This budget, on the back of ones prior, is one of the most city-centric budgets the state has ever seen. The Liberal Party, which is supposed to represent country SA, has left regional communities waiting when it comes to economic and social investment… all the money that’s gone on the arena is new money, and we’re going to allocate that to health.

But he could give voters another choice, after Lucas’s budget forecast a modest surplus from 2022-23 – despite the books currently being more than $1 billion in the red.

While it’s spruiking a straight swap of arena funding for health spending, Labor has also committed $593m for a “fully costed” hydrogen power project – with Malinauskas unwilling to commit to returning a budget surplus next year.

“Naturally we’ll release all our costings before the election,” he told InDaily.

“Of course we want to pursue surpluses – Labor in Government has a record of delivering surpluses – and that will be an objective… I’d support using fiscal policy to adjust to the economic circumstances of the day, but naturally our strong preference is to return the budget to surplus as quickly as possible.”

Asked whether he would commit to doing so in government, he said: “We will reveal all of our costings before the next election, but we’re absolutely committed to fiscal responsibility, which is why we’re being honest with people before the election.”

“All will be revealed as we announce our policies and their costings in the lead-up to the election,” he said. 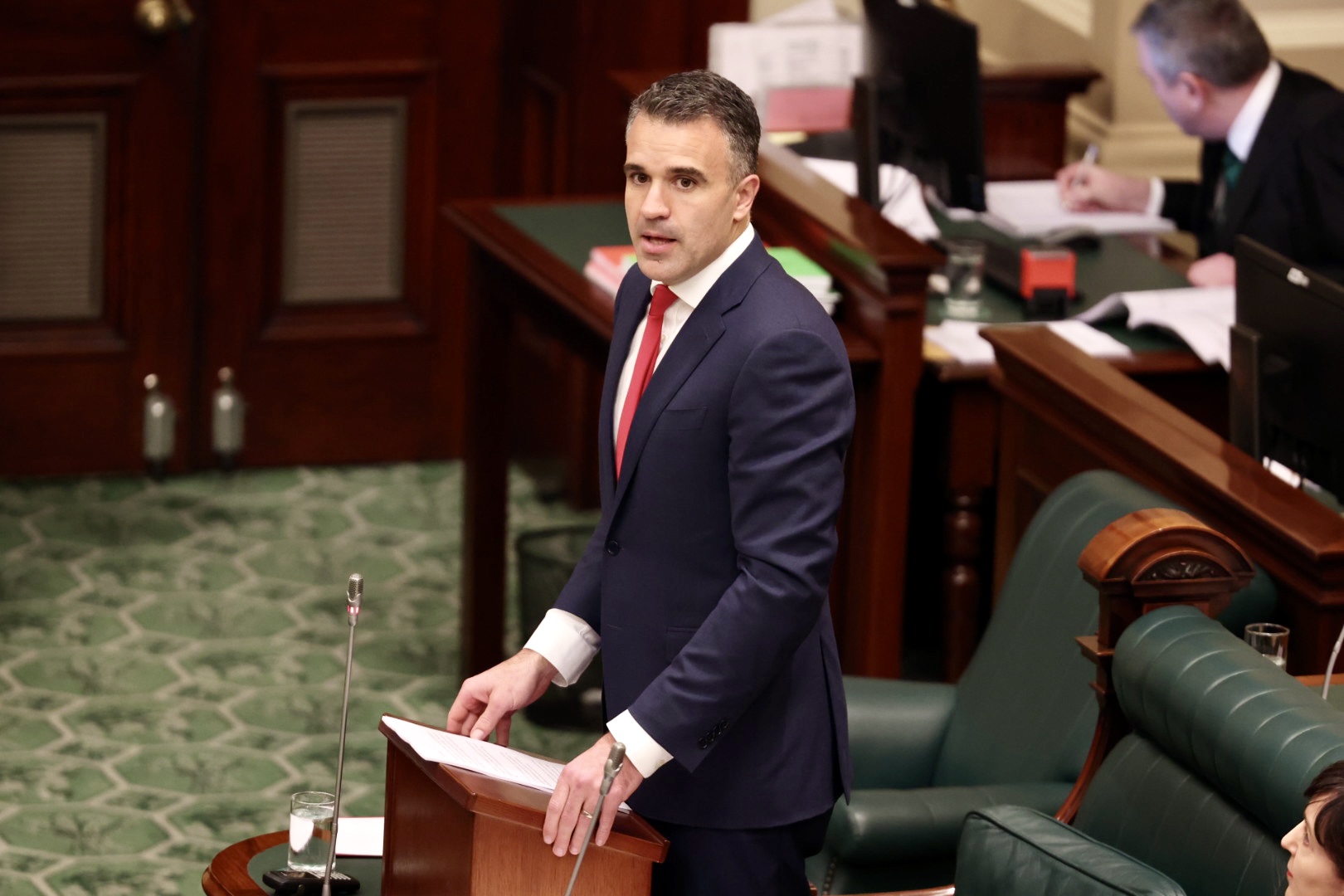 The commitment to country health was welcomed by former Liberal turned crossbench MP for Mount Gambier Troy Bell, who said: “In my seven years in parliament, this is the worst budget for our region that I’ve seen.”

He said it contained just two projects for his region “that had already been announced, and both of them are co-funded by local councils”.

“Of greatest concern is really the investment in [country] mental health,” he said.

“None of that has been talked about or identified in this budget.”

He said Labor’s budget reply pledge was “a genuine commitment of money”, adding that “under Malinauskas, there seems to be perhaps a greater engagement with the regions [from Labor] than I’ve seen in the past”.

But the Liberal MP for Mackillop in the southeast, Nick McBride, was more circumspect.

“I take the budget in my stride,” he said of the lack of regional funding.

“I expected it… we’re going into our fourth year of our four-year term, leading up to an election… and yes, most of that [spending] is in the city of Adelaide.

However, he noted there was still “a stark difference between the last four years and the 16 years before”.

“I have no problem with the fact it looks like a budget that just looks after Adelaide, but I’ll continue to look after my constituents… we’re just going to have to be patient,” he said.

Of Labor’s funding pledge, he said it was “a welcome change”.

“If they come into power I’d welcome [the funding],” he said.

“I’d like to see better medical infrastructure in the regions than we’re currently seeing – but I also believe we’ll get those outcomes under a Liberal Marshall Government over the next four years as well.”