In a six-hour sitting of the House of Assembly on Wednesday night, lawmakers worked through the 117 clauses of the legislation before voting 33-11 in favour of the Bill at around 1:30am.

See how MPs voted below

Amendments to the legislation made in the Lower House – which include allowing private hospitals to conscientiously object to the procedure – will now be sent back to the Upper House for a final vote of approval.

Premier Steven Marshall, who voted for the Bill and angered the conservative faction of his party by initially allocating government time to debate the issue, said he believes the legislation will face no problems passing later this month.

“I think its time has come,” he told ABC radio on Thursday.

“I expect that it will pass. The vote in the Legislative Council previously indicates that there is widespread support.

“I think these amendments are sensible and improve the Bill and I think that’s the general feeling.”

An unamended version of the Bill passed the Upper House 14-7 in May this year.

If the legislation becomes law, South Australia will be the fourth state in Australia after Victoria, Tasmania and Western Australia to legalise VAD.

Catholic health care not-for-profit Calvary Care welcomed the passing of Murray’s amendments but said it was “saddened” by the legislation’s success.

“The recognition of Institutional Conscientious Objection means that Calvary can continue to serve the people of South Australia in that we will be able to offer high-quality hospital and end of life care to our patients and clients without being compromised by VAD,” said Calvary Care chair Jim Birch.

“In all of our hospitals and aged care facilities, the people we care for and the people who provide care know our services will not offer VAD.

“We know that people will continue to seek out our services because of this ethic and our ongoing commitment to compassionate care.”

Individual health practitioners are already allowed to conscientiously object under the proposed legislation.

Aged care facilities, however, are not allowed to hinder a person accessing information about VAD and must, on request, allow a registered health practitioner reasonable access to a terminally ill person in their centre.

“If you’re in an aged care facility, even run by the Catholic Church, it is your home,” Close told ABC Radio on Thursday.

“You have more rights under the aged care act, and morally because it’s your home, to have access to the doctors you want and to the procedures that you want.

“I think what we’ve done is actually improved on the Victorian model which was silent on these matters and has left it to the government and institutions to try and work their way through.”

A further amendment was passed requiring the government to review expenditure on palliative care.

Other amendments to the Bill which asked for a mental health medical history safeguard and a productivity commission review into palliative care were voted down.

Murray, who spent an extensive amount of time consulting with medical practitioners and private hospitals to draft amendments to the legislation, ended up voting against the bill – describing himself as “considerably conflicted” on the issue.

However, he said the final version of the law was an improvement on the national model.

“I think we all can take some credit for the fact that the legislation that came in here has, I think, objectively come out the other end better because it has ‘Made in South Australia’ stamped on it.” 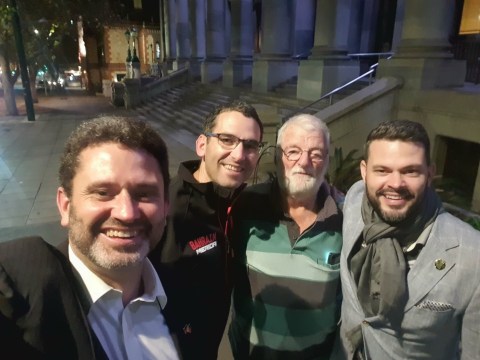 Kyam Maher with his dad and two brothers after the VAD Bill was passed early Thursday morning (Photo: Supplied)

“I have imagined this moment so many times over the last few months,” he tweeted on Thursday morning.

“So bloody pleased & proud and just a little emotional.”

Maher spearheaded the push to legalise voluntary euthanasia following the death of his Mum Viv in 2016, who passed away eight months after she was diagnosed with terminal pancreatic cancer.

Introducing the Bill to the Upper House in December last year, Maher said his Mum’s last days were “far from the peaceful dignified end of life she or any other person deserves”.

Voluntary Assisted Dying SA spokesperson Lainie Anderson thanked MPs who “listened to their constituents” and called for a phase-in period of under 18 months once the final amended Bill is passed by the Upper House.

“Thank you to the thousands of South Australians who’ve contacted their MPs and attended rallies across the state in recent months to share very personal stories of heartbreak and pain in a bid to finally get this reform passed,” Anderson said.

“We know this will be a bittersweet moment for families who’ve watched loved ones die in unbearable suffering in the absence of voluntary assisted dying laws, and we hope they see this is a small victory for those who are gone but still in our hearts.”

Labor frontbencher Tom Koutsantonis, who voted against the Bill, expressed his concern that the legislation “fundamentally changes the way we interact with our doctors”, but congratulated VAD’s supporters on an “amazing victory”.

“Congratulations to the proponents and to the people in my community and people who wear the red T-shirts and do the hard work,” Koutsantonis said.

“To those organisations that sought carve-outs to protect their communities to have safe havens, there are some provisions in this Bill that protect those religious institutions or those volunteer institutions that don’t want to have to participate within this regime.”

The final Bill contains 70 safeguards to prevent coercion or a wrongful death.

To be eligible for VAD, a patient must be diagnosed with a terminal illness that will cause death within six months or a neurodegenerative disease that will cause death in 12 months, have their decision-making capacity verified by two independent medical practitioners, and have made a request for VAD on five separate occasions.

A doctor also cannot raise the option of VAD with a patient, and the patient must be experiencing intolerable suffering that cannot be relieved.