Senior Right-wingers in the SA Liberal Party have been running a broad recruitment drive in largely Pentecostal Christian church communities, urging parishioners to sign up to the party to influence policy and preselections – with up to 500 new recruits joining up so far this year.

But Day says such communities would have more influence backing minor Conservative parties, such as his fledgling Australian Family Party, to hold Liberal government to account through preferences.

Day, a former Liberal candidate who went on to serve in the Senate for Family First, left parliament after the collapse of his building empire in 2016.

It sparked the rapid decline of Family First, which initially rebranded as Australian Conservatives and then disappeared altogether.

His new party is seeking to remove the Liberal incumbent in the Marshall Government’s most marginal seat of Newland – where Labor is yet to find a candidate after its only nominee withdrew last week. 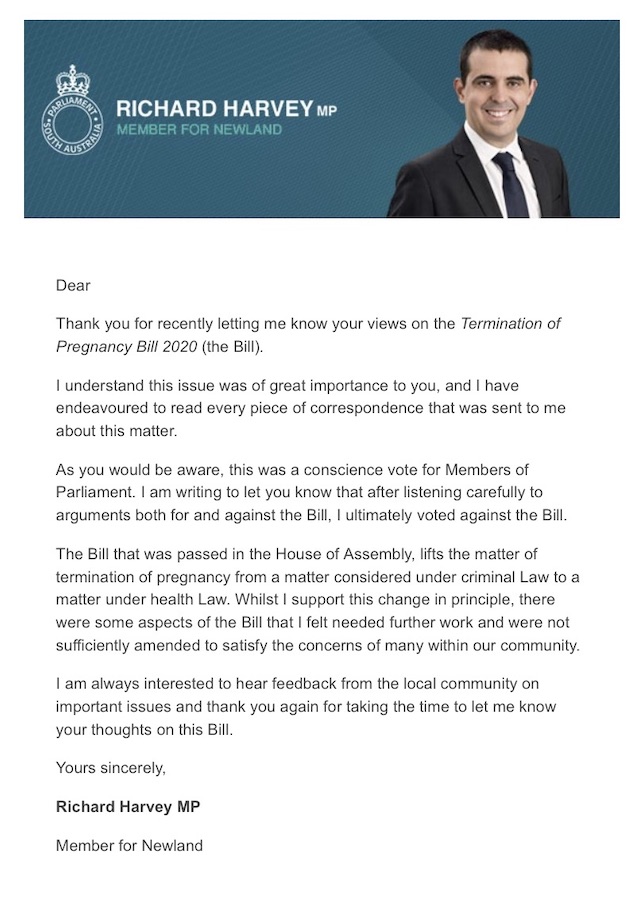 A letter sent by Richard Harvey to constituents

However, Harvey backed Chapman in a range of amendments moved by the Bill’s chief opponent, Liberal Environment Minister David Speirs, including a bid to limit access to termination after 24 weeks.

Day has written to many of Harvey’s constituents, after Liberal MLC Dennis Hood – a former Family First colleague who joined the Government after the party’s collapse – publicly backed Harvey in a missive sent to electors.

“To suggest there was ‘no party agenda’ or ‘no voting inclination forced upon any member of the Liberal party’ is misleading to say the least,” Day argues in an email titled ‘Dennis Hood defends pro-Abortion MP Richard Harvey’.

“We know members were put under extreme pressure by senior Liberal Party members to vote for this Bill.

“Given the Labor Party’s position, everyone knew this Bill would ultimately pass – the focus of all our efforts therefore was on the amendments, particularly the Speirs ‘Abortion to Birth’ amendment.

“Richard Harvey voted against this amendment, and Dennis Hood knows it.

“For Richard Harvey to write to his constituents calling the passing of the Bill ‘disappointing news’ is as contemptible as it is nauseating.

“It is everything we detest about politics and politicians.”

Harvey did not respond to inquiries today, while Hood told InDaily: “I voted against the abortion Bill.”

“Of course I would have liked to have seen it defeated, but I was happy to support Richard because at the end of the day he voted against the Bill,” he said.

“Only Richard can account for why he voted as he did on the amendments that were proposed, but if a majority had voted against the Bill – as he did – it would have failed, as I’d have liked to have seen.”

Day said he had “written to all the MPs [explaining] how they vote in this will influence how the Australian Family Party goes about preferencing” in their seats.

He said Harvey had been “dissembling” about his vote “so our candidate in Newland will preference against him”.

“At least [moderate-aligned] Paula Leuthen [in neighbouring King] was consistent throughout in supporting the abortion Bill – at least she had the courage of her convictions,” Day said.

“But Richard Harvey, why vote against the Bill when you’ve supported all the objectionable aspects of it?”

He insists the Australian Family Party will become “Family First 2.0”.

“No doubt we’ll be able to get to where we were before,” he said.

“We need to keep them honest – there’s only one thing that works, only one language they listen to and that’s the numbers in the house.”

Liberal Senator Alex Antic told the ABC yesterday he had spearheaded the recruitment drive – known within party circles as ‘Believe In Blue’ – in response to “an extraordinary frustration out there in the community about the trajectory of State Parliament”, which had pursued ‘anti-Life’ social policy including the Abortion legislation and last night’s decisive Voluntary Assisted Dying vote.

Day described a glut of 2018-elected Liberal MPs as “oncers”, saying: “Steven Marshall is going to lose Government over this.”

But Day says the Believe In Blue Pentecostal recruitment drive is misguided as a way of curtailing contentious social policy with which the Christian Right disagrees.

“I get on very well with Alex Antic, and that’s his job -he’s a Liberal, so he’s going to try and recruit [but] the facts speak for themselves… for 16 years, from when [Family First founder] Andrew Evans was first elected in 2002, we were able to keep all that stuff at bay [and] we were successful in every election,” he said.

“It’s a bit like standing on the fulcrum of a child’s seesaw – if one party leans one way, we can… stand in the middle and shift our weight, and have a big influence about who gets elected.

“We said ‘you vote for this and we’ll preference against you, make no mistake about it’ and that was enough to keep them honest.

“But the minute Family First’s not there, they go off the reservation – and look what you’ve got.

“All that social stuff we were able to keep a lid on – they’ve just run riot.

“When they don’t have anyone conservative there, the Greens drag Labor to the Left, and if there’s no-one there the Liberals turn to the Left as well.”