The helicopters are also the first Australian commercially owned and operated Black Hawks and the first to be on the Australian civil aircraft register.

The Black Hawks took to the skies from Aerotech’s Claremont Base near Brukunga in the Adelaide Hills this morning in a demonstration for media and government officials.

Aerotech Managing Director Sam McCabe said the Black Hawk helicopters were fast, reliable, could be deployed rapidly and drop more than 4000 litres of water or retardant per load to contain fires quickly.

He said the pair of helicopters would remain in Australia all year round.

“This responds to a key finding of the recent Bushfires Royal Commission that state and federal governments should develop an Australian sovereign aerial fleet comprising ‘Large Type 1 Helicopters’ such as the Black Hawk,” McCabe said.

“It also overcomes the issue of relying on northern-hemisphere based Type 1 helicopters, which is becoming more problematic as the length of the bushfire season is getting longer in both hemispheres, therefore making it difficult for Australia to access these additional resources from overseas in shoulder periods.”

The Black Hawk helicopter (UH-60) has a ‘belly tank’ that can be refilled with 4000 litres of water from a lake, dam or tank using a special snorkel in about 35 seconds. 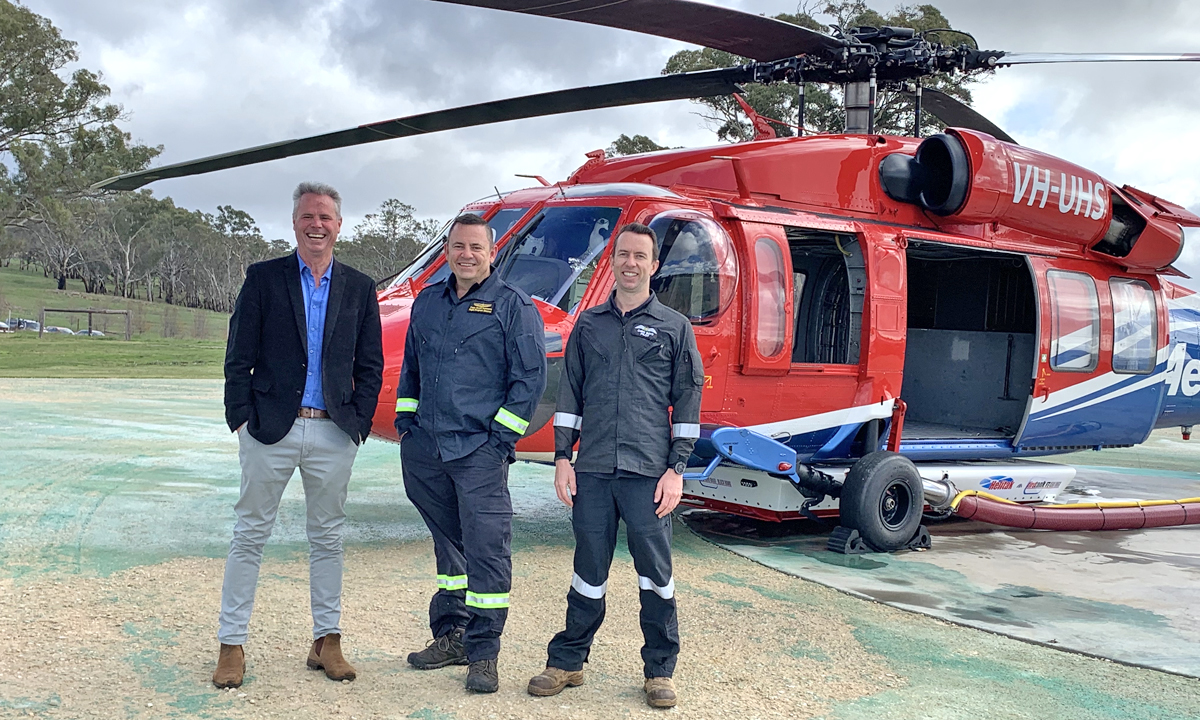 The Sikorsky Aircraft-built helicopter first entered service with the US Army in 1979. The Australian Defence Force also operates about 40 Black Hawks.

They have a maximum total weight of 10 tonnes, a top speed of 360km/h and an overall length of almost 20 metres.

Bob and Pam McCabe started Aerotech in 1968 with a small fixed-wing plane and a handful of contracts to spray crops for local farmers in Tintinara in the state’s South East.

The company moved into aerial firefighting in the 1980s and expanded in 1990 with the launch of its 1st Response team, which still provides specialised aerial firefighting and marine oil spill control services to federal and state government emergency service agencies.

Aerotech also helped pioneer the state’s existing aerial firefighting strategy with the CFS more than 30 years ago, which has since been adopted by fire authorities across Australia.

McCabe, an experienced pilot, took over the reins from his parents with his wife Jessica about 15 years ago and has led the expansion of the company into diverse areas such as aquaculture, lighthouse inspection and executive charter that has allowed it to bolster its core business.

McCabe said Aerotech, which was already responsible for the majority of South Australia’s aerial firefighting efforts, would seek operational contracts across Australia to provide additional capacity in support of existing firefighting aircraft as needed.

He said several Australian businesses would provide services to support the Black Hawks and benefit from their introduction.