Bonaros told the court she responded to being allegedly “whacked” on the bottom by the then-Liberal MP by telling him to “sit the fuck down”.

Waite MP Duluk, who has stepped away from the Liberal party-room as he faces a charge of basic assault, today pleaded not guilty as his long-awaited trial began in the Adelaide Magistrates Court.

The trial could have a significant bearing on the forthcoming state election, with some Liberals keen to see the influential Right-faction MP return to the fold if he is acquitted.

However, he is expected to remain in parliament regardless of the outcome, with the charge of basic assault not understood to meet the threshold to disqualify an MP from remaining in parliament.

Prosecutor Anika Francis told Magistrate Jonathan Wells Bonaros would give evidence that at a parliament house corridor drinks event in December 2019 she was “walking in the corridor towards her office when she was slapped to the bottom by Mr Duluk”.

“She did not consent to being touched by Mr Duluk and that contact was unwelcome,” Francis told the court.

“That incident is the basis of the assault charge.”

However, a witness for the prosecution later gave evidence that appeared to contradict key elements of Bonaros’s account, including the force with which the offending contact was made.

In evidence this morning, Bonaros told the court she had helped organise that year’s annual Christmas event for Upper House crossbenchers and staff, which kicked off around 3pm.

She said Duluk arrived with an entourage of three Liberal staffers around 5.30pm, when there were around 25 people still in attendance.

“He made a very loud entrance into the corridor – he certainly didn’t go unnoticed,” Bonaros said.

“He made comments in general in front of everybody to the effect that there were lefties and commies there – I think that’s what captured my attention at first… he made an entrance.”

Bonaros said she asked Duluk what he was doing at the function, and “he made comments to the effect that we were all sharing the same floor space, so we were all neighbours”.

“My observation of Mr Duluk was that he was intoxicated,” she said.

Bonaros said that during a subsequent game of charades, “at some stage Mr Duluk was trying to remove the jacket” of Dr John Weste, who runs the parliament house library.

She said attendees at the party included Labor MLCs Irene Pnevmatikos and Justin Hanson, with some present joking that the later shared a likeness with Duluk.

“[They were saying] he looked like the Liberal version of Justin Hanson,” Bonaros told the court.

“At that point we’d been taking photos [and] I did take a photo with both Mr Duluk and Mr Hanson… we all thought it was quite funny at the time.”

Asked whether the two in fact looked alike, Bonaros said: “Not really other than the fact they had the same shaved… very short hair.”

“I’m obviously a lot shorter and slighter than both Justin Hanson and Mr Duluk, and when I stood between them I barely reached their shoulders,” she said.

“I made a comment to the effect I was clearly very short in this line-up, and it was at that point that I was lifted up… my recollection is that Mr Duluk hoisted me up so I was as level as possible with him and Mr Hanson.

“I can’t remember precisely where his hands were [but] I tried to grab on to Justin to secure myself from falling.” 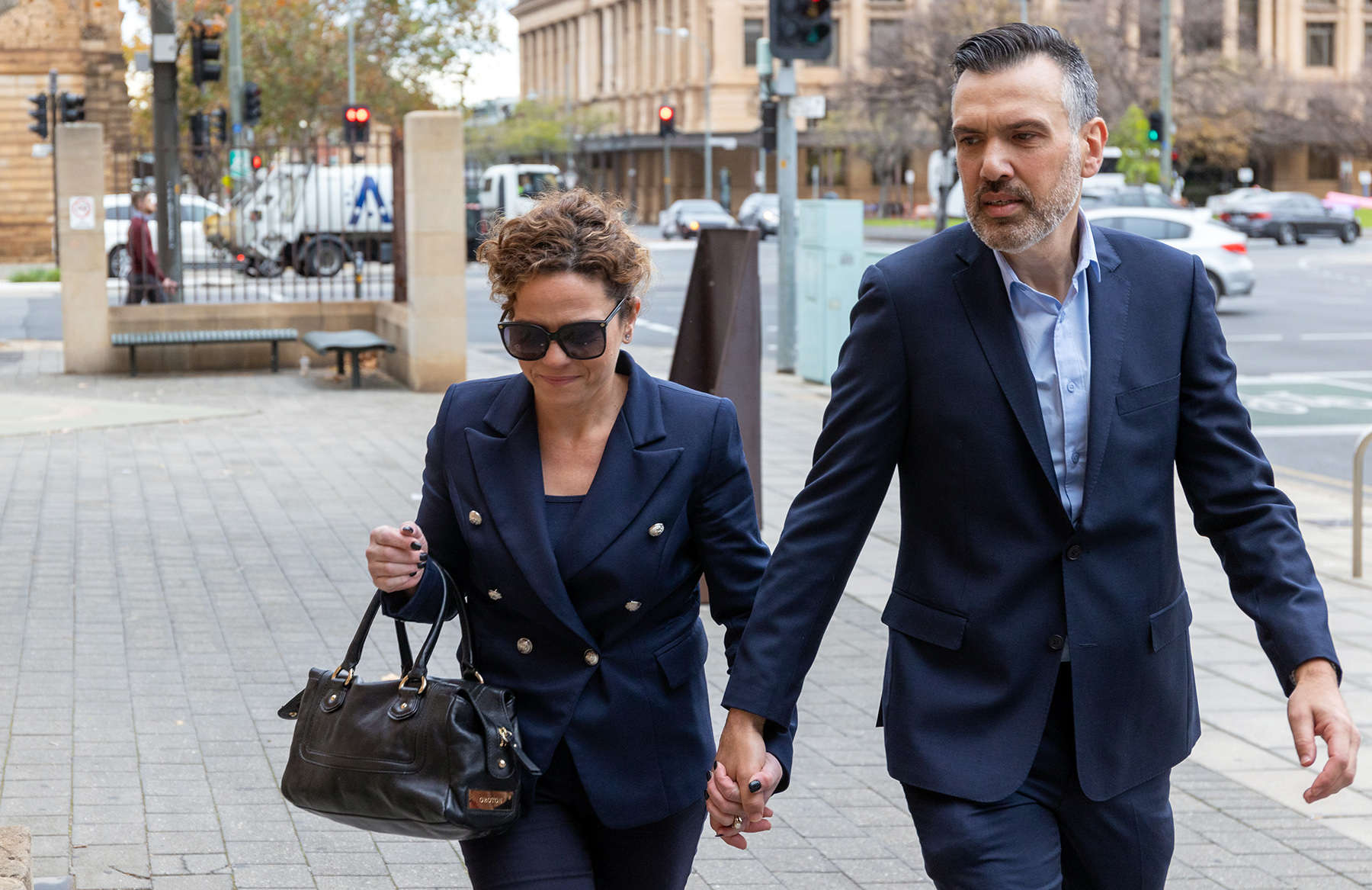 She said she had various interactions with Duluk during the course of the evening, and that at one point the then-Liberal MP went to the bar table, “took a bottle of alcohol and started drinking from the bottle”.

“It was my recollection that it was gin,” she said.

“On one instance he held the bottle up to my mouth and asked me to have a drink.

“I said, ‘I don’t skol from bottles’, and he proceeded to walk away with that bottle.”

She said on another occasion she was seated in a tub chair “talking to the Honourable Tammy Franks” and “out of nowhere Mr Duluk appeared and lifted the chair I was sitting in into the air, which wasn’t welcome”.

“He literally hoisted it into the air… I was wearing a dress that evening, and I was concerned that my dress would creep up,” she said.

“I said words to effect that ‘people can see up my dress, put me down’.”

She alleged Duluk later told her “that he had alcohol in his office and would I like to accompany him to his office, which I declined to do”.

On another occasion “I was talking and socialising with staff members when Mr Duluk approached and proceeded to pour ice down the front of my dress”.

“I discreetly moved away from that conversation,” she said.

However, she later found him sitting behind the desk in her office engaged in conversation with another person.

“I said word to the effect of ‘what the fuck are you doing there’, and he said I had a big office and he’d made himself at home behind my desk,” Bonaros said.

She said she left the room, but that Duluk later approached her and told her he had noticed a funeral card on her desk, with she explained was for her mother.

She said Duluk expressed sympathy and told her he had a similar memento for his late grandmother in his own office, but Bonaros asked him not to discuss her mother’s death.

She said the exchange prompted her to leave for the bathroom in distress.

She further alleged that Duluk later approached her and began dancing with her.

“I was uneasy [and] tried to remove myself,” she told the court.

“People were tidying up, still having a chat… and it was at that point… that Mr Duluk approached – I don’t know from which direction – and proceeded to put his arm around me and whack me on the bottom,” Bonaros said.

“My first instinct was firstly to find my feet and to tell Mr Duluk to ‘sit the fuck down’.

“It felt like I was being swept up with one arm and whacked with the other hand…. it happened very quickly.

“I asked him what he was doing, and I reflected on a conversation I’d had earlier in the night, and said ‘do you think because you’re some Liberal powerbroker you can do whatever you want?’”

Bonaros told the court she was “humiliated, shocked and extremely embarrassed”.

“I was trying to process what had just happened,” she said.

She said Duluk “made some comments back”, at which point she left the room to go to the bathroom and “when I came back I didn’t see him”.

Later, under questioning by Marie Shaw QC, representing Duluk, Bonaros said she had also consumed alcohol throughout the event, including an Aperol Spritz and a couple of pre-mix “New York cocktails”.

She also acknowledged that there was a concurrent Liberal Party function happening elsewhere in the building, and “there were in fact people moving between the two parties”, including Duluk.

Bonaros said she herself attended the Liberal function without an invite at one point, saying “I was welcomed by the Premier when I got there”.

Shaw asked Bonaros whether Duluk had asked her to dance before taking her hands on the dance-floor, to which she said: “That’s my recollection.”

“You agree that he came up to you and asked you to dance?” Shaw asked.

“He didn’t give me an opportunity to do otherwise,” Bonaros responded.

“It probably lasted a few seconds before I moved away from him.”

Late on Tuesday, Emily Bird – who was at the time the office manager for then-Greens MLC Mark Parnell, gave evidence for the prosecution that she had witnessed the alleged contact by Duluk.

“I saw him come out and touch her on the bottom,” she said.

However, she demonstrated the extent of the contact, which Bonaros had insisted “was a whack [that] sounded like a loud smack” – suggesting it was a gentler motion.

She also cast doubt on the stated chronology of events, telling the court the dance-floor interaction had occurred after the alleged “bottom contact”.

She also said that Duluk had earlier “taken some ice and thrown it” rather than pouring it down Bonaros’s dress.

“I noticed Connie had moved out of the way so he wasn’t able to put any down the front of her dress.”