The Whittlesea cluster in Melbourne’s northern suburbs, which began when a traveller returned to Melbourne after contracting COVID while in quarantine at the Playford on North Terrace, has now grown to 26 confirmed cases after Victoria Health reported another 11 cases this morning.

Acting Victorian Premier James Merlino today announced the whole state of Victoria would enter a seven-day lockdown from midnight Thursday, as contact tracers try to get on top of the “highly infectious” Indian variant of the virus.

“Our public health team’s primary concern is just how fast this variant is moving,” Merlino said.

“Unless something drastic happens, this will become uncontrollable.”

People in Victoria will only be able to leave home to shop for food and essential items, provide or receive care, exercise, work or study if they can’t from home, and receive a COVID vaccine.

More than 10,000 primary and secondary contacts in Victoria are now isolating, with the state’s health department conducting 40,411 tests on Wednesday – a new daily record.

There are 124 people in South Australia who have been identified as “close contacts” of positive cases in Victoria and who are currently in quarantine.

Of those, 104 those have already returned negative day one test results.

There are now more than 150 exposure sites across the state of Victoria listed on the State Government’s website, including the MCG and Marvel Stadium.

SA Health has sent 50,000 text messages to people in South Australia who have recently visited Melbourne asking them whether they visited any of the exposure sites.

Of those, 30,000 are yet to fill in the survey, with chief public health officer Professor Nicola Spurrier this afternoon urging them to do so “as soon as possible”.

An influx of travellers into South Australia from Victoria before the state’s border shut to Greater Melbourne on Wednesday has prompted a testing surge at Adelaide’s main drive through testing facility at Victoria Park.

SA Pathology closed the facility to new arrivals around 10pm on Wednesday after determining they would not be able to test everyone before the site was scheduled to close at midnight.

The facility was again temporarily closed to new arrivals this morning as authorities tried to manage traffic in the area, with cars queued hundreds of metres east and stretching back to the Britannia Roundabout.

Spurrier said the Victoria Park testing clinic had a wait time of about three hours this afternoon, while the Hampstead facility had a one hour wait time.

SA Police advised motorists this morning to avoid Wakefield Road in Adelaide, Hampstead Road in Lightsview and Daws Road in Daw Park due to “large traffic delays” associated with drive through testing sites nearby. 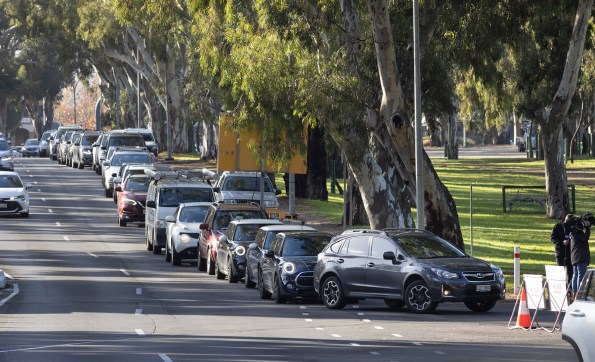 The queue for COVID-testing at Victoria Park stretched back to the Britannia roundabout. (Photo: Tony Lewis/InDaily)

Spurrier said the Federal Government had agreed to open GP respiratory testing clinics this afternoon for people who are not symptomatic, but who require tests.

SA Pathology conducted about 7500 COVID-19 tests on Wednesday – one of the highest days in the state since the start of the pandemic.

3 hour wait for #COVID19 test at Repat from Winston Ave, Daw Pk. Queue goes all the way to South Road. This is the 6 second version from @BigRedCar3 #Adelaide @DavidBevanSA pic.twitter.com/8g4QObYyKV

More than 450 Port Adelaide fans who returned home to SA were told to get tested and isolate after they attended the Collingwood vs Port Adelaide match at the MCG on Sunday, which is now an exposure site.

Two Port fans who were deemed “close contacts” of the positive case have since tested negative, Spurrier confirmed this morning.

“[That] was very reassuring because those two people had time in our community,” Spurrier told ABC Radio this morning, noting they were now completing 14 days of quarantine at home.

All Port Adelaide players and staff who travelled to Melbourne for the game have also recorded negative test results this morning, with players returning to normal training today ahead of their scheduled match with Fremantle on Sunday at the Adelaide Oval.

South Australia is yet to extend its border closure with Greater Melbourne to the whole of Victoria, with Spurrier telling reporters this afternoon that she would meet with the state’s emergency coordinator and Police Commissioner Grant Stevens to discuss whether there is a need to change the border direction.

“I think it is worth just people realising that once Victoria enacts a stay at home order that does actually provide more comfort for us here in South Australia regardless of our own lockdown,” she said.

“When we’ve had border restrictions that include the whole of Victoria, it is very, very, very impactful on our border communities and we really need to think through how we manage that best.”

Police Commissioner Grant Stevens said the current border restrictions, which allow regional Victorians to travel into South Australia, would “probably be sufficient even if [Victoria] go into lockdown”.

“At this point in time I don’t anticipate any changes in the next 24 to 48 hours, but we do monitor on a continual basis,” he told ABC Radio today.

Police say they have set up eight road checkpoints along the SA-Vic border and are “currently experiencing an increase in the volume of traffic”.

“Therefore, motorists at some of these locations are experiencing minor delays with the processing of travellers on the Cross Border Travel Registration Platform,” SAPOL said in a statement.

Police also urged those trying to cross the border to fill out a separate cross border travel form for every member of the travelling party, have their Approved Traveller Number “immediately available” at the checkpoint, exercise caution and “ensure you understand the nature and level of restrictions or conditions that will apply to you”.

The call for caution comes after a 47-year-old South Australian truck driver died in a fiery crash in February when he collided with two other trucks stuck in a long queue waiting to enter South Australia.

The queue to enter SA, which stretched for several kilometres, followed the announcement of snap travel restrictions for residents of Greater Melbourne who were set to enter a three-day circuit breaker lockdown in Feburary.

Meanwhile, Spurrier said the demand for vaccinations in South Australia was “very strong” in light of the Melbourne outbreak.

She said the Government had decided to keep the vaccination clinic at the Wayville Showgrounds open while the Royal Adelaide Show takes place from September 4 to 12.

A select number of vaccination bookings will be left open for show-goers to get vaccinated while they are at the event.

As of this afternoon, there were about 1500 vaccination appointments available at the Wayville testing clinic for next week.

Adelaide’s scheduled match against Richmond at the MCG on Sunday has been moved to Sydney as the AFL scrambles to deal with the implications of the Victorian lockdown.

With Sydney due to play Carlton at the SCG on Sunday, Giants Stadium looms as the likely option for the relocated match between Richmond and Adelaide.

The Crows were previously seeking an exemption from SA Health to travel to Victoria for the match.

The Tigers will fly out of Melbourne on Thursday afternoon and are preparing to be away for an extended period, as they were during last year’s premiership-winning season in Queensland.

“The collective view from our club is we quite enjoyed being away together (in 2020) and we were focused on the job at hand,” Tigers assistant coach Adam Kingsley told SEN SA.

“It will pose some challenges to a lot of guys, myself included, but that’s unfortunately the industry we’re in at the moment.

“We need to take some extreme measures to try and protect it. One of these looks like it could be leaning towards a hub.”

More than 40,000 people were expected to attend Friday night’s top-of-the-table clash between the Western Bulldogs and Melbourne, but the game is in doubt after Demons players and staff were ordered into self-isolation this morning.

As reported by the ABC, the isolation order was issued after a Demons player attended one of the exposure sites listed by the Victorian Government.

It means all Melbourne players and staff will have to return a negative test before Friday night if the game is to go ahead as scheduled.

Gold Coast’s clash with Hawthorn in Darwin on Saturday night has already been postponed but that is unlikely to be the last of the fixture changes.

Essendon are already in Perth for Saturday night’s clash with West Coast at Optus Stadium and could remain there for a match against the Tigers in round 12.

The Blues also made it out of Melbourne on Wednesday and are currently in Sydney gearing up to face the Swans.

On Wednesday, strict restrictions were imposed on all Victorian-based AFL clubs, with players and staffers recommended to only leave their homes for playing, training and essentials.