The Victorian Department of Health announced last night that a positive case was seated in Zone 4, Level 1 of the MCG’s Great Southern Stand at the Collingwood vs Port Adelaide match on Sunday.

Victoria Health said anyone who was seated between Bay M1 and M16 would be contacted directly by authorities, with some individuals who were seated closer to the person to be provided specific advice by the Department while authorities continue to monitor CCTV footage of the crowd.

Port Adelaide’s cheer squad was sitting in Bay M3 where “close to 2000” supporters were located, according to Power fan Celine Palmer who attended the game.

The AFL said in a statement this morning that all patrons in the affected bays “have been contacted overnight and asked to immediately get tested and isolate”.

“It appears that this will affect everyone who was sitting in our Cheer Squad bay,” Borland said.

“Whilst text messages have been sent out overnight, some people still haven’t received them and are possibly still in the dark.

“We urge anyone that was at the game to please take the advice of Vic Health or SA Health, and go get tested and self-isolate!”

Borland also asked those affected not to attend the cheer squad’s banner session on Friday night and “if in doubt, please don’t attend the game on Sunday”.

“I understand that this may be scary and stressful but if we all do the right thing, this will be taken care of swiftly and properly.”

The Power are scheduled to face Fremantle at Adelaide Oval on Sunday afternoon. 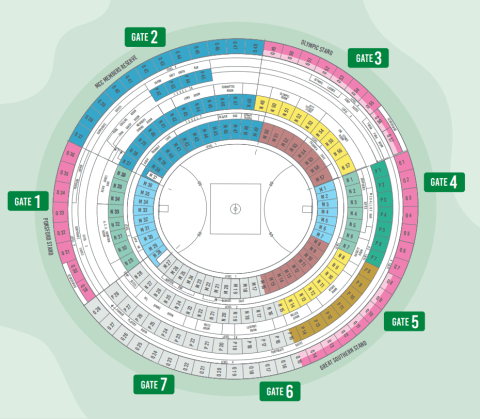 Anyone seated from Bay M1 to M16 at the Collingwood-Port Adelaide match on Sunday will be contacted by Victoria Health (Photo: MCG).

The club announced this morning that all of its players and staff who travelled to the MCG would undergo COVID tests and isolate today.

“The club is also encouraging any members and supporters who attended the match to get tested out of an abundance of caution,” the club said in a statement.

“Wednesday had already been a scheduled day off for players and football department staff, who will await negative results before returning to training.”

Cheer squad member Celine Palmer, who on Monday arrived back in Adelaide on a “completely full” flight, said she was now isolating after submitting for a COVID test early on Wednesday morning.

She said she did not receive a text alert from Victoria Health because her ticket was bought by a friend interstate, but this information was later passed on to her.

“Luckily I didn’t go to the bathroom at the G … I went and got some soft drinks before the game started, so hopefully [the positive case] wasn’t in there,” Palmer said.

“There was no need for masks like Adelaide [where you] have to wear [them] in and out.

“It’s like you sit here and you think ‘thank God Adelaide is actually proactive in getting it all done’.”

Chief Public Health Officer Nicola Spurrier this morning said Victoria Health was contact tracing cases at the MCG and sharing information with SA Health, which will send out text alerts.

“However, if you have been to the football and you haven’t heard from anybody yet, what I would suggest you do is that you watch very closely for symptoms,” Spurrier told ABC Radio.

“And even if you haven’t got symptoms, it would not do any harm to go and get a test.”

Long lines and waits of up to three hours have been reported at several Adelaide testing sites today.

It comes after South Australian authorities moved overnight to further tighten its border restrictions with Victoria.

Entry into SA is no longer permitted to anyone who has been in the City of Whittlesea in the last 14 days, in addition to those who have been at a “tier one” or “tier two” exposure sites in Melbourne – of which there are now 50 listed on the Victorian Government’s website.

All arrivals from Greater Melbourne into South Australia also now must submit to tests on day one, five and 13 of their stay, and isolate until they receive their first negative test.

Queensland, Western Australia and the Northern Territory have also tightened restrictions for people travelling from Victoria but stopped short of closing their borders.

The Victorian government has warned the next 24 hours will be critical as health authorities try to contain the outbreak and consider further restrictions.

“I cannot rule out taking some further action, but we will update people as soon as we know,” Acting Premier James Merlino said.

“It’s fair to say the 24 hours are going to be particularly critical.

“It’s good that [every case] is linked at this stage, but we are concerned about the number and also about the kind of exposure sites.”

Earlier on Wednesday, the health department announced an extra five infections taking the total number to 14 from nine on Tuesday evening.

But one more case was revealed just before Merlino gave a briefing on the outbreak this morning, expanding the Whittlesea cluster to 15.

Five of the new cases are workplace contacts and all the cases are the Indian variant of the virus.

Genomic sequencing shows the outbreak is linked to the case of a Wollert man, who contracted the virus in Adelaide’s Playford medi-hotel earlier this month.

SA Health is due to release a report on the incident today.

The man, in his 60s, could be the possible “source case” for the City of Whittlesea outbreak, although a definitive link is yet to be established.

Meanwhile, the number of exposure sites around Melbourne has grown from 10 on Tuesday to 50 on Wednesday morning, including the MCG.

In response to the outbreak, home gatherings are now limited to five visitors a day and public gatherings restricted to 30 people until at least June 4.

Masks are mandatory indoors for people 12 and over, but can be taken off for eating, drinking and exercise.