The hospital has already apologised to Annabelle and Dave Oates, who lodged a complaint after their 7-year-old daughter Audrey waited 8.5 hours for surgery – only to have her appendix burst in the meantime.

The hospital launched an internal investigation after the incident on March 1 and Audrey’s parents say they were told that would take 35 days.

Nearly three months later, they are still waiting for an outcome, describing the lack of information as “frustrating”.

The hospital has told them the investigation has now formed part of a “broader review” which is underway.

In a letter to the parents, seen by InDaily, the hospital’s nursing service director tells them the broader review “aims to identify issues which may have contributed to Audrey’s care and prevent reoccurrence”.

Dave Oates has told InDaily the family has had to do most of the chasing for any communication from the hospital and he and his wife had expected to have answers by now.

“It’s frustrating for us, basically,” he said.

“We just want some answers. We want them to come back and say, ‘We’ve done this investigation, this is what’s happened and we’re going to work to try and make it better in the future’.”

Audrey’s parents spoke out about their daughter’s case in April, in the hope of preventing a “tragedy” for another family.

They explained that they had taken Audrey to the emergency department for urgent treatment after their GP diagnosed her with acute appendicitis, but they say she wasn’t examined by a doctor for six hours and didn’t have surgery until 8.5 hours after their arrival.

Her appendix burst while waiting, leaving her in agony.

At the time, the doctors’ union said the case was symptomatic of a system at breaking point and it came after frontline medicos told a parliamentary committee that resources at the Women’s and Children’s Hospital were “so thin on the ground now that we are seeing errors”; doctors’ incident safety reports were being downgraded and staff had serious reservations about planning for the new hospital.

The family contacted the hospital a few weeks ago to find out what had happened to the investigation.

“A nurse rang us from the emergency department and didn’t really tell us anything,” Dave Oates said.

“I think they were looking deeper into the operating procedures from what she was saying.

“We’re not holding our breath basically.”

He said he was surprised the hospital hadn’t sought more information from them.

“Apart from the (complaint) email that we’ve sent them, nobody’s actually talked to us about what happened that night,” he said.

“There’s been no our side of the story apart from the one email we sent.

“I just want what we’ve always wanted – we just don’t want this to ever happen again to anyone else.

Dave Oates said Audrey’s health was going OK but the mental scars from the ordeal remained.

“It went from what should have been quite an easy operation – in maybe overnight and out the next day, to 10 days in hospital, IVs and all that kind of thing,” he said.

“I’d like to hear that there’s actually been something put into place so that the processes are better in the hospital.

“I know it’s a tough situation when they’re so overworked… but at least some kind of way they can make the triage better so you’re not sitting there watching some child who looks like they’ve twisted an ankle going in ahead of a child who’s basically got a life-threatening situation if they don’t deal with it straight away.

“I don’t hold the doctors and nurses who were there that night responsible. It was just a bad situation that should have been dealt with better with better processes.”

In a statement, a spokesperson for the Women’s and Children’s Hospital said “following the initial review into the circumstances surrounding the care of the child, the decision was made to undertake a more detailed investigation”. 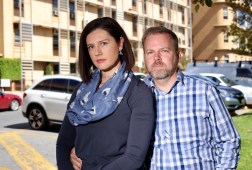 “This will further examine the incident and provide recommendations on actions to prevent or minimise a recurrence of a similar incident,” the spokesperson said.

“This thorough investigation will take a number of weeks to complete and once concluded, the recommended changes or improvements will be made public.”