The club confirmed late today it will still be able to wear its intended guernsey design in its Round 11 Sir Doug Nicholls Round clash, with the blessing of the original artist – who overnight sensationally claimed ownership of the artwork.

The Power chose the design for its Sir Doug Nicholls Round jumper – intended to be worn next week against the Dockers – from a shortlist of guernseys originally created by students for their school teams participating in last year’s Santos Aboriginal Power Cup carnival.

The Cup was cancelled due to 2020’s Parafield COVID cluster, with Port keen to showcase one of the unused works – and settling on a design created by a female South Australian high school student.

However Elle Campbell, a vet nurse and emerging Aboriginal artist, took to Instagram last night to claim, in a series of posts, that the artwork was hers.

“Wow. This is MY painting, someone has submitted it as their own and PAFC are using it for their guernsey,” she wrote in one post.

In another, she highlighted a hoodie being sold via the club’s online Port Store, writing: “Not just similarities, it’s my exact painting.” 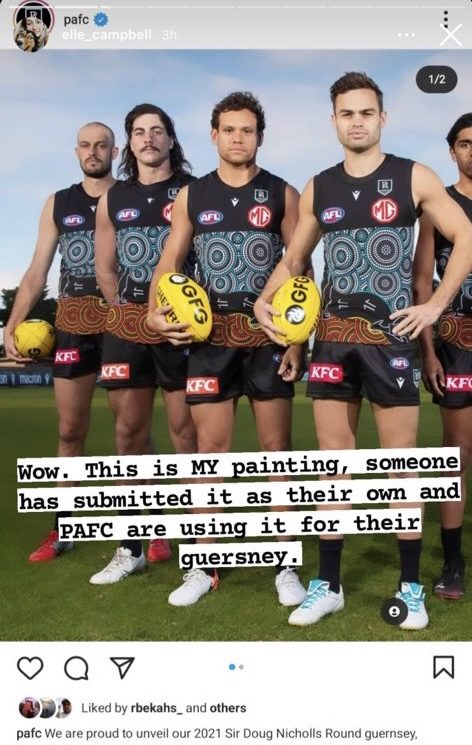 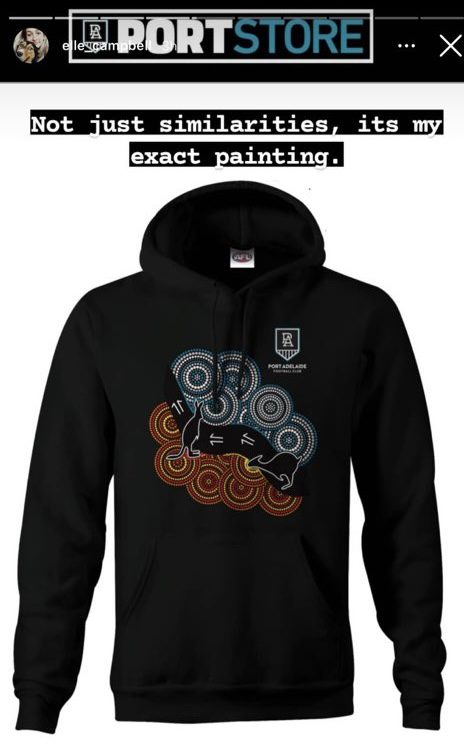 She displayed an old post from almost two years ago in which the artwork was displayed in an exhibition at Flinders Medical Centre.

“I am deeply hurt by the use of this painting and the ‘artist’ claiming this work to [sic] be their own,” Campbell continued.

“The meaning behind this painting was of my families’ ancestral burial ground at Kingston SE and the connection we still have with the native flora and fauna on those lands.

“My mother had sent me a photo of some kangaroos coming out from the scrub to go have a dip in the water, which was the inspiration for this painting.” 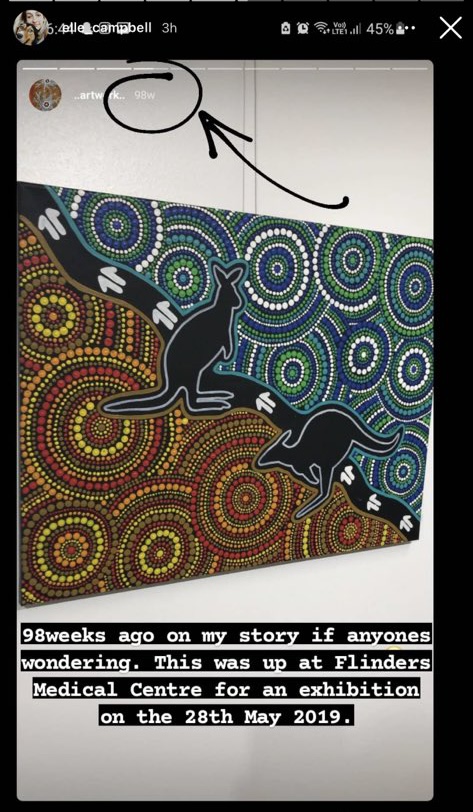 She said she was “feeling pretty heartbroken” about use of the artwork “that not only means so much to me but it was also one of my first paintings”.

The club only became aware of the claims when it was tagged in social media posts late last night, initially issuing a brief statement that it was “aware of commentary regarding the design of its Indigenous Guernsey” and was “investigating the matter”.

It briefly withdrew all merchandise bearing the design from sale pending its investigation, but in a statement late Friday afternoon, the club confirmed it had now “connected with all relevant parties in response to social media commentary relating to the club’s Indigenous guernsey for Sir Doug Nicholls Round”.

“Port Adelaide can now confirm the artwork on the guernsey was originally designed by Aboriginal artist Elle Campbell for a 2019 exhibition at Flinders Medical Centre to celebrate NAIDOC week,” a statement said.

“The club met with Ms Campbell this morning who stressed that she wanted the club to wear the design as part of the upcoming Sir Doug Nicholls Round.”

In the club statement, Campbell was quoted as saying that “Sir Doug Nicholls Round is important to me and my people and I know it means a lot to Port Adelaide”.

“I don’t want to take anything away from the club or the Indigenous players representing the club,” she said.

“I definitely want Port Adelaide to wear the guernsey with great pride in Sir Doug Nicholls Round.”

She said she had now been in touch with the student, and stressed that “I don’t want people to hassle” her.

“She’s young, she’s made a mistake and owned it, and I know what social media culture can be like,” said Campbell. 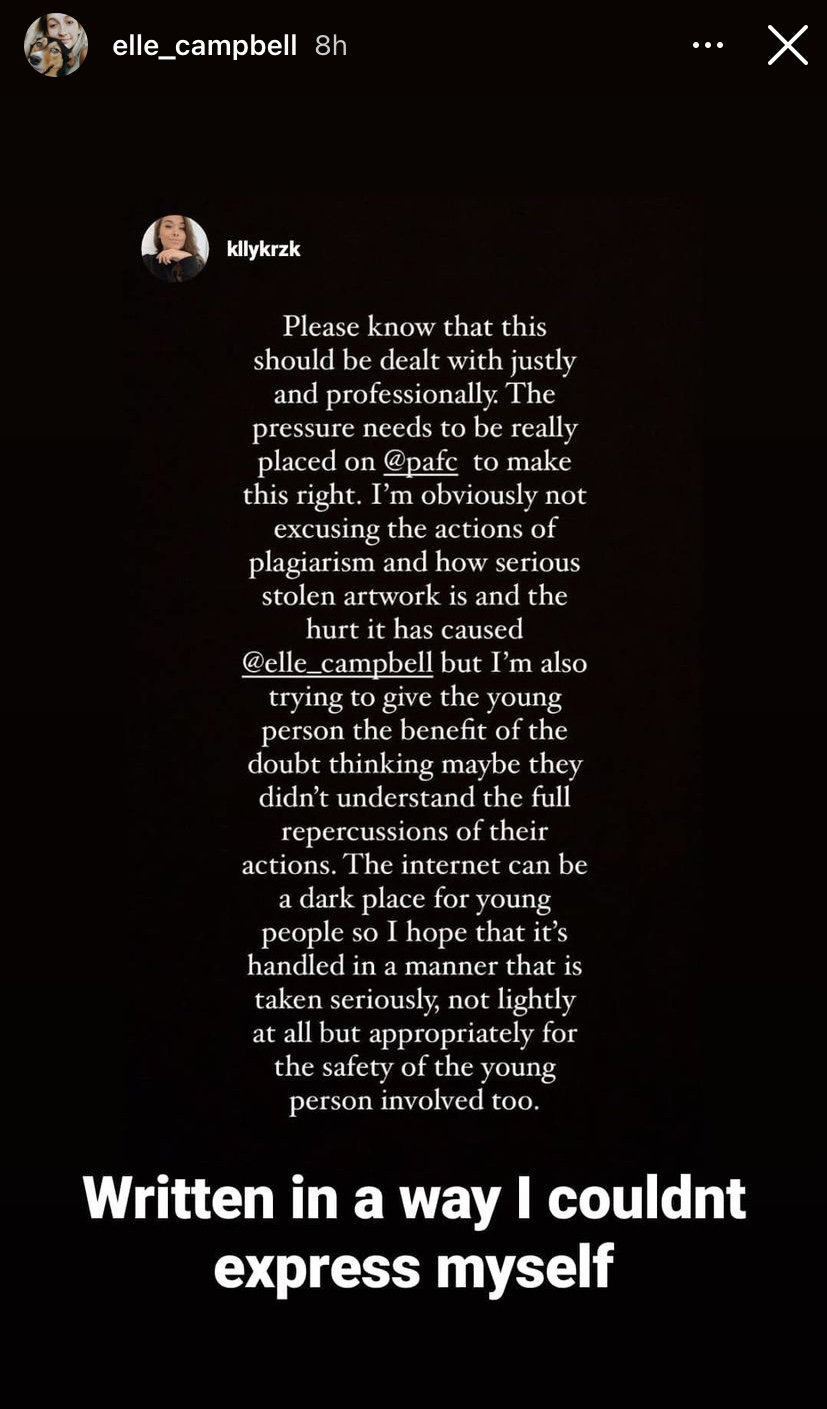 “The way the Port Adelaide Football Club has handled this has been great. I’m happy that I will receive the recognition as the original artist and that my story behind the artwork can be told,” she said.

Campbell said proceeds from merchandise sales bearing the design should be invested into the club’s Aboriginal programs, saying: “I’m more than happy for all the guernsey sales to be invested back into these programs to ensure Indigenous youth continue to get opportunities to grow.”

Port Adelaide chief executive Matthew Richardson said: “Clearly, no one intended for this to play out this way, but we are now pleased that Ms Campbell will get the recognition she deserves and we look forward to telling the story behind her artwork next week.”

“Ms Campbell has been outstanding throughout this whole process and we thank her for her understanding,” he said.

“It’s a mark of her character that one of her first concerns was the welfare of the student.

“We have provided support resources for the student and her family and will continue to support her moving forward. She made a mistake and acknowledged it, so now we ask others to respect her privacy.”

The student had been showcased by the club earlier in the week, explaining the meaning of the work and the creative process.

“The teachers told us to bring the painting towards my family and stuff, and just make it really personal… so I thought really hard about it and it took my almost two months to finish the painting, and just really express how it relates to the river, and to my hometown and my family, myself.”

She said she was “so excited” when her design was chosen for Sir Doug Nicholls Round, adding: “Knowing that it’s going to be worn in the Power game has made me and my family really happy.”

“This is a big accomplishment – I feel proud to see that that’s my artwork and it’s been recognised.”

During a midweek media conference, she was asked where she got the inspiration for the artwork, and said: “I got it on Instagram, I was just like inspired by other people and just… had to paint.”

Inquiries to the high school this morning were referred to the Education Department, which said: “We are aware of Port Adelaide’s investigation in relation to the Indigenous round guernsey.

“The school has been in touch with the girl’s family and the priority for the leadership team is supporting her wellbeing,” a spokesperson said.