Speaking at a Business SA breakfast this morning, Frydenberg said that the Federal Government had made an assumption that Australia would start welcoming back international students from the end of this year, subject to discussions between the state governments and universities about quarantine arrangements.

Asked by University of Adelaide Pro Vice Chancellor Professor Noel Lindsay whether Australia should be “ignoring China (and) taking them out of our equation” following worsening trade and diplomatic disputes, Frydenberg said that he hoped that Chinese students would be welcomed back.

“Certainly our intent is to support the international student sector by enabling these cohorts to arrive,” he said.

“From Australia’s perspective, we’ll continue to be clear and consistent with respect to our national interest, whether that’s in relation to issues on investment, human rights, international security.

“I feel like it is an important time for Australia and we have to be wary of the changes in the global strategic environment and we need to be clear and consistent on those issues, which is what we’re seeking to do.”

It comes after relations between Canberra and Beijing plummeted last year after Australia called for an international investigation into the origins of the COVID-19 pandemic and introduced foreign interference laws.

Frydenberg said it was “no secret” that the China-Australia relationship had been “challenging”, but the economic relationship between the two countries remained “mutually beneficial”.

“Some of our agricultural produces have been impacted by China’s actions, but the economic partnership remains our largest two-way trade relationship (and) it remains very important,” he said.

“Our largest export to China is obviously iron-ore.

“The Chinese can’t replicate the quality or the quantity of the iron-ore that we supply from other countries.

“China’s also the world’s largest steel exporter, so they do need our iron-ore to create tens and thousands of jobs in their own country.”

International education is a $2 billion industry in South Australia.

A Centre for Independent Studies 2019 report found Chinese students accounted for about a half of international students at the University of Adelaide.

Adelaide Uni board member Christine Locher told Frydenberg that education was among the top three exports in South Australia and repatriation of international students was “critical”.

She said there was still uncertainty about whether international students could return this year and there was “nothing in the (Federal) Budget” to support universities while they suffered losses. 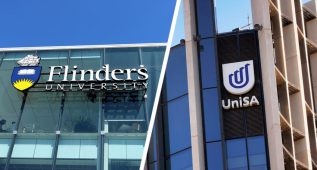 InDaily reported last week that a federal government decision not to renew $1 billion in research funding had put more pressure on South Australia’s higher education industry as the sector braces for a budget cut of nearly 10 per cent over the next four years.

Frydenberg responded saying the government had budgeted $19 million for universities and had “guaranteed all their domestic enrolments”.