The Lower Mitcham teen began his journey from curious kid to emerging inventor about four years ago when he began attending electronics workshops at the STEMSEL club in the Adelaide CBD.

Josh, 14, is passionate about programming and electronics and is studying Year 10 at Glenunga International High after jumping from Year 8 in 2020.

“I undertook an online engineering course recently and I made some things from that,” he says.

“My idea was a pair of pizza tongs that could grip the pizza and allow you to eat it without getting your hands greasy, which is pretty dumb.”

But his creative contraptions don’t end there.

“On the weekends I sleep in too much so I am creating a bed-mounted arm with a spray bottle on the end that has a motor attached to it,” Josh explains.

“An ultrasonic sensor is at the end of the bed and if it detects that the distance from the end of my bed to the front of my bed is as it should be then it doesn’t spray. But if it detects you are still in bed it sprays you with water.” 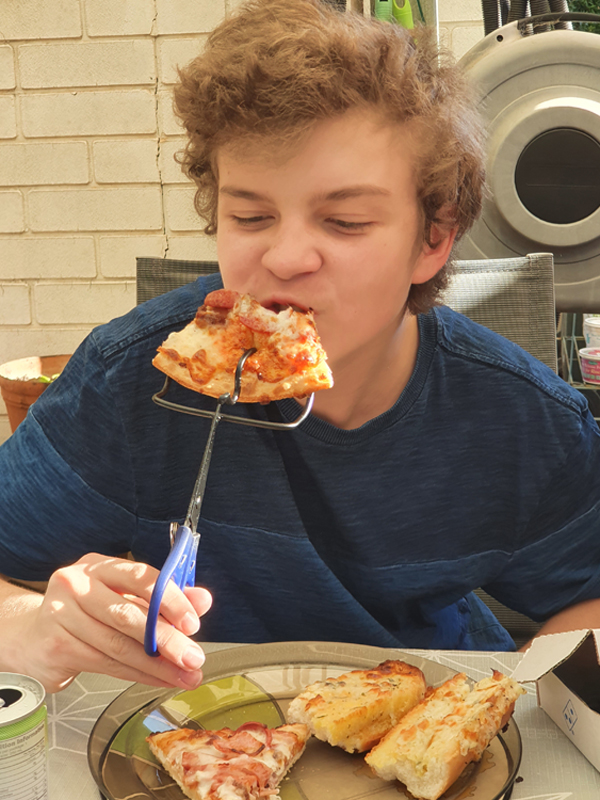 Through the Peel Street-based STEMSEL Club, which is an acronym for Science Technology Engineering Maths Social Enterprise Learning, Josh is helping teach programming and electronics to other students in Adelaide and via zoom sessions with students in Cameroon, Malaysia and Nepal.

The prize included a trip to the 2020 International Invention, Innovation and Technology Exhibition (ITEX) in Malaysia and although Josh could not attend in person due to the coronavirus pandemic, he sent a six-minute video demonstrating his invention and took out the Asian Young Inventors Best Invention Award last November.

It is the second time in recent years  a STEMSEL student has won a major prize at the Malaysian competition. Max Weir also won the Secondary Level section of the competition after inventing an automated compost bin monitoring system in 2019.

Josh is also a talented mathematician.

“I have always enjoyed programming and electronics and I play a lot of video games in my spare time,” he says with a cheeky grin.

“I’m not sure whether it’s about inventing new things – all ideas have been thought of before – but I’m just making ideas into reality.”

Entries for this year’s Technology & Stem Inspired Competition at the Royal Adelaide Show open on Friday (May 21) and STEMSEL is encouraging young inventors to enter.

Planning is well underway for this year’s show, which will return to the Adelaide events calendar from September 4-12 after a year off due to the coronavirus pandemic in 2020.

Competition categories have now started to open, with many of the 60 sections now officially accepting online entries.

“2020 saw many of us spending more time at home, which for some meant the opportunity develop hobbies and passions such as cooking, art and craft and gardening,” she said.

“We’re anticipating that these renewed interests will flow into the show’s competitive sections.

“Entering one of the show’s competitive sections is a great way to be a part of the show.”