In a memorandum sent to all Courts Administration Authority staff this morning, seen by InDaily, Chief Justice Chris Kourakis, Chief Judge Michael Evans and Chief Magistrate Mary-Louise Hribal wrote that responding to “bad behaviour” should not be the sole responsibility of victims and that eliminating harassment was “everybody’s responsibility”.

The judges said they were in the process of reviewing their internal complaint handling processes and called on staff to offer feedback to make sure “perpetrators are held accountable”.

She alleged several judicial officers were witness to the harassment, but despite her attempts to raise a complaint, no action was taken.

The allegations prompted Kourakis to launch a separate investigation into why Bitmead’s allegations were not brought to his attention in 2018, while Hribal on Wednesday ordered the magistrate to stand down from the bench during Vanstone’s inquiry.

In their message to court staff, Kourakis, Evans and Hribal wrote that reporting misconduct was “not disloyalty”.

“It is the person impacted by the bad behaviour who deserves your support,” they wrote.

“On some occasions, you may be confident and comfortable enough to call out harassment on the spot.

“Perpetrators will often back off quickly when challenged”.

The judges went on to state that they gave “permission to all CAA staff who have experienced bullying and harassment to speak up”.

They said that the Courts Administration Authority had already developed protocols for reporting and dealing with misconduct, but they wanted to hear from all staff on how the courts could become “an example of best practice in workplace culture”.

“We invite all judicial officers and administrative staff to join with us in a concerted effort to make real and lasting change which ensures that all our workplaces are supportive and respectful,” they wrote.

“Our internal complaint handling and resolution mechanisms must be easily accessible and meet the needs and expectations of informants.

They wrote that judges and magistrates “can be influential by leading by example” and their power “does not extend to making of unreasonable or arbitrary demands of, or concerning, CAA staff”. 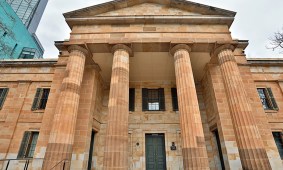 Magistrate under harassment investigation barred from sitting in court

“Differences or concerns arising out of the working relationship between judicial officers and staff must be resolved fairly, reasonably and consistently with our responsibility for the proper administration of justice,” the judges wrote.

A recent damning review into the SA legal profession, published by the Equal Opportunity Commission, found that 42 per cent of the 600 legal practitioners who responded to a survey reported experiencing sexual or discriminatory harassment at work.

Just under 13 per cent of those said the behaviour was perpetrated by “very powerful” former members of the state’s judiciary.

A “worrying” 10 per cent of respondents also experienced sexual harassment during court proceedings.

According to the Commission’s report, “more often than not” the alleged perpetrators targeted women who were “very junior members of the profession or administrative staff”.