The Bill, introduced by Labor MLC Kyam Maher, passed the Upper House last night, with Premier Steven Marshall this morning declaring the House of Assembly would move “swiftly and decisively” to debate the legislation.

The previous, 16th attempt to introduce euthanasia laws in 2016 ended with a 23-all stalemate in the Lower House, with then-Speaker and Labor Right-winger Michael Atkinson killing off the Bill with his casting vote.

However, several of the MPs who voted on that Bill – including its author, then-Liberal MP Duncan McFetridge – are no longer in parliament.

Of the 24 who voted against the Bill in 2016, 11 have since retired or lost their seat – with at least four of their successors expected to vote in favour of the new legislation.

Moreover, at least one MP who voted against McFetridge’s Bill intends to vote a different way this time, with others considering changing their stance in light of what Liberal frontbencher John Gardner today called “the most conservative euthanasia Bill ever presented to the parliament”.

Crossbench Mount Gambier MP Troy Bell – a former Liberal – told InDaily despite voting No in 2016, “I’m comfortable with this Bill”.

He said similar legislation had been in operation for almost two years in Victoria, which has “given me plenty of time to talk to people over there on it”.

“I was very close on the last Bill,” he said.

“The defining moment for me was when an uncle of mine – a deeply religious man – died of cancer in a pretty agonising way.

“I spent a lot of time with him in his final days, and what he said still sticks in my mind – ‘If you think living’s hard, wait till you have to die with cancer, this is far harder’… if he had the option [for euthanasia] I think he would have taken it, even though he was extremely religious.

“So it’s probably a combination of things, as well as reflecting the overwhelming sentiment within my community.”

Bell said he believed the Bill “will probably get through”.

Gardner, a Liberal moderate who also voted No in 2016, told InDaily he was similarly considering changing his vote.

“I’m pretty conservative on this issue, but I haven’t seen a Bill come to the House as conservative as this current one is, so I’ll have a look at it in more detail and take soundings from my electorate before I make a final decision,” he said.

“I wasn’t satisfied the last Bill had anything like what was necessary, but this is the most conservative euthanasia Bill ever presented to the parliament.”

That’s evident in the significant fact that two Liberal right-wingers and first-term MPs, Steve Murray and Dan Cregan, are yet to publicly declare their position.

“I’m considering my position and welcome constituents being in contact with my office to let me know their views,” Cregan said today.

Current crossbencher Fraser Ellis – another Right-winger who stood aside from the Liberal Party to contest charges of misuse of parliamentary allowances – is widely expected to vote in favour of the Bill, although he is yet to declare as much.

“My position is always to reflect the will of my constituency,” he told InDaily today.

“At the time it comes before the House I’ll make an assessment of what they expect from me.”

Significantly, however, he yesterday tabled a petition of 700 signatures from constituents in favour of voluntary assisted dying.

Several former Liberal MPs have been replaced by factional moderates, such as Finniss MP David Basham, who told InDaily: “I am prepared to support Voluntary Assisted Dying legislation provided it has sufficient protection for the people who need it.”

His factional colleague Paula Luethen did not respond to inquiries today, but in an earlier interview with the Australian Christian Lobby when she was a Tea Tree Gully councillor, she said: “This is a complex area of law and I would need to see the detail of any proposed legislative change before finalising my position.”

Former MacKillop MP and deputy Liberal leader Mitch Williams, who voted against euthanasia in 2016, has been succeeded by first-term MP Nick McBride, who is “very much supportive” of the new Bill.

“I don’t think it goes far enough,” he said.

“I’ve taken a great deal of compromise – all I want to see is this Bill pass our parliament.”

Former Labor MP Jennifer Rankine opposed the 2016 Bill, but her successor Blair Boyer said he would vote in favour of Maher’s legislation.

Only six MPs who voted in favour of the McFetridge Bill have since left parliament, with most of their successors expected to similarly back the current Bill.

Labor’s Jayne Stinson, who replaced long-time euthanasia campaigner Steph Key in Badcoe – said: “In recent months I’ve sat down at kitchen tables across my electorate and met with my constituents about the Voluntary Assisted Dying Bill [and] it’s clear to me that the majority of the people I represent want me to support this Bill.”

“While I’ll carefully examine any amendments, it is my intention to support the Bill,” she said.

Labor left-winger Joe Szakacs will similarly support it, while Liberal MP for Colton Matt Cowdrey said he was yet to form a position.

Liberals Carolyn Power and Speaker Josh Teague did not respond to inquiries.

Sources have told InDaily if the Speaker is again called upon to decide the vote, Teague is expected to vote a different way than his predecessor.

McFetridge’s successor in Morphett, Stephen Patterson, told InDaily: “Now that the VAD bill has passed the Legislative Council, I will continue to consult with my electorate and finalise my decision before it comes to the House of Assembly, noting it is the most conservative euthanasia bill to be considered in South Australia.”

Labor leader Peter Malinauskas – who was not in the Lower House for the previous Bill – is yet to publicly declare a position on the current Bill, but told InDaily: “I take these votes very seriously.”

“I’ve said in the past there’s a version of law reform in this area I’m willing to support, but I’ll be looking through the detail very closely before finally deciding how I’ll vote,” he said.

His deputy Susan Close is leading the debate in favour of the Bill, and said she was “cautiously optimistic it will go through, essentially in the same form as it went through the Upper House”.

“It’s very tight, but I think it will fall in favour rather than against,” she told InDaily.

Fellow euthanasia advocate Nat Cook said “my feeling is we might get on the better side of history”.

In a statement today, Marshall – who will back the Bill – said: “The Voluntary Assisted Dying legislation currently before parliament is an emotional issue for the South Australian community.”

“As the leader of this state I take my responsibility to have such legislation promptly resolved by the Parliament, one way or the other, seriously.

“This is an important issue and I do not want its consideration to be unduly delayed through parliamentary processes.

“That is why I have decided to progress debate on this legislation immediately. 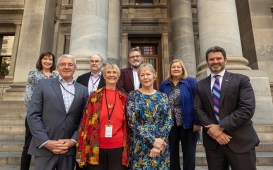 “The community expects parliament to act swiftly and decisively on issues that impact them and that is why I am allocating Government Business time to debate the legislation now that it has passed the Upper House.

“The legislation is a conscience vote and I remain respectful of my colleagues to vote accordingly.”