A spokesperson for the Courts Administration Authority told InDaily this morning that Chief Magistrate Mary-Louise Hribal was currently considering the matter but a decision was expected today.

It comes after InDaily revealed yesterday that Judicial Conduct Commissioner Ann Vanstone had launched a preliminary investigation into allegations the Magistrate sexually harassed a District Court judge’s associate in 2018.

Bitmead alleged the harassment occurred over three weeks in February 2018 while she worked in close proximity to the Magistrate, who InDaily has chosen not to name and who continues to preside over court cases.

The Courts Administration Authority spokesperson told InDaily this morning that Kourakis’ investigation would result in protocols being developed that would raise “matters of this kind” promptly to the attention of the Chief Justice, the Chief Judge and the Chief Magistrate.

Meanwhile, Vanstone issued a public statement this morning saying she was “troubled’ by recent reports of alleged inappropriate conduct by judicial officers.

She said inappropriate conduct “should not happen in any workplace” and “if it does happen it should be called out and the person responsible for the conduct should be held accountable”.

“Judicial officers sit at the top of this hierarchy,” she said.

“If judicial officers regard such a culture as acceptable and bring it with them to the courts, they will face an uncertain future.

“I have little doubt that this is the case for most of South Australia’s judicial officers.”

The Equal Opportunity Commission’s review found that 42 per cent of the 600 South Australian legal practitioners who responded to a survey reported experiencing sexual or discriminatory harassment at work.

Just under 13 per cent of those said the behaviour was perpetrated by judicial officers.

Vanstone said that until last Friday, her office had not received any sexual harassment complaints, which she suspected was due to a “fear of speaking up”.

“I understand the fear but if it is not reported, it will not stop,” she said.

“I call on any individuals who have experienced inappropriate conduct by a judicial officer to find the courage to make a report to me – because if not you, then who?”

Senior lawyer Claire O’Connor SC, who has previously spoken out about her own experience of sexual harassment in the legal profession, has called for the Magistrate under investigation to be stood down while Vanstone conducts her inquiry.

It’s an indictment on our profession

She told InDaily there were “many precedents” in South Australia when judicial officers who were accused of inappropriate behaviour were stood down while they were being investigated.

“You cannot have someone who is, on behalf of the community, passing judgement, delivering judgement and imposing penalties when there’s an allegation that’s been made and is yet to be investigated,” she said.

“There has to be an environment where because you’re in the coalface of the delivery of justice, if an allegation is made against you then people have to have faith in the judicial system.”

Women Lawyers’ Association SA President Kymberley Lawrence said the review, and Bitmead’s allegations, were an “indictment on our profession”.

“The issue (of sexual harassment) has been there for such a long time, but this culture of silence is being broken by the Equal Opportunity Commission report,” she said.

“It is now something that is unable to be ignored by the profession.” 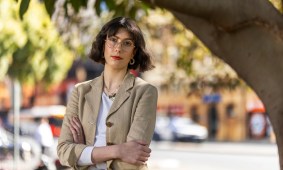 “Everyone should be able to feel safe and respected at work,” she said.

“The recent Equal Opportunity Commission Report acknowledged the reluctance members of the profession have had when it comes to making complaints, and we commend the courage of those who do report inappropriate behaviour.

“It is important, and reassuring to see, that these troubling allegations are now being thoroughly investigated.

“It is imperative that Ms Bitmead is supported throughout and beyond these investigations, and that due process and procedural fairness are afforded to those involved.”