The nurses’ union says 139 patients were waiting in EDs across Adelaide early this morning – including eight mental health patients waiting in the Royal Adelaide Hospital for more than 60 hours, as at 8am.

Dabars said at the Royal Adelaide Hospital alone, 64 patients were waiting for a bed, including 16 for more than 24 hours.

“This is simply unacceptable,” she said.

“We don’t know what needs to happen to spur the Marshall Government into action.

“People’s lives and wellbeing are being put at risk every day.”

SA Health’s own emergency department figures, published in real time online, showed that at 10.30am, there were 129 patients waiting in EDs across Adelaide’s hospitals.

That included 60 at the Royal Adelaide Hospital, 35 at Flinders Medical Centre, 16 at the Queen Elizabeth Hospital, 12 at the Lyell McEwin Hospital, three at Modbury Hospital and three at the Womens’ and Children’s Hospital.

Of those, 20 had been waiting for more than 24 hours – including 16 at the RAH, three at the QEH and one at the Lyell McEwin.

“This is shockingly bad – it’s off the charts,” he told InDaily.

“This is the latest example of our system in complete crisis.

“These are the worst figures that I’ve ever seen the hospital system facing.

“It shows there’s a complete disaster hitting our emergency departments where we can’t properly care for the people that we need to care for.”

Picton said “an emergency department is not somewhere people want to be stuck for over 24 hours waiting for a bed”.

“We know particularly for people with mental health conditions, it’s going to make their situation a lot worse,” he said.

The concerns have been echoed by the doctors’ union, which has recently asked SafeWork SA to investigate overcrowding conditions inside the RAH following two recent snap inspections.

“Waiting for those beds for that length of time is just unacceptable and just speaks to where our health system is at,” she said.

“It also speaks to the lack of resourcing that we have in our hospital system to be able to make these patients flow quickly.”

Mulholland said when she checked the figures this morning there were 51 mental health patients waiting in EDs.

“It’s not about making an ED bigger anymore, it’s not about all the other things that the department will say will make these things better, they’ve been saying that for years,” she said.

“We just want it fixed. We just want patients to get the care they need in the appropriate therapeutic environment that they’re entitled to and that the clinicians aren’t distressed waiting for that to happen.”

The extraordinarily high number of patients in EDs this morning follows a forum held last week to try to address the mental health crisis in SA, criticised by key players as a “missed opportunity”.

The forum was organised by Health Minister Stephen Wade, in response to escalating concerns about the mental health system.

Those concerns came to a head after InDaily revealed the executive director of mental health and prison health services at the Central Adelaide Local Health Network (CALHN), Adjunct Professor John Mendoza, had quit his post a year into his three-year contract, unleashing on SA Health and the State Government over a lack of action.

At the time, he said he wasn’t going to waste his time pretending to be part of a reform effort that wasn’t there, and afterwards described the forum as a “missed opportunity”.

The nurses’ union this morning said the forum “appeared to achieve absolutely nothing”.

“The other consequence, of course, is that it just adds to the enormous pressure on a system that simply isn’t able to cope with the overwhelming demand.”

Dabars said the state’s health system had “never been sicker” and called on the Health Minister to “act now before lives are lost”.

“The waiting times are a very real danger to the lives of patients,” she said.

“The crushing burden on our hospital system is resulting in missed and delayed care.”

Health Minister Stephen Wade said “Monday is often a challenging day in terms of demand” and he blamed this morning’s particularly high numbers on a “lower level of discharges” over the weekend.

“That was recognised by our clinicians and our health managers this morning, so action has been taken, coordinating across the system, in particular to try and improve patient discharges,” he told reporters this afternoon. 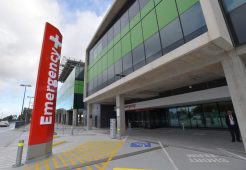 “It’s often unpredictable as to which hospital is going to have more presentations than another,” he said.

“It’s really important that our hospitals work together – that’s what they’re doing.”

Wade said “additional clinical support” had also been put in place to “navigate patients who might be able to more appropriately get their care at community-based venues”, such as Priority Care Centres and the Urgent Mental Health Care Centre.

InDaily has also asked SA Health for a response.