Wine Australia’s April 2020 to March 2021 export report shows Australian wine exports declined by 4 per cent in value to $2.77 billion in the 12 months to March 2021, compared with the previous corresponding period, driven principally by the toll taken by high Chinese tariffs.

While Australia’s four next biggest markets – the UK, US, Canada and New Zealand – all showed strong growth, exports to China fell 18 per cent to $1.02 billion for the 12-month period.

Wine exports to China for the December 2020 to March 2021 period were just $12 million compared to $325 million in the comparable period a year ago.

South Australia is typically responsible for half of Australia’s annual wine production. Sixty per cent of Australian wine is exported, with China traditionally the biggest buyer.

SA Wine Industry Association chief executive Brian Smedley said the moving average total would lead to further declines as the reporting period moves toward the end of November, which will mark one year of Chinese tariffs.

He said the figures were “reflective of the current mood” in the industry.

“We probably weren’t expecting anything different in relation to China but it’s pleasing to see the other markets are continuing to hold up,” Smedley said.

“We’d built up our exports over 15 years or so to China so there’s a cliff that’s been created as a result of the tariff imposition and that means we haven’t simply tapered off – we’ve gone over that cliff in relation to the export of bottled wine.

“In South Australia, we’ve got a red wine emphasis and China was very much into our red wine but that doesn’t mean to say that other countries are not enjoying the opportunity to have more of our product, which we are starting to see in certain markets.

“But the issue of bridging the gap will take significant time – this is not something you can fix in a month or a quarter or a year. It is going to be a long, long haul in terms of looking at the opportunities in each of the markets.”

The tariffs were extended for a further five years on March 28. 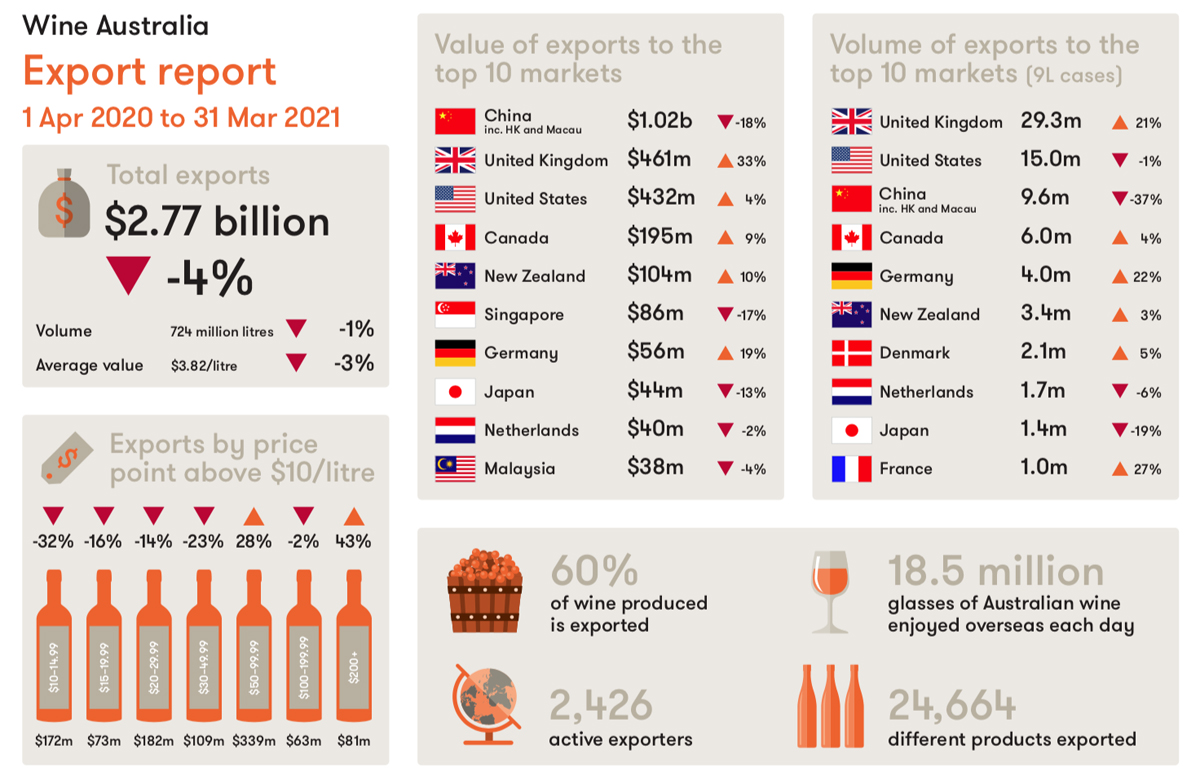 Wine Australia Chief Executive Officer Andreas Clark said the sharp decline in exports from December to March was due principally to the steep decline in exports to mainland China as well as the cumulative effects of three consecutive lower vintages in Australia leading to less volume available to export.

“Notwithstanding the impact of China’s tariffs, we were still looking at a potential downturn in exports over this period simply due to the supply situation,” he said.

Australian exports to China in December 2019 were about $170 million but fell away to about $50 million a month from January to March as the beginning of the coronavirus pandemic started to hamper trade.

Three of the four months were the lowest in terms of Chinese exports in the reporting year, which should act as a warning of even more dire figures on the way in coming months when exports are compared with stronger performing parts of 2020.

Smedley said the industry in South Australia was still putting the finishing touches on the 2021 vintage, which would end in the next few weeks.

“Everybody focuses very much on vintage and then once that happens they’ll be thinking about selling,” he said.

“In terms of regional employment, people have been endeavouring to use everyone they can get hold of to assist them with the vintage but those types of questions about the future will come to the fore over the next few months as people decide how they are going to go about continuing.”

Smedley said a number of state and federal programs such as Wine Australia’s Wine Connect virtual platform, which launched on Tuesday, would be vital in helping wineries reach new markets, particularly while overseas travel remained off the agenda.

“The programs have been oversubscribed … so there is obviously a willingness to wear out that shoe leather as they endeavour to sell their product,” he said.