The State Commission Assessment Panel (SCAP) will tomorrow discuss revised plans for the proposed “Wyndham Grand Adelaide”, which include reducing the hotel’s height from the originally-approved 39-storeys to 36-storeys.

The $150 million hotel was once touted to be Adelaide’s future tallest building, but its proposed new height of 123-metres will see it sit below the 37-storey Crowne Plaza building on Frome Street, which currently towers over the city’s skyline at 138-metres. 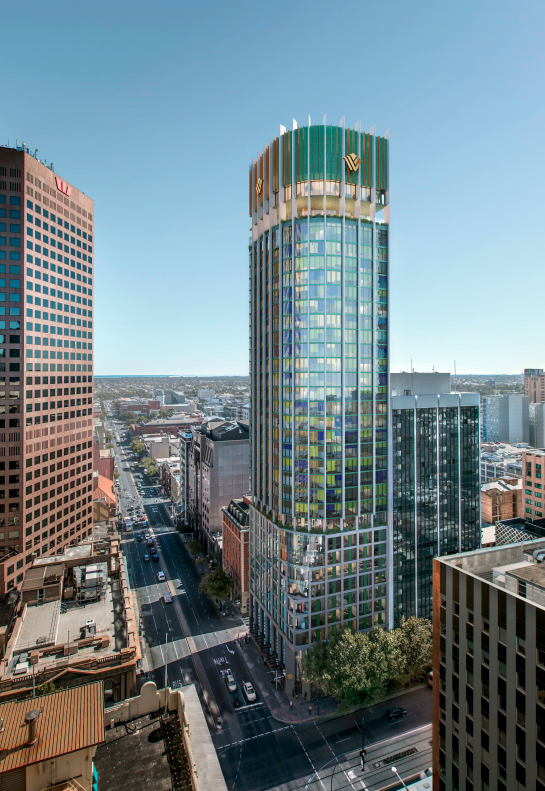 It will also be smaller than the upcoming 37-storey Central Market Arcade redevelopment.

Original plans were approved by the SCAP in 2018, but construction is yet to start at the site, which has become dilapidated since the State Government vacated the longstanding Adelaide Metro infocentre in September 2019.

In November, Adelaide-based developer Guava Lime, which is developing the hotel in conjunction with architect Loucas Zahos and Equinox Property, announced on its website that the hotel would open in 2024 and only reach 34-storeys.

InDaily asked Guava Lime why the height had changed and when construction would begin, but is yet to receive a response.

Alongside the height change, the new plans propose to change the building’s use from what was originally approved as a hotel, residential apartment, retail and office block to solely a hotel with associated restaurants.

The revised plans include seven luxury suites and seven presidential suites on levels 29 and 30, as well as two restaurants, a bar, wellness centre, pool, gymnasium and executive lounge.

SCAP members have been urged to approve the revised plans on the basis that they present only “small diversions” from development plan requirements.

But the plans have received blow-back from Government Architect Kirsteen Mackay, who in a letter to the SCAP warned that while she supported the “minor reduction in the building height”, she was “unconvinced” by the design of the building’s corner.

“I recommend further refinement of the podium form and expression to optimise its positive contribution to the prominent street corner,” Mackay wrote.

State Planning Commission senior officer Elysse Kuhar also wrote that the plans lack bicycle parking at a ratio of 10 spaces for guests and one for every 20 staff.

According to Guava Lime, the Wyndham Grand Adelaide will have a “modern interior concept with green walls, marble fixtures and plush furnishings all accented with bold splashes of colour, as well as floor-to-ceiling windows that frame views of Adelaide’s skyline and surrounding area”.

In November, it wrote that the hotel would feature an infinity pool with a sun deck and a bar offering “panoramic city views”, as well as an “upscale” restaurant, a second rooftop restaurant and wine bar.