A walk through the 93-year-old arcade, with a heritage-listed façade and entrances on Rundle Mall and Grenfell Street, reveals at least 14 empty storefronts.

The arcade’s website lists 23 businesses located on the premises. Of these, InDaily counted 19 still open and four that have closed down.

Regent Arcade is currently owned by Wingpower Holdings Pty Ltd, which is held by investors from Hong Kong who have offices in Adelaide.

Pat Thomas, manager of small independent fashion boutique Showies in Regent Arcade, said there has been “no real communication” since the new landowners took over.

“It’s gone downhill, you could see the decline before COVID, it was just people closing and there was a lack of communication and then COVID hit and that was it,” Thomas said.

I’ve been here 15 years and I’ve never known the arcade ever like this.

“Hopefully [the landowners] will do something more about it, but they’re not here.”

Wingpower Holdings did not respond to requests for comment from InDaily, made through Harcourts.

Thomas said her business, which has been a tenant of the arcade for around 30 years, is coping with reduced foot traffic due to a loyal customer base and an increase in online sales.

“We’re lucky because we have a clientele who’ve been here for a long time, but it’s sad,” she said.

More and more customers are coming through and going ‘what’s happening to this arcade?’

“It’s frustrating from someone who’s been here a long time and knows what this arcade is capable of and what customers are looking for in terms of service.

“So hopefully they look closely and try and really get people to come in and offer them a good deal to come in.

“Because I think if that happens, the arcade will flourish again.”

Sarah Rothe, who closed her Regent Arcade jewellery store in February after six and a half years of trading, said the state of the arcade was a key factor in her decision to shut up shop.

“The arcade is just dead and all around me was empty stores,” Rothe said.

“I decided that I just kind of wanted to get out of retail more than anything to focus on my creativity … but what led to that was also the arcade has been poorly managed for a very long time.

“Even just walking through the arcade, you’d have so many people just say ‘wow, there’s no shops here’ and I had a few people ask why everybody’s leaving and why it’s so dead.” 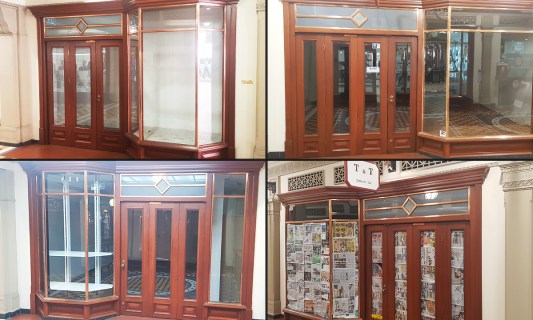 Sarah Rothe is one of several business owners who have recently closed their doors at Regent Arcade. (Photos: Thomas Kelsall/InDaily)

Rothe had to close her business for two and a half months last year at the height of the pandemic, suffering a “40 per cent drop in revenue”.

She said an increase in commission-based work helped her survive the “huge decline in foot traffic” when her store reopened, but adds that it was difficult to secure rent deferrals from the landowners.

“Their communication was terrible, and trying to get any kind of rent relief from them took like eight months to even get a response back,” she said.

“Their rent relief was very minimal as well. It really didn’t feel like they were trying to help us whatsoever.”

Rothe said she was eventually granted a 20 per cent reduction in rent.

“Commissions really got me through, but yeah, the arcade is just dead and it’s not a good spot to be in.”

Monica Watts – co-owner of vegan café Veggie Vie located in the centre of Regent Arcade since 2015 – echoed these concerns, and said the previous arcade owners consulted with her more often despite the problems that existed pre-COVID.

“We would love it if they filled up the shops,” Watts said.

“We don’t have to rely on the foot traffic as much, but I know that it affects the other businesses a lot.”

The Veggie Vie owner pointed to the retailers in the arcade that rely on incidental sales and impulse buys as the most affected by the arcade’s reduced traffic.

“When Renew Adelaide were working with the arcade … it was very successful, and we’d love a program like that to be involved again,” she said.

“I don’t know why the current owners just are not doing that.”

The organisation – funded by the Adelaide City Council – activated more than 10 spaces in Regent Arcade under the previous owners, according to Renew Adelaide CEO Andrew White.

“We had quite an extensive history activating spaces within the arcade,” White said.

“A number of those were only intended to be sort of more short term, pure activation things just to sort of contribute to the vibrancy of the arcade.

“So the strategy I guess was different at different times.”

Sarah Rothe Jewellery, Have You Met Charlie?, florists Boo & Who!, and fashion retailers Created Range, Closet Mod and Average Cat Clothing are among the businesses brought into the arcade under the Renew Adelaide program who have since left the precinct.

One store has moved to Adelaide Arcade. (Photo: Thomas Kelsall/InDaily)

Leatherworks – a small design studio producing handmade leather goods such as bags, wallets and notebooks – has graduated from the Renew Adelaide program and now has a commercial lease to trade in Regent Arcade.

White pointed to Leatherworks as one of Renew Adelaide’s success stories.

The Renew CEO also said his organisation was in “ongoing discussions” with an Australian representative of Regent Arcade’s owners.

“We’re really keen to get in there and try and activate as much as we can just to help the arcade itself, but more broadly the Rundle Mall precinct,” he said.

Regent Arcade has been involved with Renew Adelaide start-ups over the past five years. (Photo: Thomas Kelsall/InDaily)

But Showies Manager Pat Thomas said previous Renew Adelaide ventures in the area did not align with the arcade’s clientele.

“I think the last owners put in a lot of Renew Adelaide … there’s nothing wrong with that, but it didn’t gel with the arcade,” Thomas said.

“So then they would just move out then it just was a snowball and then COVID hit.”

The Adelaide Economic Development Agency (AEDA), a subsidiary body of the Adelaide City Council set up to attract investment in the CBD and promote Rundle Mall, confirmed to InDaily it is concerned about the lack of tenants in Regent Arcade.

The agency’s managing director, Ian Hill, said the AEDA has been in touch with Regent Arcade’s managers to “offer support”.

“AEDA supports and wants the city to grow and continue to be a prosperous and vibrant experience for city workers, residents as well as visitors from interstate and overseas,” Hill said.

“AEDA’s Business and Investment Team have been in contact with the Arcade’s managing and leasing agents to offer support and will continue to do so.”

The challenges at Regent Arcade come as the Adelaide CBD grapples with an overall decline in foot traffic since the pandemic came in March last year.

According to a Roy Morgan data study published last month, the movement of people within the Adelaide CBD has recovered to 83 per cent of what it was pre-COVID.

South Australia’s capital is faring better than others across the country, with Perth (72 per cent) and Brisbane (68 per cent) the next closest, while Melbourne (39 per cent) and Sydney (47 per cent) have been the slowest to recover CBD activity.

Office occupancy in the Adelaide CBD sits at around 70 per cent according to the latest ANZ/Property Council Survey published last week, with a portion of the city’s workforce still working from home.

Vacancy rates in the CBD are around 16 per cent according to Property Council SA Executive Director Daniel Gannon, who said issues like Regent Arcade’s empty shopfronts emerged prior to the pandemic.

“A lot of those challenges aren’t COVID related – some of those problems have been hanging around for some time now,” Gannon said.

“In an environment like Regent Arcade, there is a great opportunity to cluster retailers and tenants to help benefit all retailers in that particular precinct.

“But it will take a proactive landlord making strategic decisions and carefully curating this particular strip of Adelaide.”

Gannon, who was a Renew Adelaide board member from 2015 to 2020, also pointed to the organisation’s model as a pathway forward to revitalise the arcade.

“Historically the Renew Adelaide model has worked really well when a landlord who owns a particular strip of empty shops is able to put them on the market for entrepreneurs and start-up businesses,” he said. 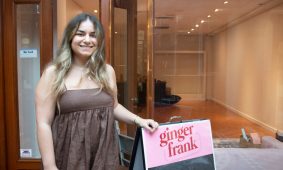 “When one cluster of buyers and consumers are attracted to that particular strip, it means that all the tenants will benefit.

“In time with more customers, the entire arcade, for example, will undergo transformation.”

Regent Arcade opened in 1928 as Regent Theatre, a grand cinema which had seats for more than 2200 patrons.

The theatre was downsized in 1967 and partially transformed into a shopping arcade until the smaller cinema was completely shut down in 2004.