The 7500-square-metre Port Road site near the Thebarton tram stop has, since the 1990s, been used as a free car park accommodating up to 350 cars.

Excessive car use has deteriorated the surrounding landscape, prompting the council to suggest transforming the site into a new city beach to replace the existing CBD site, which will be sold to raise cash in the wake of the pandemic hit on council coffers.

According to a report presented to Park Lands Authority members, the council considered three potential sites for a new “city beach”, including the Bonython Park site, Gladys Elphick Park northwest of the city and King Rodney Park east of the city.

The report states the Bonython Park site is favoured by both the council and Volleyball SA, which leases the current Pirie Street site from the council.

If supported by councillors and Park Lands Authority members, Volleyball SA would be required to fund the entire works, including site remediation.

It would also need to receive a grant from the State Government to operate and maintain the facility once it is established. 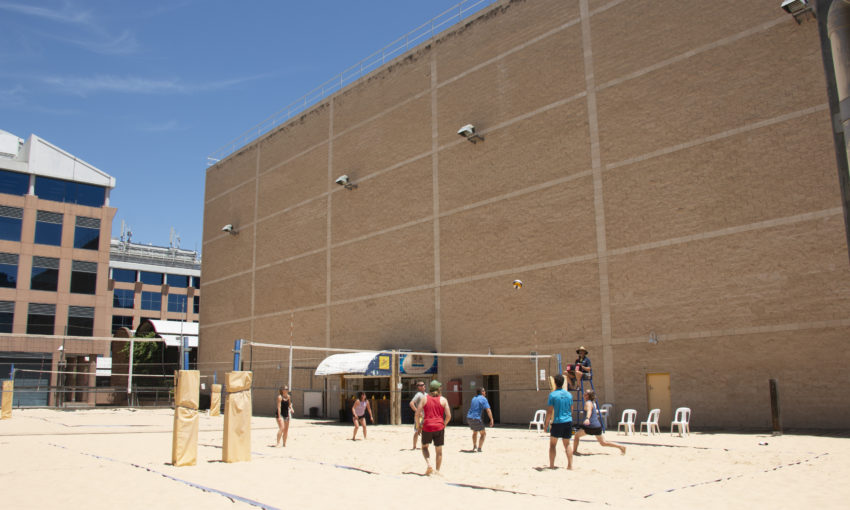 The council report states the Bonython Park site is “highly visible” from Port Road and is within walking distance from several schools, the University of South Australia city west campus and the North Terrace biomedical precinct.

“Repurposing these former netball courts into a beach volleyball facility with supporting landscaping can deliver a number of benefits,” the report states.

“Being close to the edge of the park, the proposed location of the beach volleyball facility will allow it and events to operating simultaneously.

“There are some constraints to the site including uneven ground, underground services and probable site contamination through the various uses of the space including the bitumen courts themselves.”

If supported, the new “city beach” facility would comprise a “multi-purpose space” for beach sports including volleyball and soccer, as well as a car park, and a building with changerooms, toilets, administration and a kiosk.

It comes as the council this week released a tender to hire a real estate company to sell the Pirie Street volleyball courts.

What CBD workers will lose with the sale of City Beach

According to the tender documents, the council wants to sell the courts, alongside the adjoining Pirie Street UPark building as an additional “value add” opportunity.

“The 211 Pirie Street site and adjoining Pirie Flinders UPark are located within the Capital City Zone which has no height restrictions with building height dictated by airport operations,” the documents state.

“The offer of the adjoining Pirie Flinders UPark as a value-add opportunity may support an improved design and value proposition including a wider catalyst opportunity supporting City investment and employment.

“An improved value proposition compared to the existing UPark asset and income stream is required.”

The volleyball court sell-off comes as the council faces multi-million dollar operating losses in the wake of COVID-19.

Proceeds are expected to be put into a new “future fund” to help the council recover financially from the pandemic.