The Opposition seized on the figures – released by the federal government late yesterday – to declare SA’s utilisation rate “the worst in the country” – 17 per cent lower than Victoria and Queensland.

But Health Minister Stephen Wade argued the speed of South Australia’s rollout “remains closely aligned with our share of the national population”.

As of yesterday, the state had administered 37,656 doses of the 561,734 given in state and territory clinics around the country – around 6.7 per cent, which Wade said corresponded “to our share of the national population, which is 6.9 per cent”.

“This is a far better indicator of how our vaccine rollout is tracking,” he insisted.

SA had also accounted for 740 of the 3,166 doses administered in state and territory clinics in the 24 hours to Sunday, April 11. 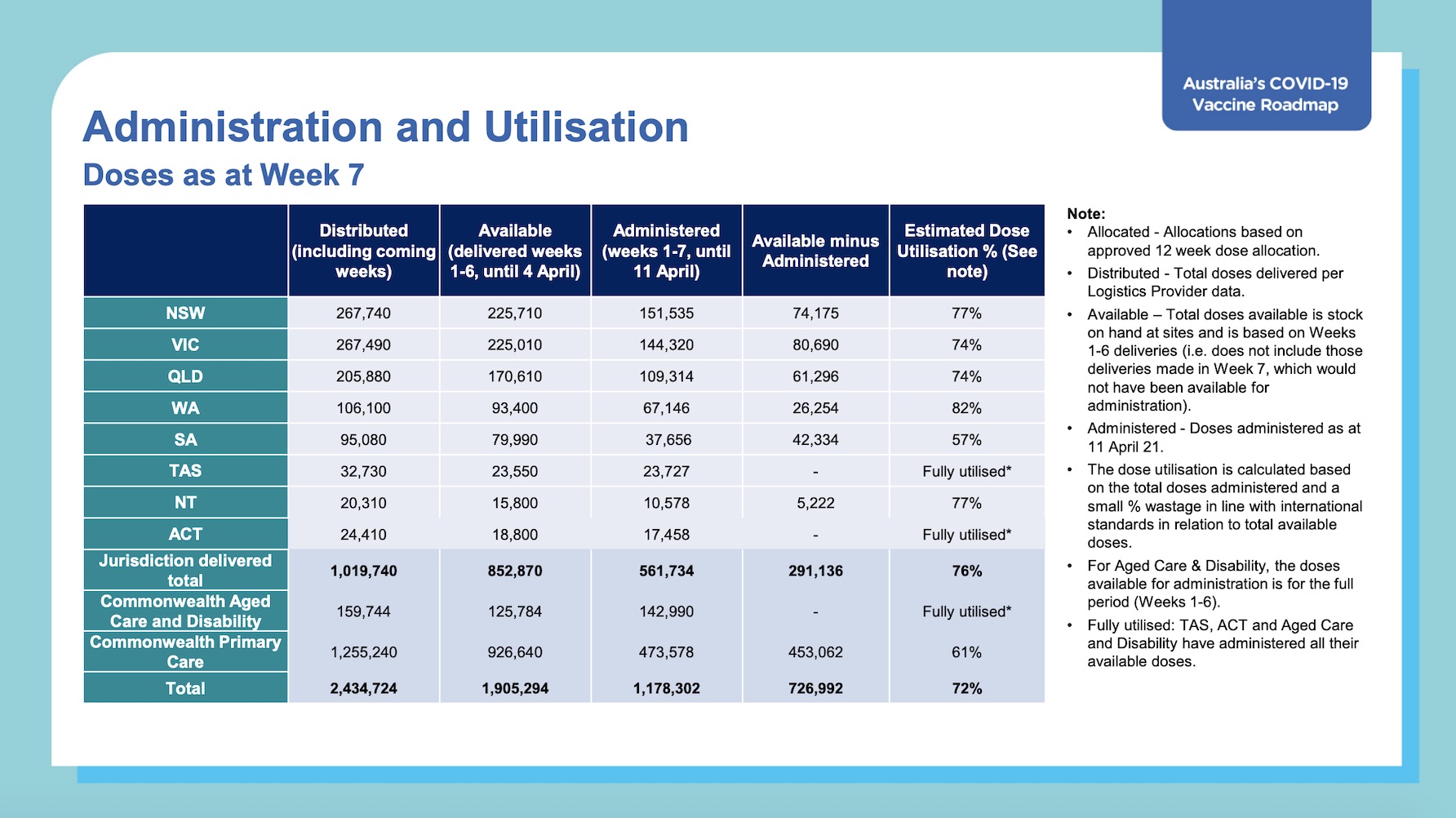 “It should be noted that the amount of vaccines SA has administered in the past 24 hours is well above our proportion of the national population, as we administered more doses than any other state other than Victoria,” Wade said in a statement.

“Opening more clinics across the state where they are needed, as well as establishing a vaccination hub at the Adelaide Showgrounds, will help us to further scale up our rollout in the coming weeks.”

Wade today revealed the showgrounds site would open on April 30 and be a Pfizer-dedicated facility catering for under-50s, after national advice last week put the brakes on the AstraZeneca rollout with advice it was not suitable for people under that age because of potential links to blood clotting in rare cases.

He said the Government was also seeking to secure two more mass vaccination sites, at Playford Civic Centre in the north and a former Masters hardware store site at Noarlunga in the south.

SA’s rollout figure currently equates to 2.13 for every 100 people in the state, the second lowest per capita figure in the country – behind only NSW, which has suspended its vaccination program.

But Wade insists when GP-administered doses are factored in “we actually exceed our share of the national population”.

Labor’s health spokesman Chris Picton said there was “an issue with vaccine supply” in parts of Australia, “but not here in SA where we’ve got over 30,000 doses sitting in the fridge not being used”.

“The federal government’s figures show we’ve got the worst utilisation rate in the country – we can’t allow that to continue,” he said.

“This is not something that’s happened overnight – we’ve consistently had the second-lowest per capita vaccination rate.”

The data shows a further 616,568 doses have been administered via the Commonwealth, from which SA has given another 12,449 in aged and disability care facilities and 39,657 in primary care.

The latter is largely administered by GPs, with Australian Medical Association SA president Dr Chris Moy saying the rollout is “not as simple as just putting the vaccine into people’s arms”.

“Nevertheless, we still could all do better – that’s in every sector,” he told InDaily.

“It still needs to be improved – it certainly has not been helped by a combination of needing a change in direction, and the negativity of the media to some degree.”

He said the media and public “have got to support the changes” to the rollout, with AstraZeneca last week declared unsuitable for recipients under 50, arguing “the fact is we’re extremely lucky to have safe and effective vaccines, and that’s been lost at the moment”.

He said the delay in state utilisation rates could be due to the lag between first and second doses, “but having said that, we could still do better”.

“There’s been frustrations with delays in deliveries, and frustrations with the change in provision, but I don’t think anybody has any idea how frickin’ big this is – it’s the biggest thing we’ve ever done,” he said.

“This is huge – last week when there was a pivot there was frustration, I think GPs got a lot of phone calls… but it’s no different to what’s been happening right through the pandemic, where we’re dealing with rapid changes [and] all of us have to roll with the punches, because we just need to – this is too big to fail.”

Moy said “our main job at the moment is to get that AstraZeneca out to over-50s as fast as we can, because they’re the biggest risk population”.

In a video message posted to Facebook, he conceded not all Australians will get their first dose by the end of the year, even though the Government has doubled its order of the Pfizer vaccine – but said targets were not practical as COVID “writes its own rules”.

“You have to be able to respond quickly to when things change and we’ve had to deal with a lot of changes.

“Rather than set targets that can get knocked about by every to and fro of international supply chains and other disruptions that can occur, we are just getting on with it.”

Launching the first of a series of daily vaccination data updates to be published online, he said Australia’s rate of 1.2 million to date was comparable to other major countries.

Meanwhile, Australia’s medicine regulator has today identified a second case of rare blood clots believed to be linked to the AstraZeneca vaccine.

The Therapeutic Goods Administration released a safety alert announcing the possible link. The blood clots affected a woman aged in her 40s who was vaccinated in Western Australia.

“The person remains in hospital receiving treatment and is in a stable condition,” the regulator said.

It is the second Australian report of a case of rare blood clots after a 44-year-old Melbourne man developed the condition following his AstraZeneca vaccination last month.

Expert advisers to the TGA have concluded the latest incident is similar to blood clotting cases seen in Europe and the United Kingdom.

There have been about 700,000 doses of AstraZeneca vaccines administered in Australia, so the two cases equate to a frequency of one in every 350,000 people.

The United Kingdom has found the overall risk of these rare blood clots was approximately one in 250,000 people who received the vaccine.

Deputy chief medical officer Dr Emily Kirkpatrick said there were now 13 active cases in the state, including a man in his 40s who remains in a critical but stable condition in intensive care.

Also today, Australia recorded its first COVID-19 death for 2021 after a man in his 80s died in a Brisbane hospital.

Queensland Health minister Yvette D’Ath said the Australian man succumbed to the disease overnight after returning from the Philippines.

It’s the first COVID death since a NSW man in his 70s died in late December from respiratory complications after being infected with COVID-19 in March 2020.