As revealed in InDaily yesterday, Professor John Mendoza has quit one year into his three year post as mental health executive director for the Central Adelaide Local Health Network, citing significant concerns within the system and unleashing on authorities for a lack of commitment to reform.

“I’m not going to waste my time in a sense pretending I’m part of some reform effort when it’s not there,” he told InDaily.

This morning he told InDaily that after speaking out yesterday, he was told to keep quiet – or leave the building immediately.

“I was basically given two choices: cease and desist – legalese for shutting up – or I could leave and be a free agent to make comment,” he said.

“I chose the latter because the issues are of such gravity that if I simply went silent after saying what I did yesterday it would be further demoralising for the staff as a first consequence.

“Regrettably nothing would change. The Government would simply carry on with these photo opportunity type announcements – brochurisation of policy – not serious reform, and the workforce would continue to really get into a critical stage of inadequate staff, deeply demoralised staff.

He said the directive was given by CALHN CEO Lesley Dwyer, but that she was only the messenger.

“The person who had to convey the directive was my CEO Lesley Dwyer but Lesley had been given that choice by the Government,” he said.

“It would have come from the acting (SA Health) chief executive Lynne Cowan and the Minister’s office.”

“She had to deliver a message and she managed that process with me compassionately and professionally.”

After resigning early, Mendoza was due to officially finish up on May 14.

In an extraordinary interview with InDaily yesterday, Mendoza said that while his decision to quit one year into his three-year contract was partly for family reasons: “If I felt I could continue to make a difference at a system level, if we could build on the work we’ve done here (in CALHN), if we could solve these systemic problems which South Australia has had for decades, I would stick at it. But there’s little prospect of that.

“The department is incapable of making a basic decision that enables the system to operate effectively.”

He said from February 2019 to February 2021 there had been a nearly 40 per cent increase in mental health presentations to the Royal Adelaide Hospital, but “no extra resources” from the State Government.

This morning he told InDaily he had been forced to cut $5.2 million out of his $140 million mental health budget this financial year.

“We’ve got to chop 3 per cent out of the budget when we’ve had a massive surge of activity,” he said.

Mendoza said CALHN’s mental health services had experienced eight of their busiest months ever in the past nine months, largely as a result of the devastating impact of the COVID pandemic – but he said authorities had ignored his warnings and predictions.

“All the teams have been working harder trying to manage an increased caseload all the time,” he said.

“The (mental health) triage (phone) line is at breaking point – no more money for that.

“Because of COVID, they were forced to move from the SA Ambulance Service building where they had access to a high quality communication system.

“We’ve got no equipment for them to operate. SAAS needed the space for COVID. There was no alternative that was presented to me.

“The service was in a training room with wires running everywhere having a makeshift triage call centre. This is the emergency access point for care. It’s still in a temporary [facility], what was a staff lounge over at Glenside.”

Mendoza said a third of the positions at the triage call centre were vacant.

“Staff don’t want to work there because really they’re working on a home-built communication system,” he said.

“It’s a joke. This is mental health as a priority.”

“If mental health is a priority – why is that the case with a triage service?”

He said his team at CALHN was 90 staff short, while at the Southern Adelaide Local Health Network, there was a shortage of 40 nurses.

This is the absurdity. The government takes on one hand and announces with the other.

“I keep being asked to find people who want voluntary separation packages when I can’t fill positions because the department is so out of touch with what is actually the reality.”

He said the government had been sitting on a detailed analytical report since 2018 calling for more specialist psychiatric intensive care beds.

“These patients by definition need the most intensive care and we are doing damage to them by keeping them in a very constrained space, with guards, where they can’t go for a walk, they can’t use their phone, they can’t talk to anyone, they are basically in solitary,” he said.

“We do the best we can in a very difficult situation.”

He accused Chief Psychiatrist Dr John Brayley and the government of ignoring the report.

“The department has done nothing about it,” he said.

Brayley rejected this in an interview on ABC Radio this morning, but conceded: “I think that the system needs a significant improvement and change.”

“In terms of that extra COVID response and the funding and extra programs, that has been done,” Brayley insisted.

“Extra capacity was put in place before February – we had up to an extra twenty beds available, as well as these other programs like hospital in the home, ambulance co-response etc [so] in terms of that increase in demand and putting extra responses into the system, that has occurred,” he said.

He said there had also been an ongoing “redesign of the community mental health services that’s being led by the local health networks”.

Brayley disagreed with Mendoza’s claims that the departmental response to the crisis had been incompetent and “indolent”, but agreed he shared concerns about potential human rights violations by the use of restraints.

“Yes, we have had that concern, particularly about restrictive practises – that’s linked to delays in emergency departments [but] there has been a response,” he said.

“There is a plan which is partly implemented which is going to continue to change and further improve the services and there’s more to come with that.”

Mendoza said suicides were increasing and that three people had taken their own lives in one week recently after being discharged from the Royal Adelaide Hospital and Queen Elizabeth Hospital.

“We lost three patients in a week which is a deeply troubling event for staff,” he said.

Mendoza said he was not able to get his message to Health Minister Stephen Wade, who he said was shielded by a “Praetorian Guard” of officials and staffers.

Mendoza said he would now set out a detailed plan for the Wade about urgent action that can be taken to reform the system.

If we don’t do anything, lives will be lost. Lives are already being lost.

“We have to skill up really quickly an adjunct service, a supplementary workforce to work alongside the specialists.

“We can do this today.

“We can implement them in the next couple of weeks, it’s not as if we have to take months. This is the sort of assertive agile response we need that we’ve seen with the pandemic but we’ve utterly failed to do it.

“We have done virtually nothing other than what I would call fairy floss activity.

“Setting up a mental health COVID hotline in SA that’s had a few hundred calls in its entire time… while we have the core service entry point – mental health triage – desperate for a functioning IT system, desperate for staffing, desperate for increasing the numbers of people working there to cope with the 20-40 per cent increase in call numbers. They get nothing. 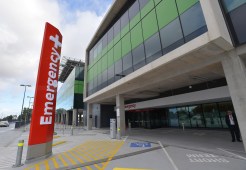 'Not going to waste my time': Mental health chief blasts SA Health on way out door

“It’s the specialist mental health services that have been left carrying the burden which is pushing clinicians to breaking point. It has broken some.”