In an email to councillors and staff this morning, Simms announced that he would resign from the council “immediately” to pursue a career in state parliament, filling Parnell’s winnable seat in the Legislative Council.

It comes after Parnell announced to party members this morning that he had decided to retire from Parliament next week “to give our new lead candidate, Robert Simms, the opportunity to make his mark in Parliament ahead of the election”.

The founding member of the Greens SA and first Green elected to parliament at the 2006 election told InDaily that his last day in Parliament would be on Thursday, to give officials enough time to process his resignation and prepare for Simms’ official swearing-in ceremony when Parliament resumes from a five-week break on May 4.

Simms, who was elected by Greens members in December as their lead Upper House candidate, wrote that he was required to resign from the council immediately to be eligible for the Legislative Council seat.

He described the career move as an “exciting opportunity” that would allow him to “better promote action” on issues that he had been advocating for as councillor.

“My second term on Council has been unforgettable in so many ways and I have no doubt that the experiences I have had will stay with me for a very long time,” he wrote.

“I’m grateful to the residents and ratepayers for giving me the opportunity to represent them.”

It is the second time Simms has prematurely left the council, after he resigned in 2015 during his first term to fill the seat left vacant by Greens Senator and Parnell’s wife, Penny Wright.

That resignation forced city ratepayers to fork out upwards of $100,000 for a supplementary election.

Simms served in the Senate until his defeat at the 2016 election, before being re-elected to the Adelaide City Council in November 2018.

In his email to councillors and staff this morning, Simms acknowledged that his resignation “will create some disruption for the City Council”.

“ I hope that you will accept my apologies for this,” he wrote.

Upon being sworn-in to the Legislative Council, he is expected to take up responsibility for Parnell’s motions and bills that are yet to come to a vote.

Parnell said that after deciding in July to not recontest his third eight-year term at the March 2022 state election, it “made sense” to give Simms as much time as possible to familiarise himself in the role. 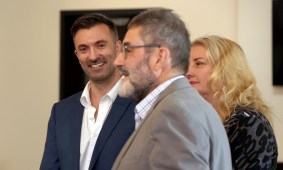 “It was important for me to have continuous representation, because often when someone leaves there is a gap,” he told InDaily.

“Basically it will be seamless – I will resign on Thursday and Rob will be sworn-in the very next sitting day.”

He said his work launching the Greens party in South Australia and promoting action on renewable energy were career highlights.

But he said he would leave politics “disappointed” about the state’s transport policy, which he described as car-centric.

Parnell will deliver a valedictory speech in Parliament tomorrow.

He said during his retirement, he would spend time developing educational resources to improve people’s understanding of civics and politics.

He said he would also do unpaid work for not-for-profit community organisations.

The city council and SA Electoral Commission are yet to formally announce a by-election for Simms’ vacant seat.