According to PointData’s Autumn 2021 “Lay of the Land” report, a third of Adelaide suburbs achieved annualised growth of more than five per cent in the six months to February 2021 while 90 per cent of regions achieved some growth over the period. This was up from 70 per cent in December and 56 per cent a year ago.

Outer seaside suburbs including Sellicks Beach (28.26 per cent), Maslin Beach (25.19 per cent) and Largs Bay (18.62 per cent) were among the fastest movers over the six months as buyers moved to snap up homes in some of Adelaide’s last affordable coastal addresses.

While there were pockets of high growth across Adelaide, overall the southern half of greater Adelaide outperformed the northern suburbs.

Inner south and southern hills face suburbs such as Ashford, Myrtle Bank, Fullarton, Craigburn Farm and Upper Sturt also fared well but a number of these suburbs were enjoying a market correction after a sluggish performance in the previous six months.

The most notable pockets of falling values observed in the six-month price trends map were around Glenelg North in the west, from Kensington to Wattle Park and Auldana in the east and the areas around Golden Grove to Greenwith in the north.

PointData lead data analyst James Edwards said the performance of outer coastal suburbs would be one to follow over time see the ongoing impact of new housing developments in the areas and the influence of remote working on lifestyle choices.

“Those suburbs are pushing the limits of daily commutes but as people discover the freedom of working from home they are perhaps able to relocate to an area that provides the lifestyle benefits of being in a desirable beachside region rather than suburbia,” he said. 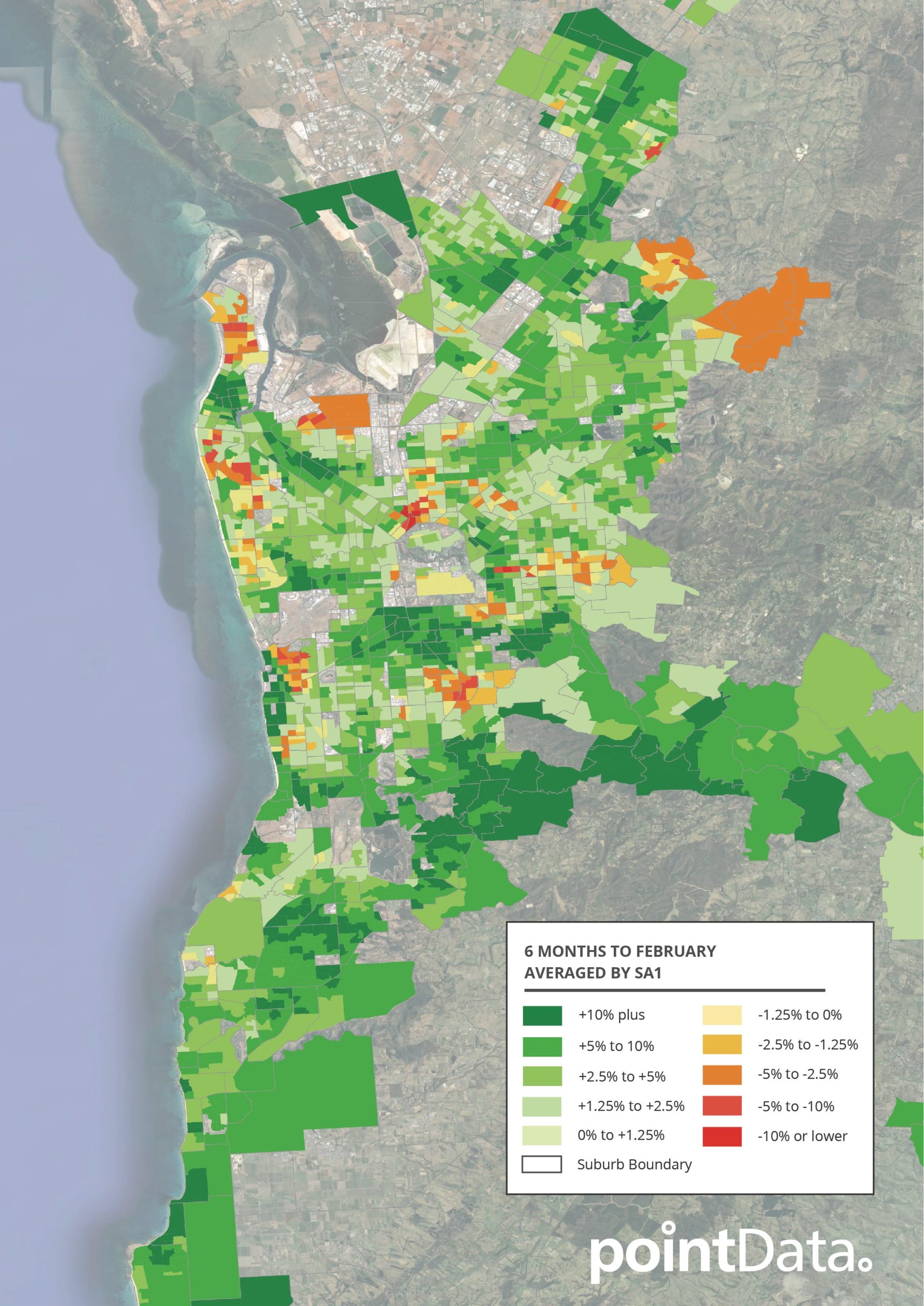 It also pointed to BankSA’s Housing Finance Data Snapshot from March 1 that showed an eighth consecutive monthly rise in new lending was recorded in January 2021, up 44 per cent on the same time last year before pandemic-related restrictions were imposed.

First-home buyers represented 36.5 per cent of loans to owner-occupiers, a category which rose 10.9 per cent in January and is now up 52.3 per cent on a year ago. Investor loans are also rising again after a quiet year in 2020.

The PointData report said while listing numbers in the first two months of the year were commonly below the annual average, Adelaide’s real estate market had recorded particularly low numbers at the start of 2021.

“High prices and quick sales indicate current demand is high so it could be expected that listings will increase as more sellers look to take advantage of the rising prices being recorded in the market,” the report said.

“However, high prices and strong competition between buyers can have the opposite effect for some potential sellers. People looking to upgrade their home may become hesitant to sell if they cannot easily secure the next home, compounding supply issues if they choose to wait out the current cycle.”

Edwards said short-term supply was relatively consistent with other years but long-term supply fell away during the first coronavirus shutdown last year and had not recovered because properties had either been removed from the market or eventually sold after long campaigns.

He said there were also a variety of factors on the demand side too, such as first home buyers converting holiday funds into house deposits and people returning to SA from the eastern states where house prices were much higher.

“There’s also speculation that there might be a growing amount of interstate investment into the Adelaide market because it is performing quite well at the moment and it is quite affordable compared to trying to buy an investment property in Melbourne or Sydney,” Edwards said.

“The primary message coming out of the data is that Adelaide is in a great space at the moment in terms of the property market, which is quite buoyant.

“The activity levels are still reasonably high for those who own property and values are strong – Adelaide is in a growth period but it is certainly not growing at a rate that makes it unaffordable.”