In 2020, global governments intervened in their societies and economies in unprecedented fashion, reacting to the threat of coronavirus in previously unimaginable ways.

Across Australia, some forms of employment were effectively proscribed by state governments, and many thousands of other workers suffered from lost or reduced employment as a result of a pandemic response that imposed restrictions on individuals’ freedom to move and congregate freely.

Even in South Australia, where the impact of the virus itself has to date been inconsequential, the impact of the Government’s pandemic response on our society and the function of our economy has been dramatic. The labour market for example has been significantly impacted, with unemployment rising from 5.7 per cent in February 2020 to a high of 8.8 per cent in June. As of February 2021, it remains at 6.8 per cent; the highest of all Australian states and territories.

In March 2020, the dominant political narrative was that we were putting social, cultural and economic differences aside, standing side by side ‘in the trenches’, making joint sacrifices to keep our communities safe. As it turns out, analysis of small area labour market data for Adelaide in 2020 shows that it didn’t really play out that way.

Comparison of this data between March and September 2020 shows that, across Adelaide, the workers most impacted by the Government’s pandemic policy response tended to be those living in the city’s most disadvantaged regions. The data shows that worker populations in disadvantaged regions were disproportionately impacted compared with leafier suburbs over the course of 2020.

The table below compares employment losses across a selection of Adelaide regions, and reveals how geographical factors dictated the extent to which workers were impacted across the metropolitan area.

It shows that the scale of employment losses among Adelaide’s most disadvantaged regions was significantly greater than for Adelaide’s most advantaged, with southern Onkaparinga residents, for example, losing around 2.8 per cent of total jobs in six months, a rate of loss more than triple that of Adelaide and Prospect. 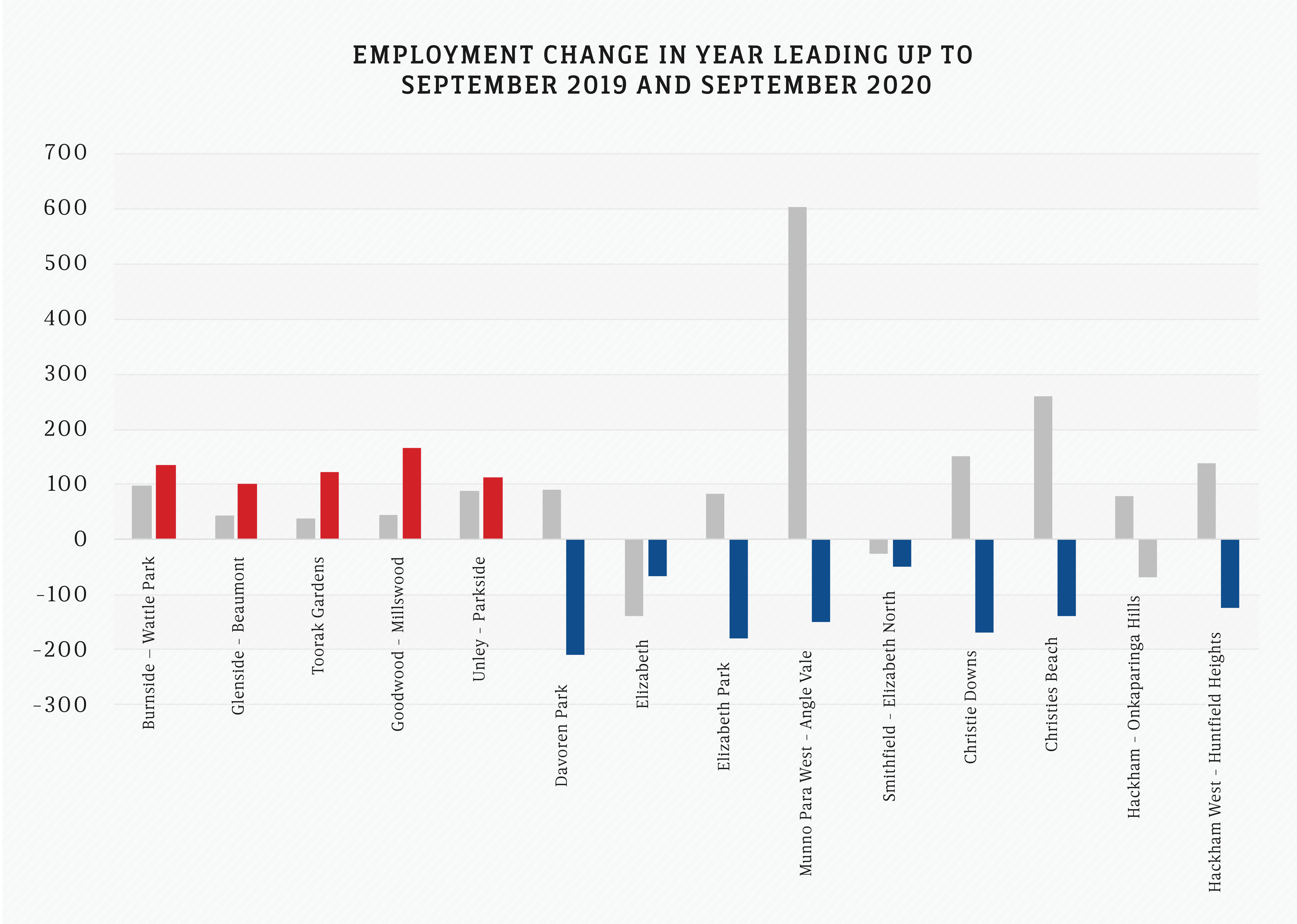 Employment change in year leading up to September 2019 (grey) and September 2020 (red/blue).

Remarkably, the chart shows that the number of employed residents in Adelaide’s wealthiest communities actually grew faster in the year to September 2020 than it did in the previous year. The opposite occurred in Adelaide’s most disadvantaged regions, with a significant decline in number of employed residents in the year to September 2020 the common story.

The following factors help to explain why workers in the most disadvantaged regions tended to pay a disproportionate price than those in wealthier parts of Adelaide.

Ultimately, workers in Adelaide’s most disadvantaged suburbs are more likely to work for relatively low pay in relatively low-skill sectors, have low educational attainment, and be employed on flexible employment arrangements. These factors help to explain why they were hit hardest by the pandemic response.

This analysis relates to data from September 2020, which is the ABS’s most up-to-date Small Area Labour Market data. Certainly, since then, the national economic situation has improved and unemployment has declined substantially as restrictions have eased and economies have sprung back to life.

Between September 2020 and February 2021, more than 400,000 additional jobs have been created across the nation. Unfortunately for South Australia however, this recovery is predominantly an ‘eastern states’ story, with close to 60 per cent of this net job growth occurring in Victoria, and nearly 95 per cent in either New South Wales, Victoria and Queensland. In South Australia, the number of people employed over the period has barely changed.

It is therefore reasonable to conclude that the employment situation as reflected in September 2020 small area data would not have changed substantially between September 2020 and today.

The commonly held view among South Australians in March 2021 is that, to this point, whether through good luck or good management, ‘we dodged a bullet. In terms of the impact of the virus itself, it’s hard to refute this view.

It is important to recognise, however, that the pandemic response has had, and continues to have, a disproportionate impact on those living in the most disadvantaged parts of Adelaide. As the threat of the virus wanes, it is therefore important that we strike an appropriate balance between minimising the likelihood of new COVID outbreaks, and allowing the economy to return to full capacity, thereby permitting workers in our most vulnerable communities to get back to work.

We should also recognise the uncomfortable truth that, in restricting the spread of coronavirus within South Australia, workers in communities that could least afford it have borne the brunt of the economic impact. With the ongoing social impacts of the pandemic response likely to linger in these communities, the rest of the South Australian community owes them our thanks and ongoing support.

James Atkinson is a senior consultant at SGS Economics & Planning