In a statement to InDaily, Member for Adelaide Rachel Sanderson said she had written to Transport Minister Corey Wingard this morning requesting that the $3 million taxpayer grant that was set aside to help the council build an east-west bikeway be reallocated to other transport projects in the city.

She said the State Government would consult the Adelaide City Council about its decision, but did not specify whether the money would be spent on cycling infrastructure.

It comes after the council last night voted against going ahead with its plan to build a $5.8 million east-west bikeway through the city.

The bikeway, proposed to run from West Terrace to Hutt Street via Franklin Street, Gawler Place and Wakefield Street, was knocked back 8-3 by councillors.

Under the funding agreement with the State Government, first negotiated in 2016, the council had to finalise the route by the end of this month and open the completed bikeway by the end of the year.

The council had previously agreed to build the bikeway along Flinders and Franklin Street, but that route attracted significant opposition and legal threats from ratepayers along the route, who were concerned about the loss of car parking and pedestrian safety.

Council compromised in November last year to move the bikeway along Wakefield Street, through Gawler Place and then onto Franklin Street, despite the council’s transport planners preferring the Flinders-Franklin option.

The proposed east-west bikeway route that has now been scrapped by the city council. Image: Adelaide City Council

That route also attracted criticism from businesses and landowners, with lawyer Greg Griffin telling last night’s meeting that the proposal would cost the council between $580,000 to $780,000 a year in lost car parking revenue.

But results from the council’s own public consultation found the majority of respondents supported building a bikeway along the route, with only 30 per cent in opposition.

The proposed bikeway also had broad support from a number of interests groups, including the RAA and Bike Adelaide. 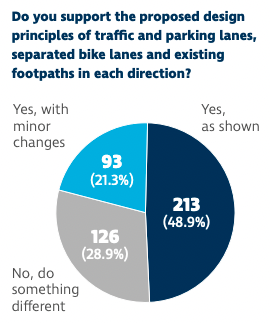 Lord Mayor Sandy Verschoor told InDaily she was “personally disappointed” with the council’s decision to scrap the bikeway, but after speaking to stakeholders along the route, she wasn’t convinced that the proposal would work.

Councillors opposing the bikeway last night argued it would risk pedestrian safety and the council had not spent enough time consulting ratepayers.

“I’m a big supporter of integrated transport and active transport and we are a capital city, so I do see that bikeways and that whole integration of how people move around the city is absolutely the way of the future,” Verschoor said.

“We did have to respond to the feedback and be mindful of the feedback that we were getting and the concerns raised.

“For myself as Lord Mayor I have to be very respectful of the decision the council has made and I do thank the members for their input, and I do mean that sincerely because this has really been a long journey.”

Verschoor said she had previously written to Wingard, who is currently on leave, requesting that the State Government reallocate its $3 million grant to other cycling infrastructure in the CBD in the event that the council was not able to meet its bikeway funding agreement.

“I will be following that up now to see whether we can still make sure that we have good cycling infrastructure within the city,” she said.

“A lot of that is how we link the paths through to the surrounding suburbs.

Asked whether an east-west city bikeway was completely off the cards for the near future, Verschoor said her “crystal ball’s not working today”.

“I can’t answer that at the moment,” she said.

“We will, as a group, of course debrief and see what the immediate next steps are.”

Bike Adelaide chairperson Katie Gilfillan said the council’s decision to scrap the east-west bikeway was “gobsmacking” and city ratepayers needed to be “really concerned about how decisions are made in the council”.

“The City of Adelaide needs to change its brand from ‘designed for life’ to ‘designed for cars’ and stop selling itself as a sustainable, attractive, forward-thinking city,” she said.

“We think that separated bikeways on city streets is the number one high priority for increasing accessibility to the city centre, so we aren’t in favour of the funds being reallocated.

Gilfillan said the funds should be spent on building a cycling bridge across the railway tracks, connecting Linear Park to the Royal Adelaide Hospital.

“But all that is somewhat meaningless if a bike rider cannot safely find their way from the park lands into any of the city businesses,” she said.

Shadow Treasurer Stephen Mullighan, who was Transport Minister when the former State Government entered into the bikeway funding agreement, also expressed disappointment at the council’s decision.

“This was meant to be the second part of a project which saw both a north-south bikeway and an east-west bikeway be delivered,” he said.

“I don’t think the east-west bikeway was any more of a challenge for the council to deliver than the north-south corridor was, but I think what’s changed is there doesn’t seem to be a capacity within the current council to adequately consult and engage with stakeholders along the corridor to listen to them,” he said.

“Certainly the former council, led by the former Lord Mayor Martin Haese, was able to do all of that with the revamp of the north-south corridor and it’s a shame that the current council seems to lack the capacity to engage with impacted people to deliver an outcome.”

Mullighan said the State Government initially funded the project to ensure that the “thousands of people” who ride into the city each day had a safer route.

He expressed concern at the current Government’s move to reallocate the $3 million grant to other transport projects.

“What it sounds like to me is that $3 million won’t be dedicated specifically for cycling projects and instead it will just probably just plug some budget shortfall somewhere else in the transport budget, which I think would be a really poor outcome,” he said. 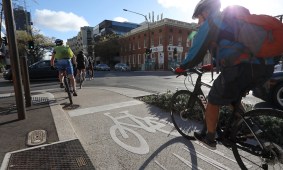 “As we emerge from the coronavirus pandemic, it’s vital we continue to look at ways we can support our city businesses as more people work-from-home – and delivering new and better transport options to the CBD is one way of helping our businesses at this time and in the future,” she said.