The Opposition today established the tone of the campaign by positioning Labor as champions of the green economy – in direct response to the Marshall Government’s move last week to announce a new city basketball and concert arena which would double as an extension of the Convention Centre.

But despite suggesting Marshall’s plan was half-baked, Malinauskas says the location of his own planned power station isn’t yet finalised.

“We haven’t made a final decision but we will be announcing that before the state election,” he told reporters today.

“There are a number of options we have available to us.”

However, he was vague about the direct employment outcomes, beyond an estimated 300 jobs created during the construction phase. 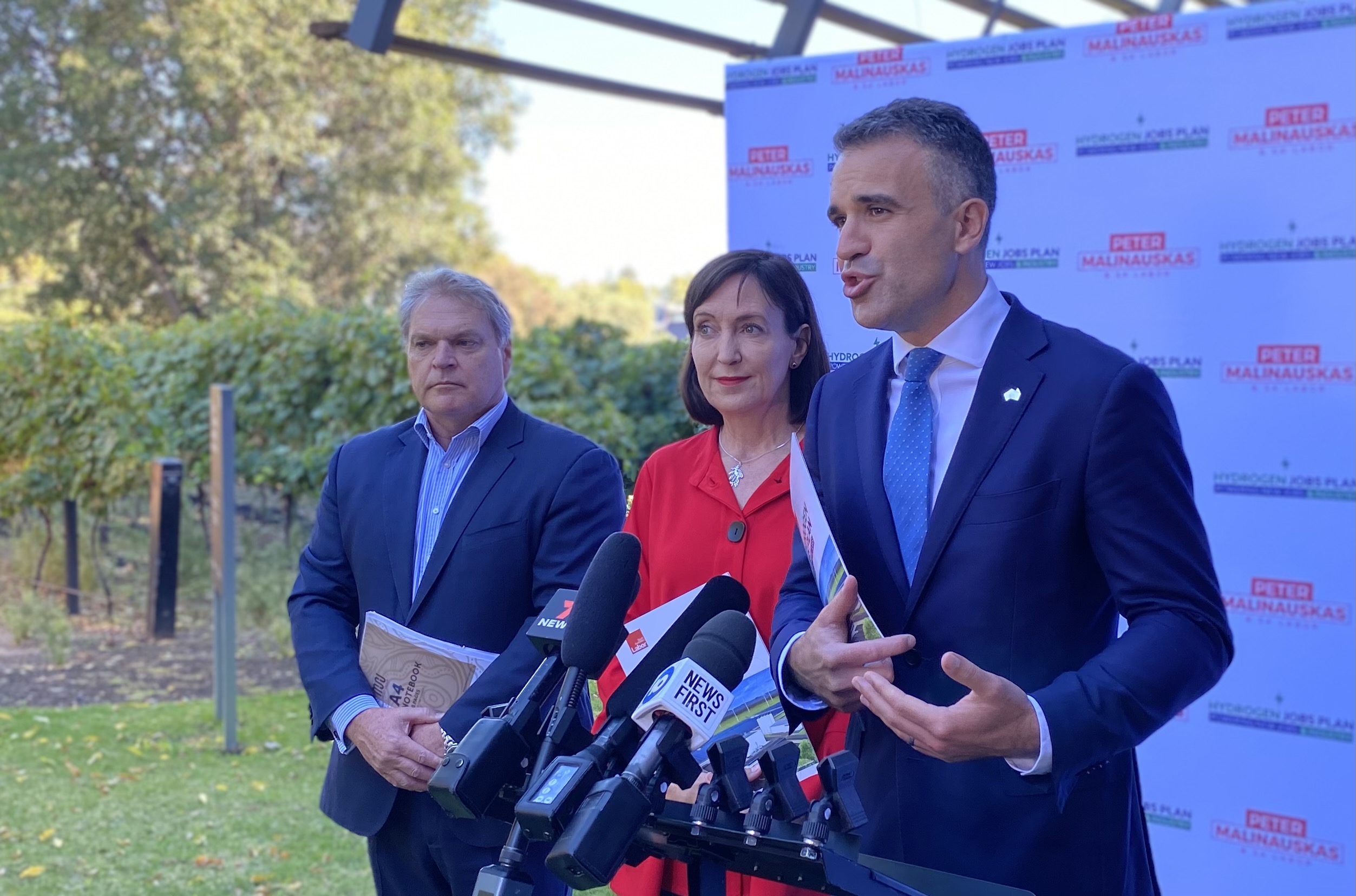 Labor’s estimate of 10,000 FTEs “unlocked” by an estimated $20 billion pipeline of renewable energy projects in SA is predicated on a recent report by consultants EY for WWF Australia [formerly World Wildlife Fund] which estimated that every million dollars spent on renewables generates 4.8 full-time jobs in industry infrastructure and a further 4.95 in energy efficiency.

Labor says its figures are more conservative because it is not assuming the $20 billion worth of prospective projects will all be rolled out.

Asked to specify the nature of the jobs created, Malinauskas said “I refer you back to the EY report [that] every million dollars invested generates 4.8 full-time jobs [in a] whole range of areas associated with the renewable energy industry”.

“These are big numbers and independently verified by Ernst and Young,” he said.

Labor also argues the plan will produce 900 jobs through developing a hydrogen export industry, which Malinauskas explained was predicated on a national prediction of up to 2800 such jobs nationwide.

“We’re putting in place a target to produce one third of them here,” he said.

“We have two choices – either sit back and watch the rest of the world lead when it comes to green energy… or we can put SA at the centre of the next big opportunity globally.”

Price said SA was well positioned to “take advantage of the abundance of renewable energy being produced on a day like this when the rest of the country is covered in cloud and rain”.

“SA has a great advantage in producing renewable energy at very low cost,” he said.

“It soaks up capacity, stabilises the system and it’s an independent source of generation which the state needs – and it’s dispatchable.”

He compared the hydrogen project to the Tesla battery, saying: “This is also a pretty bold plan.”

“That plan transformed the global industry in battery storage, and there’s no reason why this one as well couldn’t be the biggest combination of an electrolyser and generator anywhere in the world,” he said.”

The plant “will be fuelled by hydrogen produced by the electrolysers and the electricity it produces will be used to partner with renewable energy to supply cheaper and more secure power,” Labor’s policy paper states.

Price was dismissive of questions about the location, saying “the nature of these generators is that the costs don’t really vary all that much according to location” and that “land costs are very small”.

“I think the location will depend very much on system conditions at the time [but] the nature of the grid across SA means it can be placed almost anywhere and produce the same benefits,” he said.

“It’s a very small footprint so it’s not a major determinant.”

He said while hydrogen is “not a new technology… what’s transformational is the combination of electrolyser and generator”.

“This is technology for the future, and this is exactly the role government should play,” he said.

Malinauskas was quick to position the plan in contrast to the Liberals’ city stadium – although he hasn’t committed Labor to retaining the Adelaide Entertainment Centre at its current location either.

“We’re not committing to a basketball stadium, what we’re committing to is a brand new hydrogen production facility and generation that will create a whole new industry for jobs around the state – that’s our plan,” he said.

“This is a proper policy that’s about setting up a future industry.

Malinauskas was asked why he was confident in the electoral appeal of his plan, given his former federal leader Bill Shorten made a commitment for a $1.14 billion hydrogen plan in his failed federal election pitch, which was to create just 16,000 jobs.

“This is a fully-costed, well-thought-through, detailed policy that’s all about jobs,” Malinauskas said.

He derided the Marshall stadium as only creating hospitality jobs such as “pouring beers and loading popcorn”.

“It’s almost impossible to form a judgement about Steven Marshall’s basketball stadium because we haven’t seen any detail, so without that work being done it’s very hard to formulate a view on the merits of this proposal,” he said.

But asked whether a similar plan was on Labor’s agenda, he said: “Not at this stage, no.”

Energy Minister Dan van Holst Pellekaan said of Labor’s plan: “You can hear it unravelling in front of your eyes.”

“Look, no mistake here, hydrogen is very positive,” he said.

“We are leading the world with regard to hydrogen, so I welcome the Opposition’s decision to join us in that [and] we have the largest hydrogen electrolyser in South Australia as we speak,” he told ABC radio.

“We’ve got a memorandum of understanding with the port of Rotterdam to export hydrogen to them.

“What this is actually about is the Opposition trying to find some energy policy.”

But that policy was welcomed today by Conservation SA, whose chief executive Craig Wilkins said there was “an exciting opportunity for our state to attract industry and jobs”.

“Using renewable hydrogen alongside batteries is a far better grid stability option than fossil gas,” he said in a statement.

“It’s also a smarter use of hydrogen than pumping it through the domestic gas network.

“Labor’s proposal will reduce the challenge of a peaky generation cycle and help set us up to export hydrogen.”