Transport Department chief executive Tony Braxton-Smith said there were three options being considered – demolishing the building, relocating it, or rebuilding it elsewhere.

Independent engineering firm Mammoth Movers initially quoted around $1 million to shift the 130-year-old gatehouse but Transport and Infrastructure Department officials rejected that, saying they believed the full cost would be more than $3 million.

Braxton-Smith this morning told the Budget and Finance Committee a new quote had been received from Mammoth Movers to relocate the building – putting the full cost at $3.6 million, including all necessary associated works.

Responding to questions from committee chairperson Labor MLC Kyam Maher, Braxton-Smith said another option – to “decommission” the gatehouse and rebuild it elsewhere – would cost about $2.5 million.

Transport Minister Corey Wingard last year backed his department’s initial decision to demolish the gatehouse on the corner of Cross Road and Fullarton Road as part of a $61 million upgrade of the intersection – despite advice that it’s possible to move the building.

That decision prompted a community campaign to save the gatehouse, which sits on the University of Adelaide’s Waite campus and is linked to its Urrbrae House historic precinct.

The university has vowed to fight the land takeover and demolition by pursuing its “legal rights under the compulsory acquisition process” – and is now considering an offer from the State Government to move the building itself, despite describing it as “passing the buck”.

The government has offered the university $2 million it had set aside for state heritage projects – in addition to about $2 million in compensation it will receive through the acquisition process – to move the gatehouse.

Braxton-Smith this morning said “we have continued to explore our options for the relocation of the gatehouse”.

He said the new $3.6 million relocation quote from Mammoth was “substantially more… because the initial quote had a whole number of exclusions attached to it and part of the purpose of us going back to Mammoth Movers was to get a total cost inclusive of all resources and requirements”.

Committee member SA Best MLC Frank Pangallo asked Braxton-Smith when a final decision would be made on the future of the gatehouse because time was “running out” to move the building due to soil concerns during winter.

“I anticipate that the decision is imminent… the negotiations to my knowledge are continuing but I think we are very close,” he said. 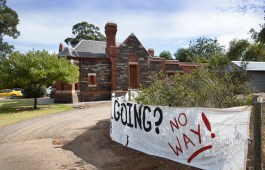 The transport boss said negotiations with the University of Adelaide “have not yet reached a conclusion”.

He said there were “actually three options available” and insisted there was “no preferred” option.

“One is the demolition, which is the original proposal,” he said.

“The second is the relocation of the gatehouse using Mammoth Movers and the third is an option to decommission and rebuild the gatehouse.”

Braxton-Smith said “we are progressing with a party who has recent relevant experience” in rebuilding and an “indicative cost” to do so with the gatehouse was “in the order of $2.5 million”.