Data from the Department of Social Services showed there were a total of 109,285 South Australians on the JobSeeker and Youth Allowance payments as of January.

Low-income recipients are deemed as having “partial capacity to work” if their ability to work for the next two years is less than 30 hours per week, according to the Federal Government’s Social Security Guide.

CYDA’s figures showed the total number of JobSeeker and Youth Allowance recipients with partial capacity to work in 2020 was more than 35,000.

The increase in JobSeeker and Youth Allowance recipients on partial capacity – which were sourced from the Department of Social Service – coincided with a drop in the number of people receiving Disability Support Pension.

While the Morrison government on Tuesday announced a fortnightly $50 increase to the JobSeeker and Youth Allowance payments from April 1, the low-income allowances will remain well below the poverty line of $914 a fortnight for a single adult.

Under the new payment scheme, single Youth Allowance recipients living away from home, with no children, will receive a total $36.60 a day, while the equivalent JobSeeker will receive $43.98 a day.

Welfare payments were temporarily raised in response to widespread unemployment as a result of the coronavirus pandemic last year but have subsequently been wound back and include an additional $150 coronavirus supplement, which is due to be axed next month. Meanwhile the Disability Support Pension has remained at $860.60 for the past 12 months.

CYDA’s report pointed to tightening Disability Support Pension criteria since 2012 as a key reason behind a falling number of recipients.

InDaily has previously reported on the struggles people living with chronic illnesses and disabilities have faced trying to access the pension, with assessment criteria for the DSP tightened over the past decade.

The changes have included assessing claimants on their ability to perform certain tasks, rather than their medical diagnosis, as well as requiring disability pension applicants to participate in an employment support program for at least 18 months with a registered provider.

Over the past decade the rules have also come to include using a government-approved doctor to assess applicants rather than the applicant’s choice of medical professional.

CYDA CEO Mary Sayers said the stringent rules around the pension had pushed more young people living with disability into poverty, when what many required was additional support.

“The eligibility criteria has got stricter and stricter and that forced young people onto youth allowance and JobSeeker … with partial capacity to work,” she said.

“We already know these young people need extra support, so why are we forcing them to live in poverty?”

“In 2011 we had around 20,000 young people aged under 19 on the DSP. That’s dropped by about 5000 young people yet the number of young people on JobSeeker have gone up and Youth Allowance with partial capacity to work.”

She said pushing people living with disability onto the “really meagre” JobSeeker and Youth Allowance payments placed “huge barriers” in their way when they sought to study or find employment. 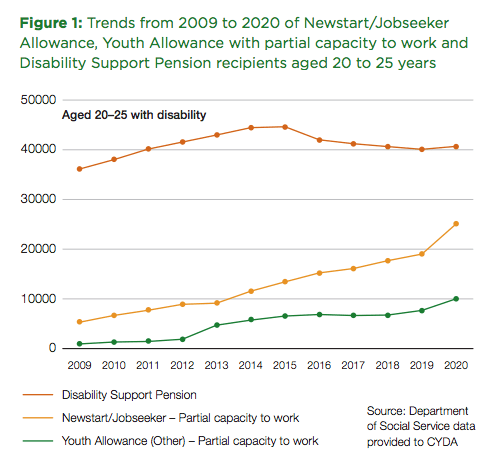 Data from the CYDA pre-budget submission released this week.

CYDA was among welfare advocates and politicians across the country who called on the Federal Government to increase the payment rates. The national disability advocacy group said it would help those living with disability on low-income payments cover living costs.

“We know that young people with disability have difficulty in securing employment, and there’s a number of factors that drive that,” Sayers said.

Figures from the report found students with disability left school before the age of 16 at rates nearly three times higher than their counterparts and were less likely to attain tertiary education.

The report found young people who had gained access to the DSP were “reluctant to obtain paid employment” for fear of losing access to the payment, which was “ultimately their safety net”.

A spokesperson for the organisation said the funding deterrent reinforced the myth that having a disability meant people could not work or contribute to society.

Flinders University student Anu Francis is among the South Australians living with disability on Youth Allowance.

The 25-year-old, who has multiple physical and neurological conditions, uses leg braces to walk and a wheelchair part-time, said she applied for the Disability Support Pension when she started university and was told she was ineligible because she was studying too many hours.

Francis said she was told she would need to reduce the number of classes she studied to get the payment, which would extend the length of time it took her to complete her degree and leave her ineligible for Youth Allowance and without an income until her disability support pension was approved.

“They say you get back-paid, and that’s nice, but if you don’t have the money to support you … while all of this goes on then there’s not much that you can do,” she said.

“I’ve had to be on Youth Allowance for so long because of my disability, which is never taken into account … People with disabilities are quite often at university for longer because they have to change courses or go part-time because they aren’t well enough to study.

“It’s really hard thinking about even when I graduate and start working I will probably never be able to work full-time, because I have so many medical appointments. I had an appointment last week and I was told that I’m doing too much and I should be allowing myself time to rest.

“But I think like a big part of that is that I have to keep going because right now I can’t go to part-time study, otherwise I won’t have any income, and if I start working part-time and am not on the DSP for any reason then I’m going to be on half the wage … which is a big problem for people with disabilities.”

She said currently said the majority of her Youth Allowance went to covering her living expenses.