Potter went public in the Sydney Morning Herald in July 2019 with an allegation she was sexually assaulted by a Liberal colleague, who was reported at the time to “strongly deny” the allegation.

In InDaily today, she writes that she approached her former boss Birmingham, in whose office she had worked at the time of the alleged assault, in the days before the article was published.

“I felt it was important that he knew why I was speaking out years later… I wanted him to understand the processes – along with the culture I experienced – that discouraged disclosure or complaints,” she writes.

“Moreover, I needed him to hear what happened to me, as an employer, party powerbroker and my friend.”

She said Birmingham declined to meet with her, despite having been made aware of her allegations.

He told InDaily in a statement that “Ms Potter contacted me via text message saying: ‘Hi Simon, I meant to text earlier but if you’re around Adelaide this weekend, it would be great to grab a quick beer. I know how insanely busy you are so I completely understand if you can’t. It’d be good to catch up. Cheers, Chels’

“I responded to Ms Potter on the same day stating: ‘Thanks Chels. Unfortunately I am not in a position to catch up this weekend. I understand you have made some serious allegations to media about an incident that you claim occurred during your time working in my office. I encourage you to talk to professionals about such matters and suggest that the Women’s Information Service (https://officeforwomen.sa.gov.au/womens-information-service) or 1800Respect (https://www.1800respect.org.au) may be appropriate options.’”

Birmingham said that “at no other point has Ms Potter raised these claims with me or anyone else in my office, or sought to discuss them with me”.

“Sexual harassment or assault of any kind are completely unacceptable in all circumstances,” he said.

“I encourage past and present parliamentary staff to participate in the multi-party, independent review that is being established to achieve fundamental change on these matters.”

In Potter’s InDaily article, she writes that since that exchange, and after the publication of her allegation, she was “yet to receive a call” from her former boss.

“We haven’t spoken about it at all,” she said.

Today, Birmingham said: “I will be getting in touch with Ms Potter to discuss the establishment of the review and to encourage her to engage with it.”

“The allegations made by Ms Potter that were first reported on the Sydney Morning Herald website on Monday 29 July 2019 are serious and are deeply distressing,” he said.

“I was first made aware of these serious claims when my office was contacted by a journalist in the week prior to the article being published.

“The Sydney Morning Herald story made clear that the alleged incident had never been raised with me by Ms Potter.

“The 2019 article related to an alleged event in 2015. By 2019 neither of the individuals involved were employed by me or any other Member of Parliament.”

On July 31 2019, Birmingham was asked about the allegation, and another by an unrelated complainant in the same article, in an interview on ABC Radio Adelaide.

At the time, he said the allegations were “all news to me”, and did not disclose that one of the complainants was a former member of his staff.

“It came as a surprise when I heard that journalists were asking about it in the last couple of days,” he said at the time.

“What I would say to anybody, whether they work in government or elsewhere is… you know, obviously these allegations themselves are deeply concerning and distressing but anybody in those sorts of circumstances should use the type of proper processes that are available to them.

“If they need additional assistance, they should reach out to government-funded organisations like 1800RESPECT or the Women’s Information Service in South Australia.

“In terms of dealing in the workplace, they should use, again, the processes that are there, raise it with their employer.

“I do note, in this story, that in both cases the individuals state they did not raise it with the Member of Parliament they were employed by.

“They should raise it with their employer.”

He said there were “very clear processes” within the Department of Finance, which he now oversees, for federal staff to “seek advice, request counselling, lodge a complaint [or] request a formal investigation… so we do have quite clear processes that are in place and I would urge anybody in any of these circumstances to reach out and to use those processes”.

In the wake of a rape allegation last week by Brittany Higgins, a former staffer to defence industry minister Linda Reynolds, Birmingham was appointed by Prime Minister Scott Morrison to “work with all political parties and independents across the parliament to establish an independent multi-party review into the way in which workplace matters are managed around parliamentary staff, how we can provide for a culture in an environment that reduces and minimises the risk of such terrible sexual assaults or any other harassment or wrongdoing occurring”.

Birmingham told ABC radio this morning: “We are clearly admitting the inadequacy of what is there.”

“That is why this process is being undertaken, because the stories told by Brittany Higgins and by others over the last couple of years are a clear demonstration of the fact that too many people don’t feel that they can go through with police complaints,” he said.

Asked this morning whether there had ever been a similar complaint of assault or harassment in his own office, Birmingham replied: “Never that has been brought to me, but I am aware of a former staff member of mine who has, subsequent to leaving my office, raised allegations.”

“The issue was never brought to me or my office – it was taken to the media some time after [Ms Potter] had ceased employment in my office,” he said.

“I think we can all learn how to try to create an environment for better support.”

He said if a staff member came to him with similar allegations today, he would “try to bring the police in and urge those discussions” and “encourage the individual involved to seek independent counselling, support services and advice there so that they can be supported”.

“And I would give them my absolute commitment in undertaking that they had my full support, that their job was secure, and that I backed all of the decisions that they would make in relation to pursuing such a horrific instance through the appropriate channels with police while also getting all of the emotional support that clearly anybody in those circumstances needs,” he said.

Asked if he felt his office dealt with Potter’s claim using “best practice”, he said: “Look, I don’t know… I think we can all learn how to provide even better support and assistance on these things – and that is why we’re having an independent review.”

After a second woman came forward over the weekend, a third has told The Australian she was assaulted while working as a coalition volunteer during the 2016 election campaign.

She was barely out of school at the time of the alleged attack, which she said occurred after a night out drinking with the then-political staffer.

The woman alleges the former Liberal Party staffer reached under the table to stroke her thigh at a Canberra bar in 2017.

She has filed a report at a police station in Canberra and will make a formal statement later this week. 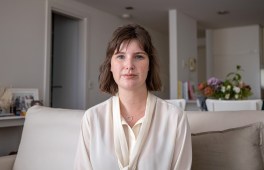 The woman came forward to the ABC after Brittany Higgins last week alleged she was raped by the man in 2019.

The allegations come as Higgins, who says she was raped inside a parliamentary office in 2019, prepares to make a statement to Australian Federal Police.