PM gets his COVID-19 vaccination shot

Scott Morrison has become one of the first people in Australia to get a COVID-19 vaccination.

“I’m ready to go, just like the country,” Mr Morrison said from behind his Australia flag face mask at a Sydney medical centre on Sunday.

“It is about confidence,” Health Minister Greg Hunt told ABC’s Insiders program on Sunday on Mr Morrison getting the jab at the start of the national rollout.

“Research shows that people want to see that if we believe it’s safe, then that will give them greater confidence.”

Mr Hunt confirmed that he and the head of the Department of Health and former chief medical officer Brendan Murphy will get the alternative AstraZeneca jab at a later date.

He wants as many as people as possible to be vaccinated, but declined to put a figure on what percentage he wanted to see.

“We’ve provisioned so that … every Australian has access to vaccines. We’ve secured 150 million doses of a range of vaccines,” he said.

According to an Australian Bureau of Statistics survey, men (76 per cent) are more likely than women (71 per cent) to agree or strongly agree with getting the jab.

The initial batch of 4000 Pfizer doses are set to arrive in Adelaide via Sydney today.

SA Health will prioritise high-risk frontline staff to get the first jabs.

Lyell McEwin Hospital meanwhile is set to be the third Adelaide hospital to serve as as a vaccine hub in two weeks.

The Royal Adelaide Hospital and Flinders Medical Centre are the other two initial hubs.

Another six hubs will open in time.

South Australia recorded two new cases of COVID-19 on Sunday, both among returned travellers in hotel quarantine where they have been since their arrival.

The skyrocketing price of Bitcoin has spurred an uptick in cryptocurrency investment among Australians looking for a financial safe haven and hedge against inflation, analysts say.

Driven by investors seeking returns amid low interest rates and a weakening US dollar, cryptocurrency speculation has boomed since the start of the COVID-19 pandemic.

The value of Bitcoin has tripled since November, the start of its most recent rally, and lifted more than eightfold since March 2020. It now has a market capitalisation of more than $US1 trillion.

It comes after finder.com.au data this month showed a quarter of Australians either own or plan to own cryptocurrency by the end of 2021, primarily as a means by which to achieve capital growth.

Millennials were 11 times more likely than baby boomers to own or plan to own cryptocurrency in 2021, finder.com.au also found.

Curtin University finance lecturer Vincent Chang told AAP the rise in the value of Bitcoin was reminiscent of the late-1990s dot-com boom, with uninformed investors “following the herd” amid the promise of massive capital growth.

That boom ultimately resulted in a crash, and people losing their investments.

Hundreds of people protested in Adelaide on Saturday against COVID-19 vaccines, ahead of the national rollout beginning on Monday.

Protesters marched from Victoria Square to Parliament House as part of a coordinated series of protests across the nation.

People held signs claiming that COVID-19 is a global conspiracy and warning against mandatory vaccines.

South Australia’s vaccine program is not mandatory, and the federal government has repeatedly said it will not force people to get vaccinated.

However high risk locations such as aged care facilities may be able to compel employees to get the jab and individual businesses and venues may make vaccination a condition of entry.

The Therapeutic Goods Administration (TGA) has approved the Pfizer and the Oxford University-AstraZeneca vaccines as safe for use in Australia.

The Adelaide protesters also signed petitions on the steps of South Australia’s Parliament, where speakers urged anti-vaxxers to join major political parties and influence their direction from the inside.

Simultaneous protests were held in all major cities, as well as regional centres including Cairns, Coffs Harbour and Albany.

Hundreds of people gathered in Melbourne’s Fawkner Park on Saturday with 20 arrests made, Victoria Police said.

A Herald Sun reporter and photographer were among those arrested by police.

Fifteen of the arrestees will receive fines in relation to breaching directions issued by the state’s chief health officer, while five have been charged for resisting arrest, hindering police and refusing to provide details.

Victorian police used pepper spray on some protesters when they moved beyond cordons and at times, appeared to lose control of the crowd, an AAP photographer on scene said.

While some people were covered in pepper spray, crowds chanted, “freedom, freedom”.

Speakers made comments such as “God’s on our side” and “it’s a fight between good and evil”.

At Sydney’s Hyde Park, controversial celebrity chef and conspiracy theorist Pete Evans was among the hundreds of protesters.

Evans, who has recently been banned from social media, addressed the crowd in Sydney.

Protesters marched with placards with slogans such as “herd immunity of vaccines is a scam” and “your body, your choice”.

Countdown on for national vaccine roll out

Preparations are being finalised for Australia’s largest ever vaccination program, with Victoria successfully emerging from lockdown to meet Monday’s deadline and hoping again for no new virus cases.

The nation recorded zero locally acquired COVID-19 infections on Saturday, with Victorian Health Minister Martin Foley still cautious but willing to say things were “increasingly under control” on his patch.

“We are still approaching (the Holiday Inn) outbreak with the utmost vigilance and caution and we are still prepared for the possibility of more locally-acquired cases,” he said.

However a further easing of restrictions next Friday is likely, with just 25 active cases in the state and one person in hospital.

In the meantime, border and quarantine staff, vaccination teams, aged care residents and workers, and emergency and intensive care workers will be among the first to receive the free Pfizer jab from Monday.

Two doses are required at least three weeks apart and the vaccine must be stored and transported at -70C.

A flying squad of 500 nurse immunisers will be dispatched around the nation to vaccinate aged care and disability residents.

Prime Minister Scott Morrison says federal and state health officers are monitoring whether to make shots compulsory for some workers.

Ellis’ resigned from the Liberal Party on Friday as he fights 23 fraud charges related to his country MP travel claims.

Maher, who opposes the Aboriginal Lands Parliamentary Standing Committee for singling out Indigenous organisations, called on the Marshall Government to remove Ellis from the investigation.

“Someone facing 23 charges before the courts cannot sit on a committee that the Premier has charged with looking into corruption,” he said.

A spokesperson for the State Government told the ABC it was up to Parliament not the Premier to determine the membership of parliamentary committees.

The resignation of Ellis means the Marshall government now holds only 23 seats in the 47 seat parliament, less than the 24 seats required for a majority.

The prime minister’s office continues to investigate a Parliament House rape claim as reports surface of a second allegation involving the same man.

The woman argued that if the government had adequately dealt with the incident involving Ms Higgins in 2019, she would not have become a victim in late 2020.

Mr Morrison said he perceived broader problems with the “workplace culture” in Parliament House, which needed to improve.

Ms Higgins is proceeding with a formal complaint to federal police over the alleged rape in early 2019 inside the office of now-Defence Minister Linda Reynolds.

Despite questions about Senator Reynolds’ handling of the complaint, the prime minister said she has his confidence to remain in Cabinet.

Mr Morrison claims his office did not find out about the initial incident at Parliament House until last week and he was not informed until Monday.

But a text message exchange between Ms Higgins and a fellow Liberal staffer within a fortnight of the incident called into question the account.

Mr Morrison’s former chief of staff, the current Department of Prime Minister and Cabinet secretary Phil Gaetjens, has been tasked with leading a review into departmental communications.

The United States has officially re-entered the Paris climate agreement, with US President Joe Biden describing climate change as a “global existential crisis”.

It is nearly one month after Biden took office and pledged to re-enter the deal in one of his first moves as president.

Former president Donald Trump took the US out of the accord in 2017, arguing that it put too many limits on what US businesses could do.

Still, the Paris agreement’s long lag time meant that the US did not formally exit the deal until November 2020.

The US is the only country out of the 196 signatories to have left the agreement.

UN Secretary-General Guterres welcomed the return of the United States as restoring the “missing link that weakened the whole” but warned “this is the race of our lifetimes”.

Protesters took to the streets in several Myanmar cities and towns on Saturday with members of ethnic minorities, poets and transport workers among those demanding an end to military rule and the release of elected leader Aung San Suu Kyi and others.

“Twenty people were injured and two are dead,” said Ko Aung, a leader of the Parahita Darhi volunteer emergency service agency in the city.

Some protesters fired catapults at police in Mandalay who responded with tear gas and gun fire, although it was initially not clear if they were using live ammunition or rubber bullets.

One man died from a head wound, media workers including Lin Khaing, an assistant editor with the Voice of Myanmar media outlet in the city, and a Mandalay emergency service said. 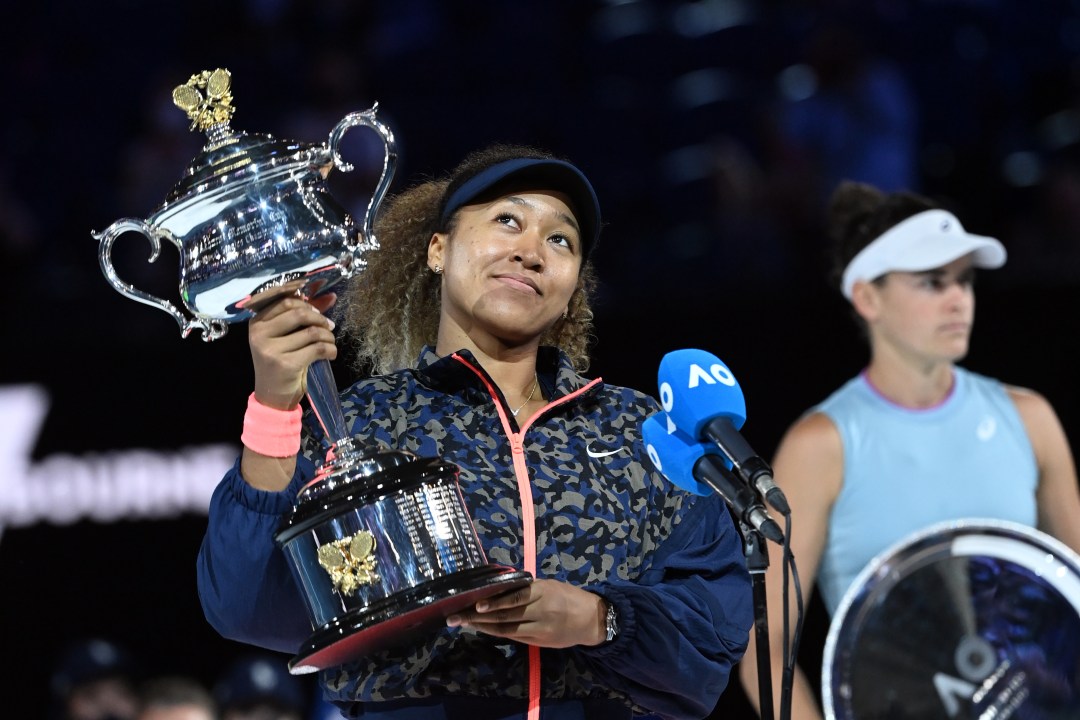 Naomi Osaka of Japan holds the trophy after winning the Australian Open women’s final against Jennifer Brady of the United States in Melbourne. Image: AAP/Dave Hunt

The Japanese superstar crushed American Jennifer Brady 6-4 6-3 in 77 minutes on Saturday night to become the first woman since Monica Seles 30 years ago to win her first four grand slam finals.

The world No.3 made a blazing start to the final, opening the match with an ace, holding serve to love and applying immediate pressure on Brady’s.

Despite dropping serve at 4-0 in the second set, Osaka was never really threatened and clinched the title on her first match point.

Daniil Medvedev will take on Novak Djokovic in the men’s final tonight.

Aussie trio get wildcards into Adelaide

They join world No.1 Ash Barty, who will defend her title, with play getting underway Monday at Memorial Drive Tennis Centre.

Veteran Stosur will travel to Adelaide after playing in the Australian Open mixed doubles final with compatriot Matt Ebden.

Tomljanovic enters the tournament in impressive form having stretched world No.2 Simona Halep to three sets in their second round match at Melbourne Park.

Gadecki, 18, made her WTA main draw debut at last month’s Gippsland Trophy in Melbourne and enjoyed a maiden win against world No.4 Sofia Kenin.