The US-based social media colossus released a statement this morning saying that “with a heavy heart” it was restricting publishers and users in Australia sharing or viewing Australian and international news content, as a response to the federal government’s proposed legislation to force it to pay Australian publishers for news.

“It has left us facing a stark choice: attempt to comply with a law that ignores the realities of this relationship, or stop allowing news content on our services in Australia. With a heavy heart, we are choosing the latter.”

Before 9am, the Facebook pages of news websites around Australia – including national and emergency broadcaster the ABC, television, radio and print networks and Solstice Media publications InDaily and SALIFE – went black and inactive.

But in wiping the pages of news outlets, Facebook also shut down essential public health and emergency organisations.

SA Health – which has more than 305,000 followers on Facebook – this morning responded to the move with a statement saying it had been “caught up in the Facebook restrictions that have come into place overnight for Australian news outlets”. 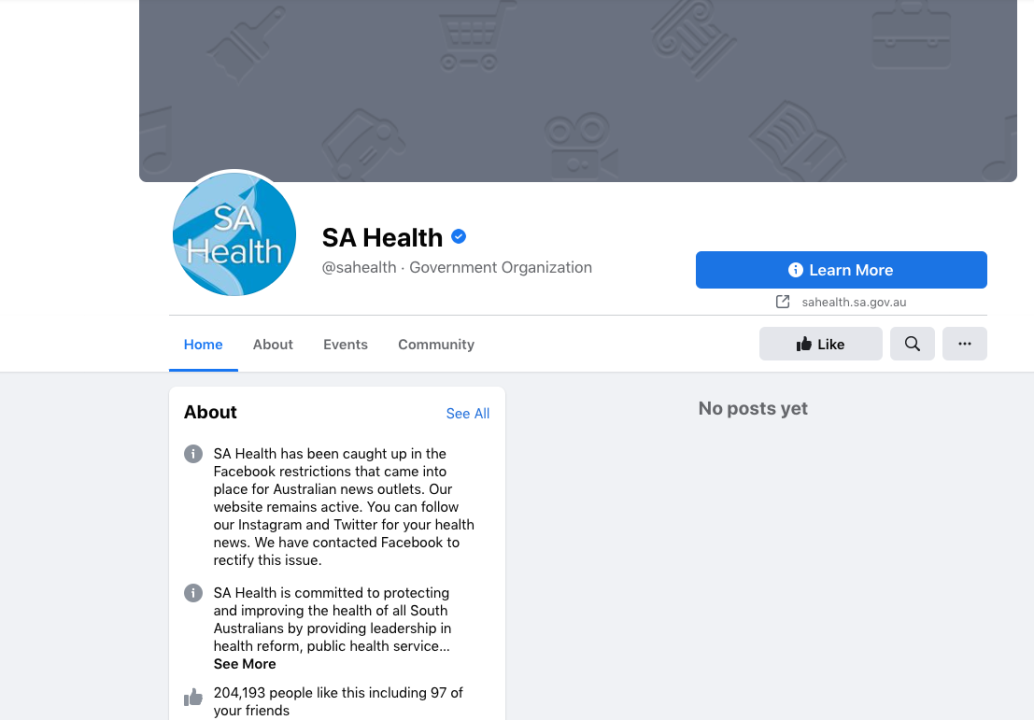 SA Health Minister Stephen Wade had previously condemned the move by the tech giant: “To restrict the dissemination of important public health information during a global pandemic is absolutely unacceptable,” he tweeted.

He later tweeted: “I’m relieved common sense has prevailed and has restored the @SAHealth Facebook page following its reckless censorship this morning.”

Facebook released a later statement saying: “As the law does not provide clear guidance on the definition of news content, we have taken a broad definition in order to respect the law as drafted. However, we will reverse any Pages that are inadvertently impacted.”

“The fact that these restrictions are impacting important Government pages, that broadcast public safety messages or are used to assist South Australian to protect themselves in an emergency is totally unacceptable,” he said.

“I request that you immediately take action to rectify this situation and ensure that restrictions are removed from Government pages used to broadcast vital public safety information.”

“This corporate bully-boy tactics could cost lives,” he said.

The Queensland Government’s main health page was also wiped, with the Health Minister angrily tweeting that the decision was “nuts” during a pandemic.

SA Power Networks corporate affairs manager Paul Roberts said the state’s major electricity distributor had no warning that a main communications channel to customers about supply and safety had been cut.

“Facebook is one of the channels we use actively to keep in touch with our customers and community and we are surprised our pages have been wiped by Facebook,” he said in a statement.

“We did not receive any notification from Facebook for this unilateral action and are disappointed that, as an essential service provider, we have been caught up in a dispute over media rights.

“We will continue to provide information to customers via our SMS system, other social media (ie Twitter) and website and hope that Facebook will move quickly to restore our pages and those of other important organisations serving our community.”

ABC News Managing Director David Anderson said in a statement that despite the ongoing impact of the coronavirus pandemic on Australians, Facebook had “removed important and credible news and information sources from it Australian platform”.

He said ABC’s digital news service would “always remain free and accessible to all Australians on the ABC website and via the ABC News app, providing independent and reliable news, information and analysis.” 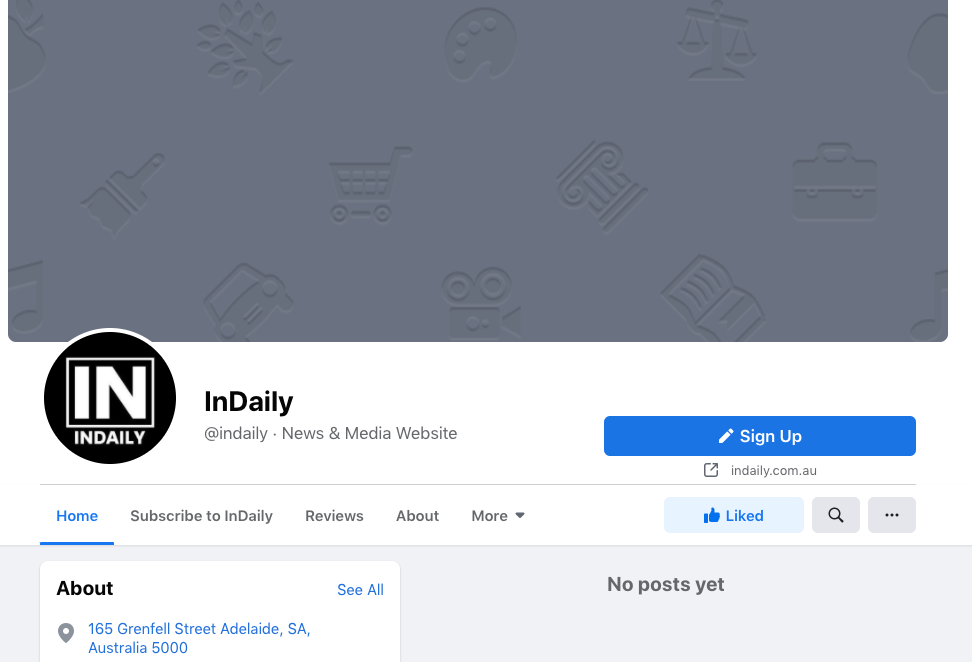 InDaily’s Facebook page is among the nation’s blank pages.

The tech heavyweight released a further statement this morning that said government pages “should not be impacted” but added that it had taken a “broad definition” of news content because “the law does not provide clear guidance”.

It said it would reverse any pages that had been “inadvertently impacted”.

A State Government spokesperson said that Facebook pages for SA Police, Country Fire Service, Metropolitan Fire Service and Premier Steven Marshall were still functioning this morning, the government had “no control over what Facebook deems a news organisation and what they don’t”.

“If people are finding it hard to access information on Facebook, please look straight to the (government) websites,” the spokesperson said.

“It’s ultimately a matter for the Federal Government and we understand they are in talks with Facebook.”

A SAPOL spokesperson told InDaily they’d been advised by Facebook that their page would not be impacted, while the CFS said it was monitoring the situation on a day forecast at more than 30 degrees.

Western Australia’s Fire and Emergency Services Facebook page was blacked out, on a day of high temperatures and fire danger.

“The SA CFS is yet to fully understand whether there’ll be any implications on our ability to share information, in light of Facebook’s block on news sites,” the CFS said in a statement.

“As always, we encourage the community to ensure they are accessing multiple sources for information in the event of a fire and on days of dangerous fire weather.” 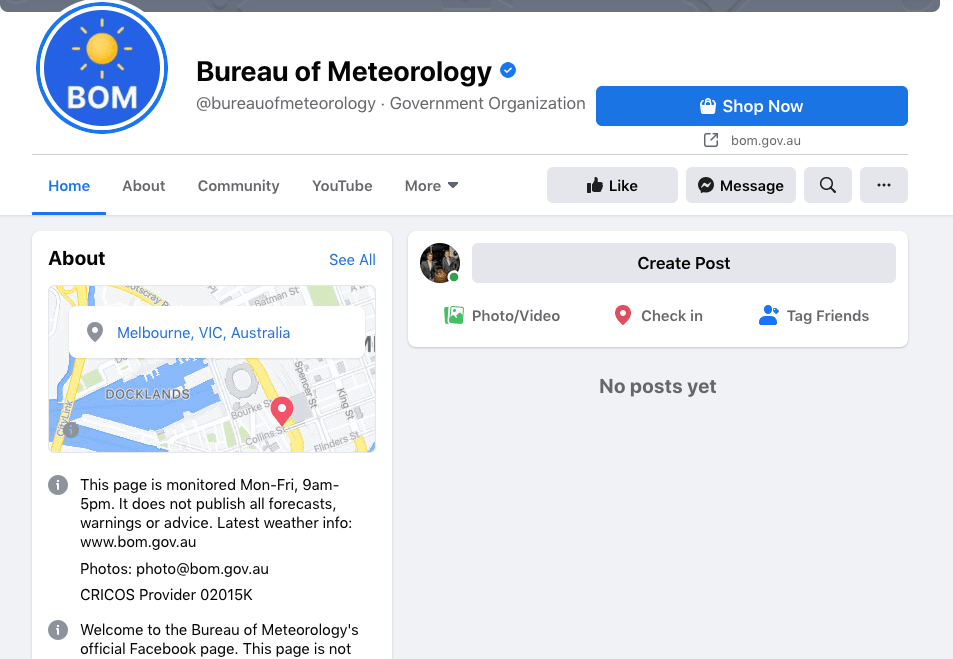 The uncertainty comes as Adelaide swelters through a 38-degree day with very high fire danger ratings in place across the state.

In WA, the fire and emergency services page is down despite an extreme fire warning being in place for the Goldfields, Eucla and inland parts of the Gascoyne region in the state’s east.

The Bureau of Meteorology’s page, followed by more than 910,000 people, is also offline, despite the agency today issuing flood warnings across Queensland and WA.

“This is an alarming and dangerous turn of events. Cutting off access to vital information to an entire country in the dead of the night is unconscionable.

“(Facebook co-founder and chairman) Mark Zuckerberg has publicly stated that he doesn’t think it’s right for a private company to censor the news and Human Rights Watch agrees.”

“The decision they’re taking it would seem that what they want to do is remove authoritative and credible news sources from the platform,” he told 2GB radio this morning.

“It also goes to the central issue that has underpinned why we have been developing this news media bargaining code, which is the competition policy issue going to the market power of Facebook and Google.

The Guardian reported Treasurer Josh Frydenberg said Facebook’s actions were “wrong” and “unnecessary” and that the “heavy-handed” move would “damage its reputation here in Australia”.

“Their decision to block Australians’ access to government sites – be they about support through the pandemic, mental health, emergency services, the Bureau of Meteorology – were completely unrelated to the media code which is yet to pass through the Senate,” he said.

“But what today’s events do confirm for all Australians is the immense market power of these media digital giants. These digital giants loom very, very large in our economy and on the digital landscape. The Morrison government remains absolutely committed to legislating and implementing the code.”

“On a day of flood and fire warnings in Queensland and WA, Australians can’t access the Bureau of Meteorology on Facebook.”