In an interview with InDaily, chief public health officer Nicola Spurrier said her team at SA Health’s communicable disease control branch would not have direct oversight of the vaccine rollout, with responsibility falling to a specialised unit managed by the department’s deputy chief executive Don Frater.

Frater, a former chief of staff to Rann Government minister Patrick Conlon, who later worked for senator Penny Wong before a series of senior public service roles, detailed the timeline for SA’s vaccination program in a briefing paper dated January 18.

It detailed the SA Government’s roles and responsibilities as securing an “appropriate qualified and trained workforce”, determining vaccination sites and locations, “real-time reporting to the Commonwealth”, local-level communications, provision of “clinical safety and quality” and the “operational implementation of the vaccine rollout to the SA community”.

The first stage of SA’s rollout will begin next week, with Premier Steven Marshall yesterday declaring the first jabs could be administered “possibly as early as Monday”.

He said 1726 frontline workers on the international arrival “pathway” from Adelaide Airport to SA’s medi-hotel network – including airport staff, health workers, security staff and SAPOL officers – would be administered their initial dose within the first week, with the rollout to step up to 12,000 vaccinations within three weeks.

Around 4000 doses will arrive in SA this weekend, ahead of the local component of what Marshall – citing federal Health department boss Dr Brendan Murphy – dubbed Australia’s “largest peacetime logistical exercise”.

Frater’s briefing details “phase 1a” as the rollout of the Pfizer vaccine, ahead of next month’s “phase 1b” rollout of the vaccine from AstraZeneca, which was this week given provisional approval by the Therapeutic Goods Administration.

The final phase will be the broad rollout of the Novavax vaccine from September, subject to successful trials and approvals.

Frater’s briefing paper says phase 1b of the rollout in March will target the APY Lands, remaining healthcare settings and “other essential services personnel [particularly] in settings with higher risks of transmission”.

That phase will also deliver the vaccine to “older people, over 60 years,” Aboriginal and Torres Strait Islander people more generally and adults under 60 with underlying medical conditions.

In May, phase Phase 2a will target the general population, as will 2b in July, the briefing paper details.

Phase 3 follows in September, completing the general population rollout along with “regional responsibilities and key partners” and “consideration of school-based programs if clinical data supports utilisation”.

Frater noted “the location of vaccination clinics needs to support equity of access for the community”, with two to three clinics to be allocated for each local health network, along with “sites in every region with [and] existing health presence”.

His presentation said there was the “potential” to utilise mobile clinics for “vulnerable populations”.

“Success of the COVID-19 Vaccination Program is reliant on [a] qualified, vaccination-trained agile workforce, a comprehensive communication and engagement strategy [and] digital infrastructure to support track-and-trace of doses,” his briefing states.

Spurrier said the doses would be “divided equally between all states and jurisdictions based on our population size”.

She expected the rollout to be carried out by year’s end, but remains unsure to what degree it will change health authorities’ responses to viral outbreaks, with rolling border restrictions and intermittent lockdowns around Australia in recent months.

“I think we can be more nuanced with that, because the more people who are vaccinated, we know the fewer people who will get severe disease,” she said.

“It would be very hard to completely eliminate COVID, but the more people we can get vaccinated, the closer we can come to being back to normal.”

Spurrier said “the people who are most at risk get the vaccine first”, including those “most at risk of getting severe disease from COVID, such as the elderly and people with chronic illnesses”.

But the first in the queue will be “anyone in that quarantine medi-hotel pathway, because that’s where the disease is in Australia”.

“Once we have international arrivals put their feet on the tarmac, any South Australian who’s working to get that person up into the medi-hotel – security, ADF, SAPOL, Health… all the staff involved – they’re at the highest risk in our community of getting COVID, so they’ll be the first off the rank to get the vaccine,” she said.

Explaining the process beyond that, she said there would be a “pre-registration process” – a “booking system” which will help authorities record “who’s got the vaccine and a way of reporting any side effects”.

“It’s a huge amount of logistics… a lot of this has to be done very quicky,” she said.

“Right now, we’re focusing on the first part of the rollout – our medi-hotel workers, people in aged care and our frontline health staff… that’s the bit that’s right up the top of our heads at the moment.

“But when the vaccine’s ready for the next group of people, we’ll have quite substantial communication to people – so people don’t need to start worrying, ‘should I be going to my doctor, should I be doing something’… we’ll make sure people know where they can access the vaccine.”

She said there would be dedicated vaccination clinics and “various hubs” established, but people will be able to visit GPs as well.

“It’s much more efficient to vaccinate a large number of people using a hub model, but GPs are also where people like to get vaccinations, so the Commonwealth Government have put in a process to bring general practices on line,” she said. 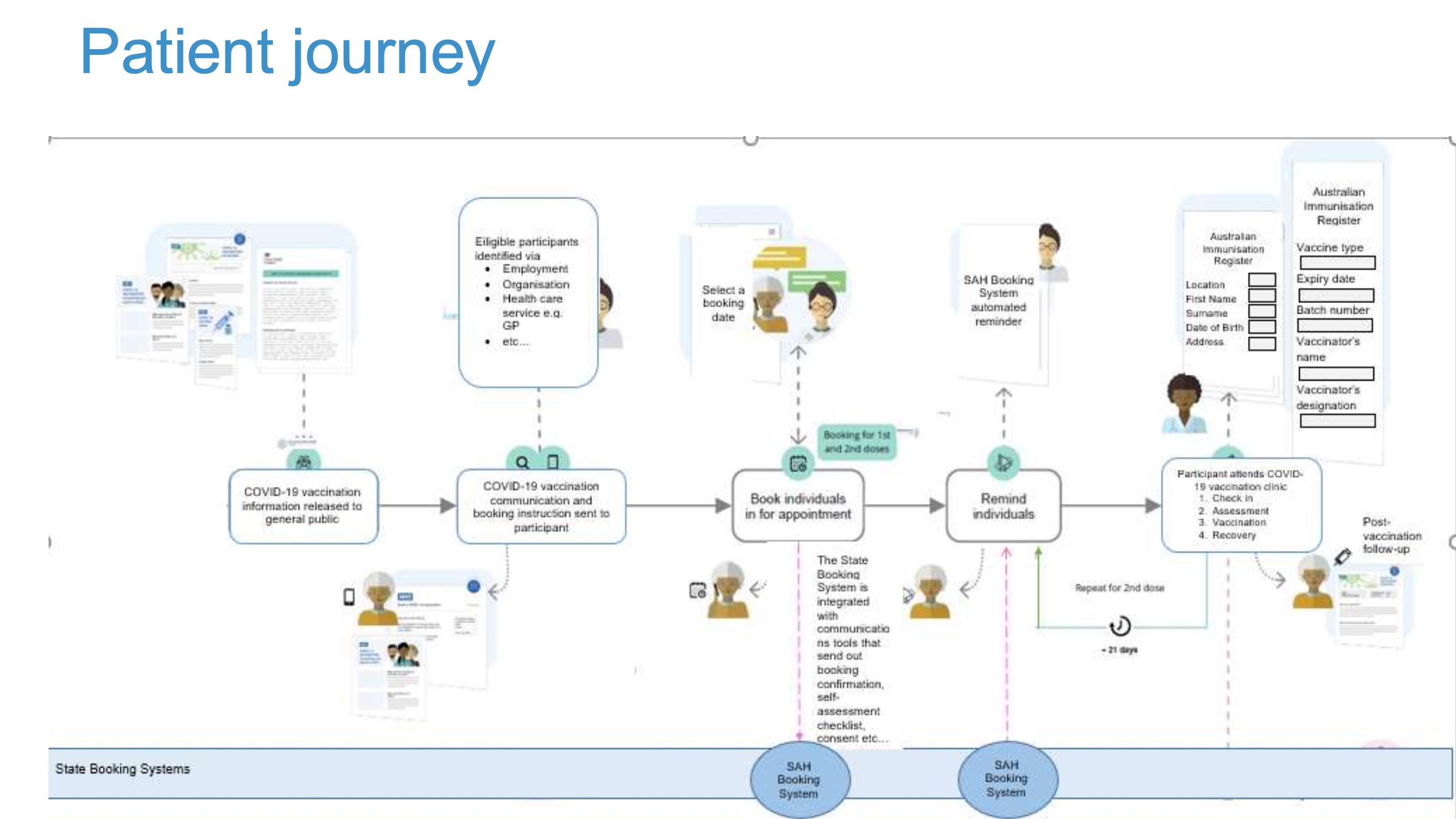 The rollout’s specific timing was “dependent on when we get the vaccines from the Commonwealth… but we’re very lucky with AstraZeneca that we have production in Australia [and now] TGA approval”.

Each vaccine will require two doses, with four weeks between jabs for the Pfizer vaccine and 12 weeks for AstraZeneca.

Spurrier acknowledged there would be a mix of apprehension and outright anti-vaccination sentiment in some quarters, warning people inclined to ‘wait and see’ that this would prolong pandemic conditions.

“I think generally when you’ve got something like a vaccine, you expect not everybody’s going to say yes – but there’s also a group that just want to see other people have it first, and if all’s going well then they might [have it] as well,” she said.

“But the most important thing for South Australians and Australians to take into account is that the more people we can have vaccinated, the quicker we can get on top of this pandemic…

“If we have a poor vaccine uptake, it means it’s going to drag on a lot longer.”

She also emphasised, “we’re one of the last countries to be vaccinating”.

“There’s many countries that have already started their vaccine program, so millions of people have already received the vaccine… so people who are thinking ‘I’ll wait a couple of months until more people in Australia have had it’ – just think there’s a large number of people elsewhere in the world who have had it already.”

However, she noted it was not yet clear to what extent widespread vaccination would stop the spread of the virus – as opposed to merely the severity of its effects.

“There’s some question at the moment – it’s basically because we don’t have the information yet about how much the vaccine stops it being transmitted from one person to the next,” she said.

“It would be reasonable to expect it would reduce transmission [but] we just don’t know how much that would be by.”

Nonetheless, she reinforced that with “higher rates of vaccine coverage, we can protect all of us”.

As for international travel, she said that would “depend on how much disease is elsewhere in the world”.

“We should start to see a decline in the disease rates – and there’s been a drop in COVID numbers internationally [already]… it’s likely to be because of more strenuous public health efforts [and] not the vaccine, but we are seeing a drop in numbers, which is good,” she said.