The review, led by former District Court Judge Paul Rice and made public in a redacted form today, found that child sexual abuse was not seen by Child Protection Department staff as a “sufficiently serious crime” about which Child Protection Minister Rachel Sanderson must know.

Rice found that the Department was “riddled with cultural issues”, in which serious sexual offending against children “could be thought to be a sign of failure which may reflect badly upon the executive”.

He also criticised Sanderson, claiming she “failed” to inform the Department that she wanted to know about the serious sexual abuse of children under the guardianship.

Rice made six recommendations to the State Government to ensure that incidents of child sexual abuse are properly handled by the Child Protection Department.

The Government says it will start implementing all six recommendations immediately.

Among key changes, the Government will establish a “significant incident reporting unit” within the Department and educate staff on the reporting protocols.

The review was called for by Sanderson in December following revelations two 13-year-old girls in state care were sexually abused by paedophiles.

The Department is riddled with cultural issues and that post-McCoole, it is too scared to report

The first case involved the abuse of a 13-year-old girl who had been under the guardianship of the state for about 10 years and who was preyed upon last year by paedophile Matthew McIntyre.

McIntyre was found guilty in September of grooming the girl using the teenage dating app MyLOL and having unlawful sexual intercourse.

The girl became pregnant as a result of the offending.

But Sanderson, the Department for Child Protection’s chief executive and the Guardian for Children and Young People were only informed of the case after sentencing remarks were published and the media asked questions.

In October, department chief executive Cathy Taylor refused to reveal to a parliamentary committee which of her staffers knew about the incident before it was taken to court, saying she didn’t want to “name and shame” and that no disciplinary action had been taken.

The second case emerged after a different 13-year-old girl in state care was found to be living with paedophile Philip Edwin McIntosh for two months while she was pregnant to a different man.

It is not seen, from within, as a sufficiently serious crime about which the Minister must know

McIntosh met his victim at the Red Square nightclub on Hindley Street and maintained a sexual relationship with her despite later learning her actual age.

Like the first case, Sanderson was only made aware of the circumstances after McIntosh was sentenced in the District Court.

According to Rice, the Department’s current reporting procedures are a “mess”, with staff confused about how to report sexual abuse and whether matters should be brought to the attention of the Minister.

He also found that the Department’s reporting procedures were “silent” about pregnancy.

Rice wrote it was “abundantly clear” from speaking to department staff that “none of them knew that there were (over time) different procedures for escalating up sexual abuse allegations involving a child under guardianship”.

“It was not as if they were too busy or chose not to comply with the procedures,” he wrote. “They were simply unaware of them.”

“I am unable to say whether that lack of knowledge is widespread but these two incidents arose in quite different parts of the Department and suggest that there may well be a systemic problem.” 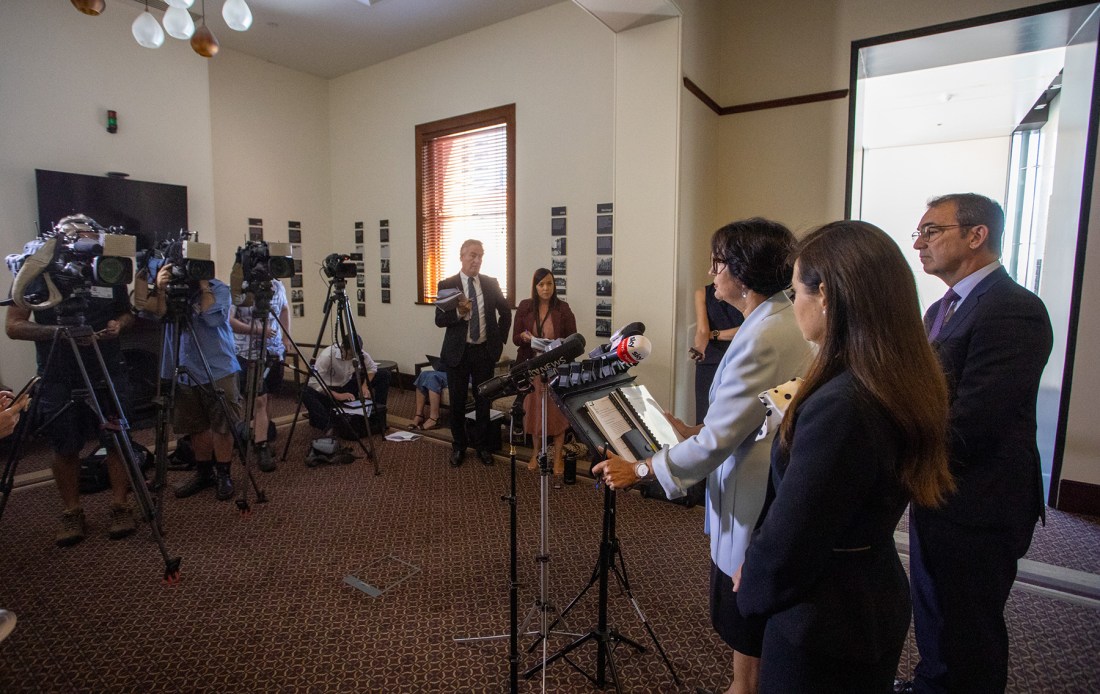 Attorney-General Vickie Chapman and Child Protection Minister Rachel Sanderson speaking to the media after the release of the Rice report. Photo: Tony Lewis/InDaily

Rice wrote that there was “no doubt” that Sanderson should have been told about both abuse cases in a “timely manner”, however, even if department staff had properly followed procedures, chief executive Cathy Taylor still had “significant discretion” to choose to pass on the information.

“Child sexual abuse of those under the guardianship is just one of those many crimes against children with which they must deal,” Rice wrote.

“It is not seen, from within, as a sufficiently serious crime about which the Minister must know.

“It is for those reasons that I doubt, even if the correct procedures had been followed, that the Minister would have been informed.”

Rice added that it was “hard to say” whether there was a culture of “self-protection” in the executive ranks of the Department, but “serious sexual offending against a child under guardianship could be thought of as a sign of failure which may reflect badly upon the executive”.

“As one of the interviewees put it, the Department is riddled with cultural issues and that post-McCoole, it is too scared to report,” he wrote.

Shannon McCoole, a former Families SA carer, was sentenced by Rice to 35 years in 2015 after pleading guilty to 18 horrific sex crimes against seven vulnerable children.

At the time, Rice described him as “evil and depraved”.

According to Rice, the fact Sanderson did not tell Taylor that she wanted to know about the sexual abuse of children in care was also a  “significant failure”.

“This is an important and significant area of Ministerial responsibility and the Minister cannot hope to be in a position to fulfil that responsibility unless she is expressly told about it,” he wrote.

“Much the same can be said about the pregnancies of the children under guardianship.

“The Minister should have explicitly said she wanted to be informed about pregnancies.

“Expectations were insufficient; these matters should have been articulated and put in writing.”

However, Sanderson this morning defended her actions, refusing to take responsibility for any failure.

“I have made it clear with my CE what my expectations are,” she said.

“I am getting regular reports from my CE of any significant incidents.

“We are definitely on the same page and I am having reports of incidents regularly reported to me.

“We have accepted all of the recommendations, we’ve expanded those, to ensure there is clarity over what is a significant incident, how that should be reported, the education process to ensure that all staff are aware so that incidents like this in future will be reported”.

Rice wrote that he was provided with case files for both girls who were sexually abused, but “there were a number of redactions from those files”.

He said he was “assured” that none of the redacted material was relevant to the inquiry.

“I had a strong sense that the Department is reluctant to share information,” he wrote.

The Government says redacting part of Rice’s report was to protect the identities of the two girls who were sexually abused.

It has accepted all recommendations handed down by Rice and says it will start implementing them immediately.

The State Government says it will also introduce additional measures.

Additional action to be taken by the Government:

Premier Steven Marshall said the Government had “acted swiftly” and Sanderson “absolutely” still had his full support despite Rice finding a “significant failure” on her part in making it clear that she needed to be expressly told about such serious sexual abuse of children in care.

“We take this matter extraordinarily seriously,” he said.

“This is of great concern, it is completely unacceptable and that’s why we accept all six recommendations and go further.”

Attorney-General Vickie Chapman said reporting procedures would be overhauled so “so they are no longer ambiguous and difficult to understand”.

“Cabinet has considered the recommendations of Mr Rice – they are 100 per cent accepted for implementation,” she said.

“Child protection is a high priority for this government and we want to get it right.”

But Opposition child protection spokesperson Katrine Hildyard said it was “shocking and deeply unacceptable” that Sanderson had “refused still to take responsibility about these failures”. 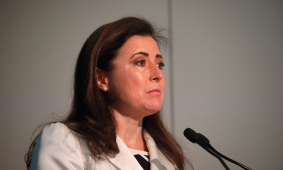 “The fact that the Rice Review has made it clear that it is her failure that has led to this situation where nobody had any knowledge, where no action was taken, is absolutely terrible,” she said.

“It’s also unacceptable that both the Premier and the Deputy Premier seem to continue to run a protection racket for this Minister.”