InDaily reported yesterday that SA Health had given a $1.1 million contract to Perth-based software company GenVis to develop a new smartphone app that uses facial recognition and GPS tracking technology to monitor people who are ordered to self-quarantine at home.

GenVis is behind Western Australia’s “G2G Now” app, which uses facial recognition and phone location data to check if people in quarantine are at their registered address.

The WA app sends users a push notification to check-in and gives them five minutes to take a photo of themselves, before matching the photo and location with the user’s registered details to ensure that they are complying with their quarantine direction.

While not compulsory in WA, the app is encouraged by the State Government, which claims it “keeps you safe and the rest of the community safe while freeing up more police resources that would otherwise be undertaking more regular physical checks”.

But WA media reports have raised concerns of “serious glitches” in the technology, which have led to people isolating at home being told to leave their two-week quarantine early.

WA Today reported last month concerns from several users, who said they received warnings for failing to be at their designated address despite being at home, while others said they were cautioned over missing check-ins that were never requested.

According to the report, the glitches have “sparked concerns among users that returned travellers carrying the virus could be out in the community despite not having completed their mandatory isolation”.

One user quoted in the report said the app appeared to have registered her address at a location about one kilometre away from her actual home.

She reportedly said that the app also relied on outdated medical records linked to her former married name, which she had legally changed in 2005.

The app has received a multitude of negative reviews on the App Store, with one user describing the technology as having “more bugs than a roach infestation”, while another said it was “frustratingly useless”. 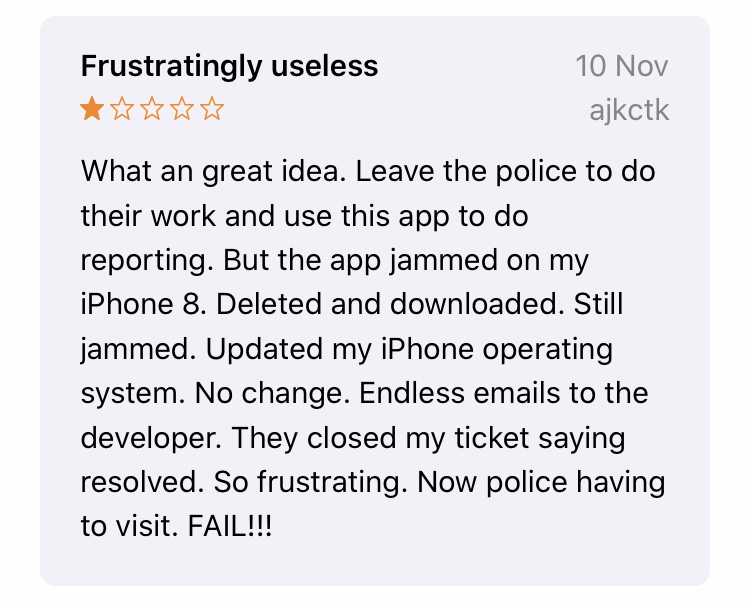 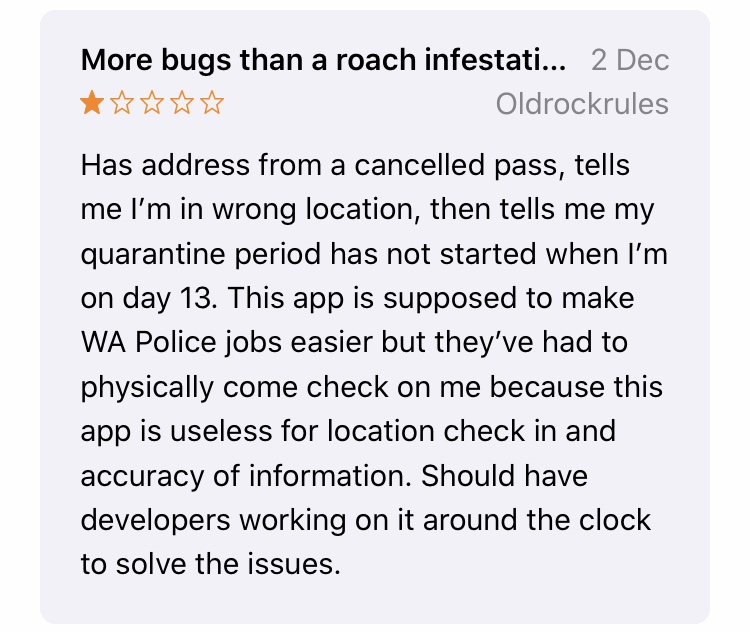 Screenshots of “G2G Now” app reviews on the Apple Store.

InDaily asked SA Health this morning whether it was aware of the reported concerns and what action it was taking to ensure the South Australian version of the app would not encounter the same problems.

A spokesperson told InDaily that SA Health did not have any more information beyond a statement it provided yesterday.

That statement said: “We continue to work with the successful tender on the development of the app.

“Final details, including the full range of features and expected delivery timeframe, are still in discussion.”

The State Opposition is calling on the Government to outline what concerns have been raised about the app, release consultancy reports on its reliability and outline the process by which the $1.1 million contract was awarded.

Labor’s Health spokesperson Chris Picton told InDaily there were “clearly serious issues with this app that needs to work 100 per cent of the time when dealing with a deadly pandemic”.

“The contract for this app was signed three months ago, yet nothing has been released and the government are refusing to answer questions,” he said.

“We understand the app’s $1.1 million SA version isn’t working properly yet, which is why the Government is not answering questions about it.

“Sources indicate the app has been subject to an external review, with concerns about the reliability of the location tracking and facial recognition.

“To protect the state you can’t have a pandemic quarantine app that doesn’t provide complete reliability.”

Police Commissioner Grant Stevens told reporters this morning the app was “in the early stages of development” and “certain requirements need to be built in to the capability to make it effective”.

He said it was too early to say when the app would be available and how police would use it.

“We take a very detailed approach to how we consider new technologies,” he said.

“We put it through significant user testing before we actually put it into operational effect, so if there are glitches I’ll be confident that we identify those.

“Whether that’s a factor that prevents its roll-out or something that needs to be modified, we’ll work through that process.”