Adelaide woman Gemma Dunlevey has written to Health Minister Stephen Wade and chief public health officer Nicola Spurrier in an email seen by InDaily, detailing a series of complaints, questioning the bill for her quarantine and suggesting potential further action.

It’s understood health authorities have since agreed to waive her accommodation charges altogether and have opened an internal investigation into the handling of her case.

Dunlevey, 24, and her partner Joseph Paxinos, 25, returned to Australia – despite an initial cancelled flight – after a two-year working holiday in the UK on a youth mobility visa, which expired in December.

In her correspondence, she alleged SA Health “failed by a long shot [to] meet what would normally be considered its contractual arrangements in such a situation”.

She alleges she was left with rancid food piling up uneaten in her medi-hotel room, which she says wasn’t cleared even when she was admitted to hospital for several days as her condition worsened with the highly-contagious new strain.

She further says authorities mistakenly told her to re-quarantine days after she was released – but did not seek her contact tracing information for the days she had been in the community.

The mistake, she says, was only identified and rectified due to a family connection who had a contact within the health department.

After initially being placed in ordinary hotel quarantine, Dunlevey was separated from Paxinos after she “tested positive for the new strain of the virus that is rife in the UK right now”.

“I experienced very severe symptoms of body aches, headaches, nausea, loss of appetite, vomiting, diarrhoea, pneumonia and more,” she writes, alleging: “I lost a total of six kilos in hotel quarantine and received inadequate care from hotel nurses [who] did not provide me with medical care or treatment.”

“They called multiple times a day to ask about my mental health but weren’t helpful with my physical wellbeing.

“I was constantly told that my symptoms were psychological and the nausea was due to stress or anxiety.

Dunlevey says she was “unable to drink water and was vomiting stomach bile”.

“At one point I called the nurses for assistance and was put on ‘hold’ so the nurse I was talking with could ask her supervisor.

“Unfortunately, she forgot to actually put me on hold and I heard the whole exchange where the supervisor expressed her frustration that I had called,” she wrote.

“I felt really neglected by the nursing staff and really afraid of what would happen to me.” 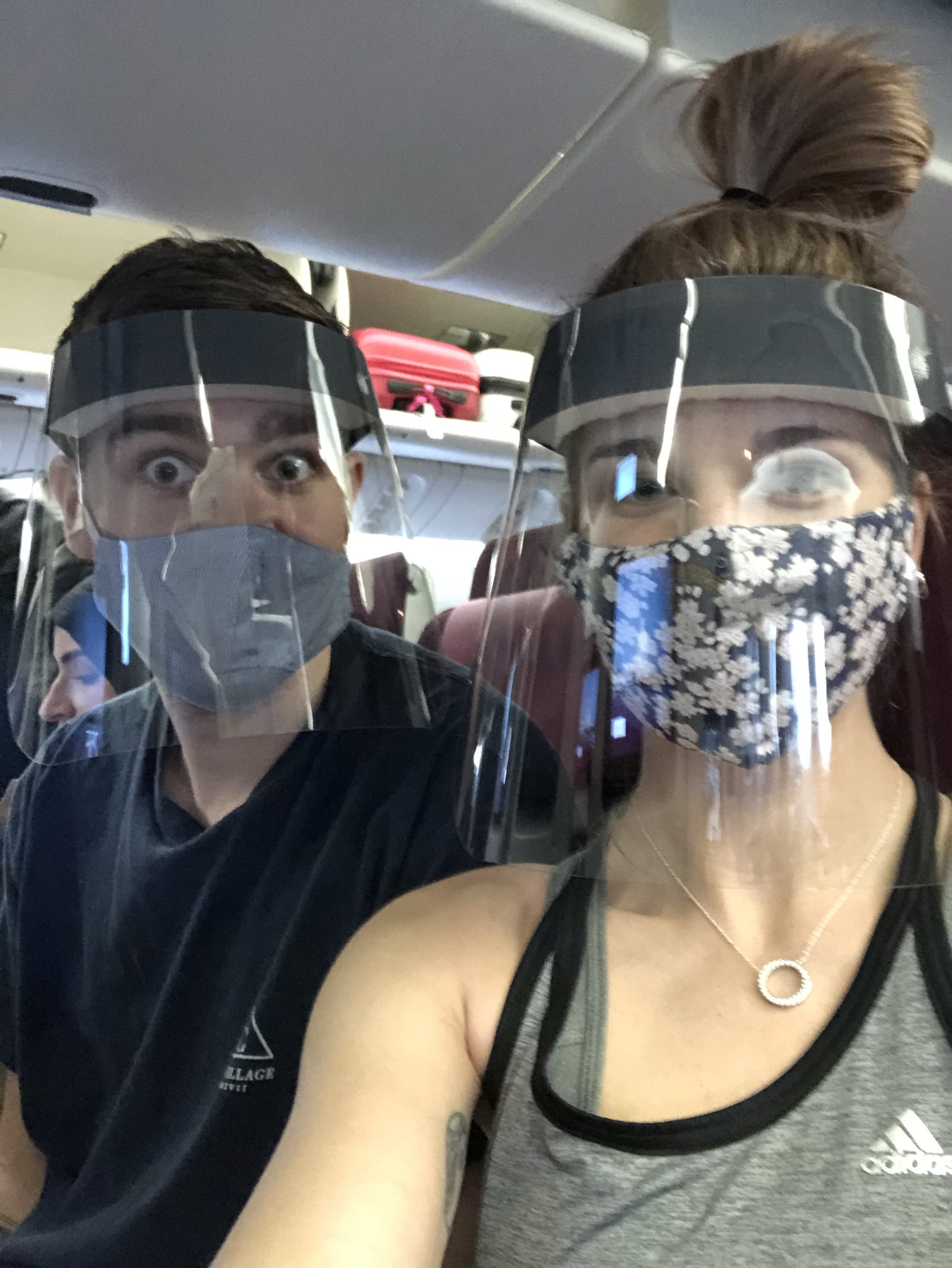 The couple on their flight.

She was transferred to the temporary accommodation for COVID-positive patients in the Pullman Hotel, which she “found to be no different to my original room”.

“I received no assistance from nurses despite calling multiple times a day concerned about my declining health,” she alleges.

“After seven days of these symptoms I was shaking, dehydrated, weak [and] unable to stand in the shower, and hadn’t been able to eat or drink anything for three days.”

She was finally admitted to the Royal Adelaide on Christmas Day “after speaking to a GP”.

“I stayed in the RAH for a total of 7 days and was discharged back to the hotel to complete the remaining few days.”

Having arrived back at her hotel room, she says, “what I didn’t understand is why after seven days in hospital, no one emptied the bin in my room”.

“I hadn’t eaten anything before I was hospitalised and I had requested the kitchen not send me food but it kept coming, so I would put it straight into the black garbage bags provided,” she writes.

“When I returned to my room after seven days it stank absolutely vile.

“I had meat, fish, yoghurt and more all sitting in the black bin bag waiting to be collected.

“The whole room smelt of off fermenting food and as stated above I was nauseous already due to the COVID.”

She said she asked staff to remove the bins but was refused as “it was a ‘waste of a clean trolley’”.

She alleges things got worse after she was released from quarantine on January 3.

“My COVID clearance paperwork stated that I was cleared from the virus on the 29th of December [but] I then received a phone call from SA Health on the morning of the 5th of January saying that a law changed that day meaning I, and my entire household, had to go back into quarantine and all receive COVID tests,” she writes.

“This is due to me having the new strain.”

She was told she “would have to remain in self isolation until I tested negative”.

“I was told that this can potentially take months even though I was no longer contagious,” she adds.

“I was given no information about how often my tests would be and I was under a massive amount of emotional stress.”

She alleged SA Health told her step-brother, who was holidaying in a hotel with friends, “to pack his bags, leave the hotel and not tell his friends where or why he was leaving”.

“SA Health was not interested in my track and trace information from the two days I was out of quarantine,” she notes.

“This in itself says to me that they knew I was not contagious and they had no authorisation to place my family and I in that position.”

Her only contact with SA Health for updates was via the public helpline, whose staff told her “that they only read information off the SA Health website and that they couldn’t help with my unique situation”.

“I was left in the dark and worried that I would be stuck in my bedroom for months.”

Her family was forced to move to temporary digs at a holiday park to ensure she had access to kitchen and bathroom facilities while in home isolation.

In the event, a family connection was able to get through to someone at SA Health “to call me with my results”.

“At roughly 8pm on Thursday the 7th of January I received a call from a risk assessor from SA Health saying he has no idea why I was told to self-isolate,” she alleges.

“He was very apologetic and said that whoever called me on the 5th was incorrect in their direction to self-isolate.

“He said I was not contagious and posed no risk to the community, which had already been discussed.”

Dunlevey said “it makes me sick to think of what would have happened if I didn’t have this connection”.

She says she received a follow-up call of apology, but argues “it really isn’t good enough”.

“I have no confidence in the way SA Health are dealing with the COVID situation and the way they are issuing what they say are lawful and reasonable directions over the phone,” she writes.

“In any other circumstance a lawful direction would be provided with a reference to some sort of authority, power or section in legislation.”

She sought a waiver of her quarantine bill “due to the time I spent in hospital, the food that was provided that you knew I couldn’t and didn’t eat and the irregularity around the cost”, given she was charged extra for a separate room after her positive test.

“Should you decline to waive my quarantine bill in part or full, I ask that a reasonable extension of time is granted,” she asks.

She suggests she will also consider “legal representation to establish avenues of appeal”, although it’s understood SA Health has since agreed to waive all charges.

A spokesperson for the Department for Health and Wellbeing told InDaily: “We have been in discussion with Ms Dunlevey about her complaints and will work with her to come to an agreed outcome.”

“We take all complaints seriously and make changes to our systems when and where issues are identified,” they said.