A further 17 sheds and outbuildings and two vehicles were also destroyed – but authorities say the toll could have been much worse and they managed to save 60 other houses.

The CFS issued an update on Monday evening confirming that many strike teams had now been stood down after more than 400 firefighters worked through the day to contain the Cherry Gardens fire, which razed more than 2700 hectares of scrub and grasslands.

Skeleton crews will remain overnight to monitor the fireground and respond to any flare-up or incidents.

It comes as a man charged with starting another nearby bushfire yesterday appeared in court as authorities investigate any links to the major Cherry Gardens blaze.

There had been an emergency warning in place in the morning but the CFS this afternoon said rain had helped reduce the risk and there was now no threat to life or property.

Many roads in the area have also been reopened.

Late this afternoon, a CFS spokesperson said assessments had revealed the extent of the damage to property: two houses and 17 outbuildings including sheds have been destroyed along with two vehicles, while another two outbuildings have been damaged and 60 homes have been saved.

But the CFS earlier said it was difficult to say when the fire would be controlled, with State Duty Commander Yvette Dowling saying it could continue to burn in dense vegetation for up to a week.

“The rain won’t put the fire out but will assist the crew on the ground,” she said.

“We’re hoping it won’t make fire tracks slippery and make it dangerous for our crews.”

She said yesterday’s sweltering conditions were a “recipe for disaster”, with high fuel loads and “erratic fire behaviour”.

About 400 firefighters today battled the Cherry Gardens fire, which has so far burnt more than 2700 hectares. 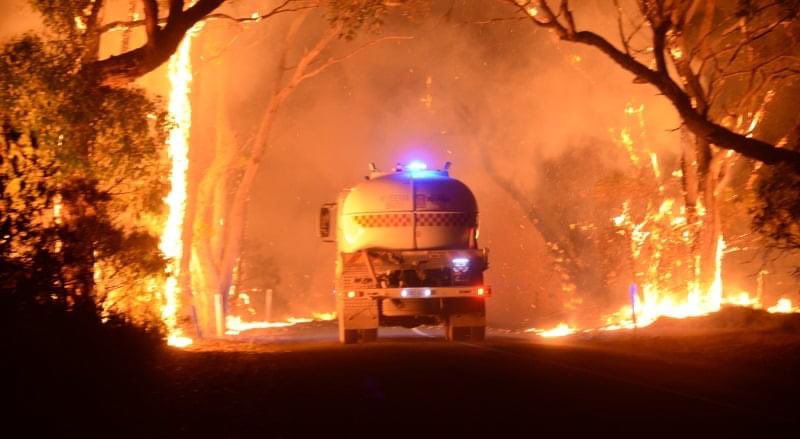 A photo of last night’s blaze taken by a CFS member and tweeted by Opposition Leader Peter Malinauskas.

But apart from a CFS crew member being treated for smoke inhalation, there were no reports of injury or death.

“When you look at what the fire behaviour was doing yesterday it could have been a lot worse if it weren’t for the great work of crews on the ground and the aircraft supporting those crews,” Dowling said today.

Around 250 residents attended a community meeting this morning, after a man was arrested overnight, charged with a raft of offences including causing a bushfire. The man was allegedly caught speeding away from the scene of another blaze at Clarendon. 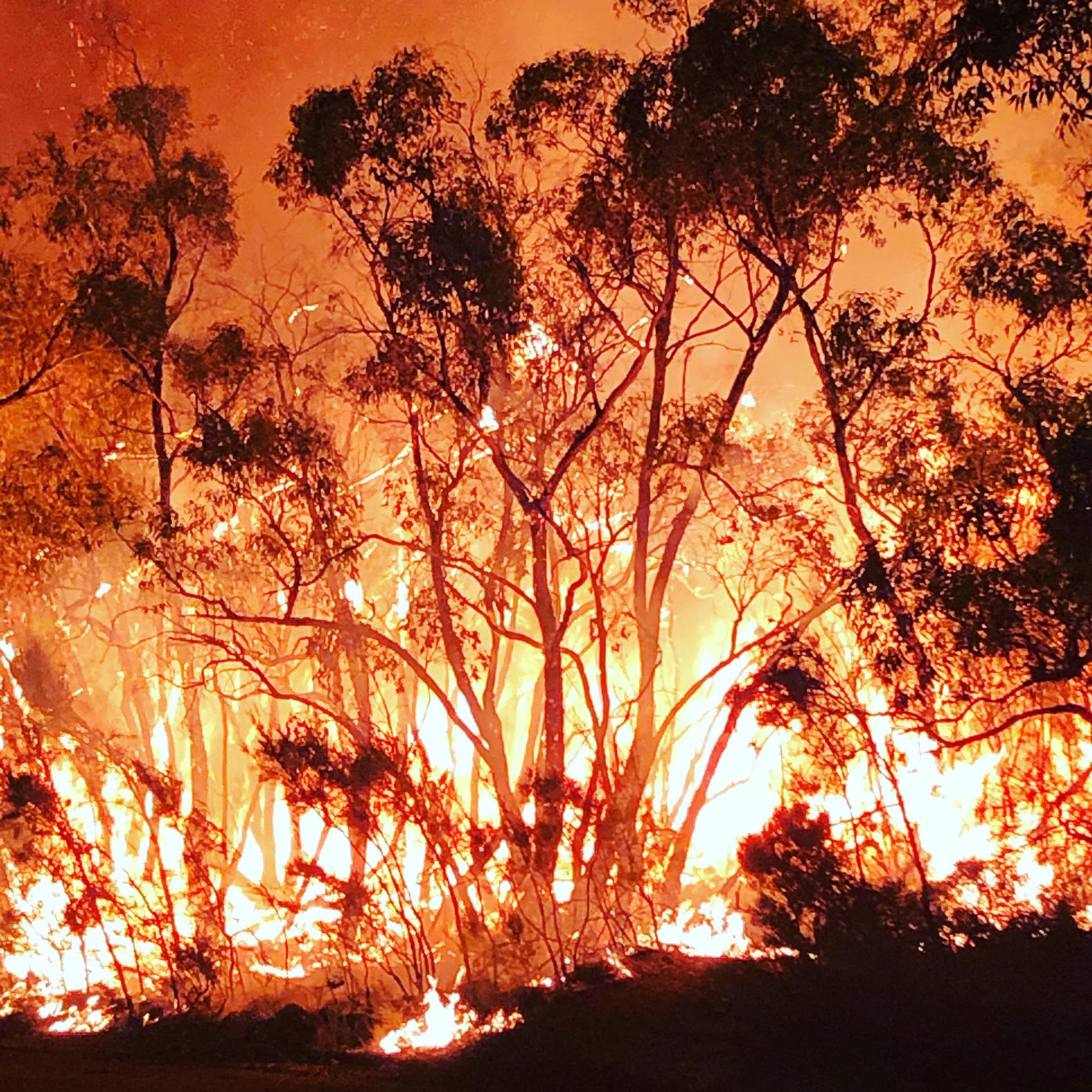 Police charged a 60-year-old Hallett Cove man with causing a bushfire, driving unlicensed, engaging in a police pursuit, drink driving and altering number plates, after they say they caught him leaving the scene of a fire at Clarendon last night.

He appeared in court this afternoon and his identity was suppressed, as police continue to speak to witnesses and investigate whether there are links with other fires in the area.

Police are now reportedly analysing the man’s phone and smart watch for clues about his movements in the area yesterday.

He did not apply for bail and was remanded in custody.

The Clarendon fire was extinguished by members of the public with minimal damage caused to scrubland.

Dowling said investigators will examine “each fire start separately then come back and work out if there’s a pattern or any linkages”, but noted “when you get multiple fire starts all in the same place you’ve got to wonder what the cause is”.

She said the CFS routinely investigated accused firebugs for historical links to its service, but said the arrested man was “definitely not a current volunteer”.

“We look at that with any person that’s been convicted of lighting a bushfire, that’s our normal process,” she said.

Police were called to a bushfire on Piggott Range Road about 6pm and say they saw a white Hyundai sedan driving away.

The vehicle’s number plates also appeared to have been altered.

Police say they attempted to stop the car but it failed to stop and they chased it. They say the car stopped a short time later and they arrested the driver.

Police and Emergency Services Minister Vincent Tarzia said he expected the book to be thrown at anyone responsible for deliberately lighting fires.

“These sorts of acts are absolutely despicable – we condemn them,” he said.

Dowling said it was also concerning to think that “while you’ve got crews out fighting fires you could have someone out behind you lighting fires and putting our crews in danger”.

“Hopefully SA Police has caught the person who has lit some fires,” she said. 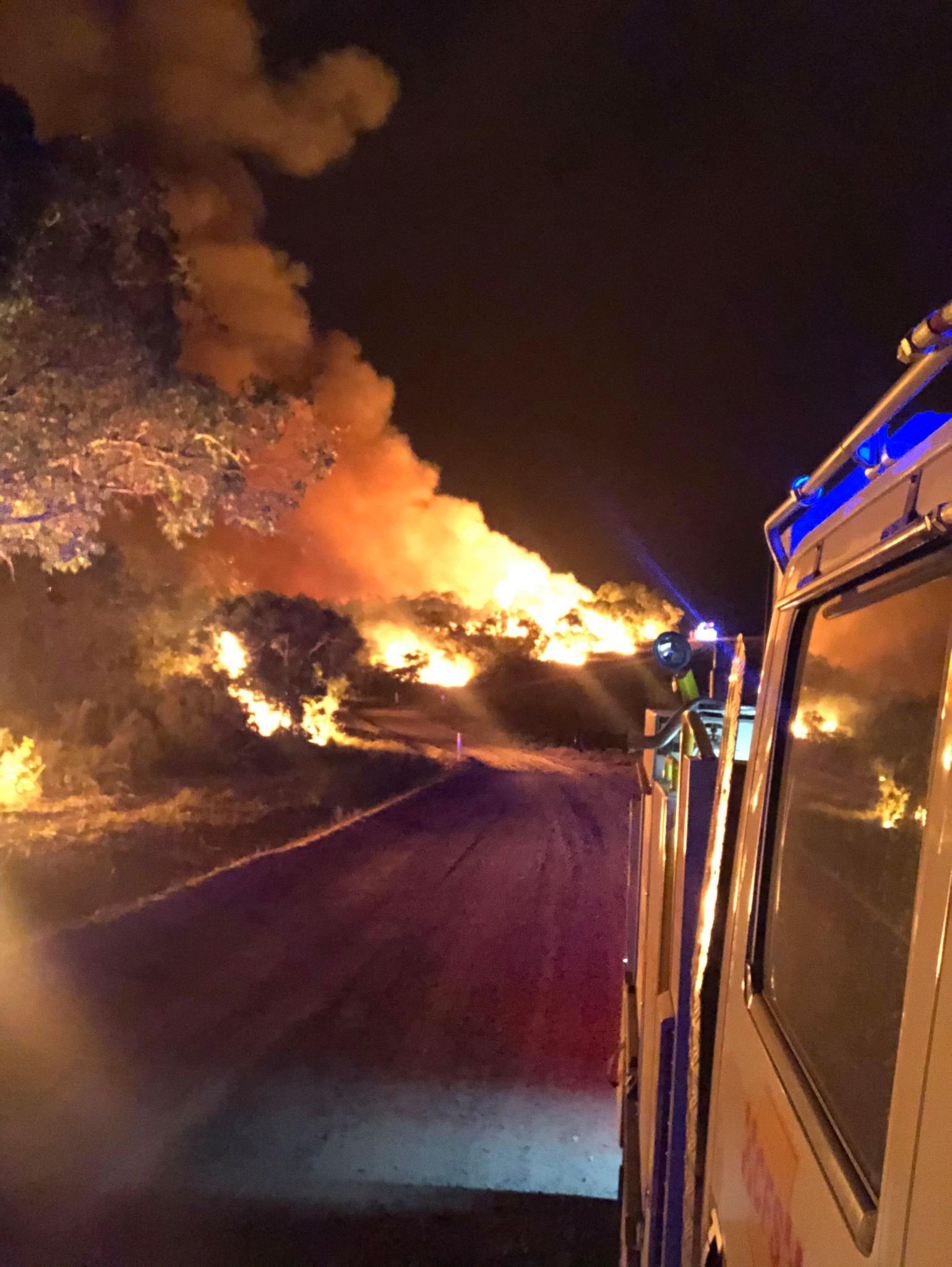 The CFS said the Cherry Gardens, Hicks Hill Road scrub fire was uncontrolled and burning in a North Easterly direction towards Longwood, Mylor and Biggs Flat, with conditions continually changing.

Prime Minister Scott Morrison has offered federal assistance and wished the people of South Australia “the best” as they battle the blaze in “difficult terrain”.

Dozens of residents were forced to leave their homes overnight, after the fire started about 4pm near Hicks Hills Road at Cherry Gardens and quickly spread, creating a huge plume of smoke visible from as far Kangaroo Island.

Many animals including horses also had to be removed.

With smoke blanketing much of Adelaide this morning, a health alert has been issued for those with lung and heart conditions. 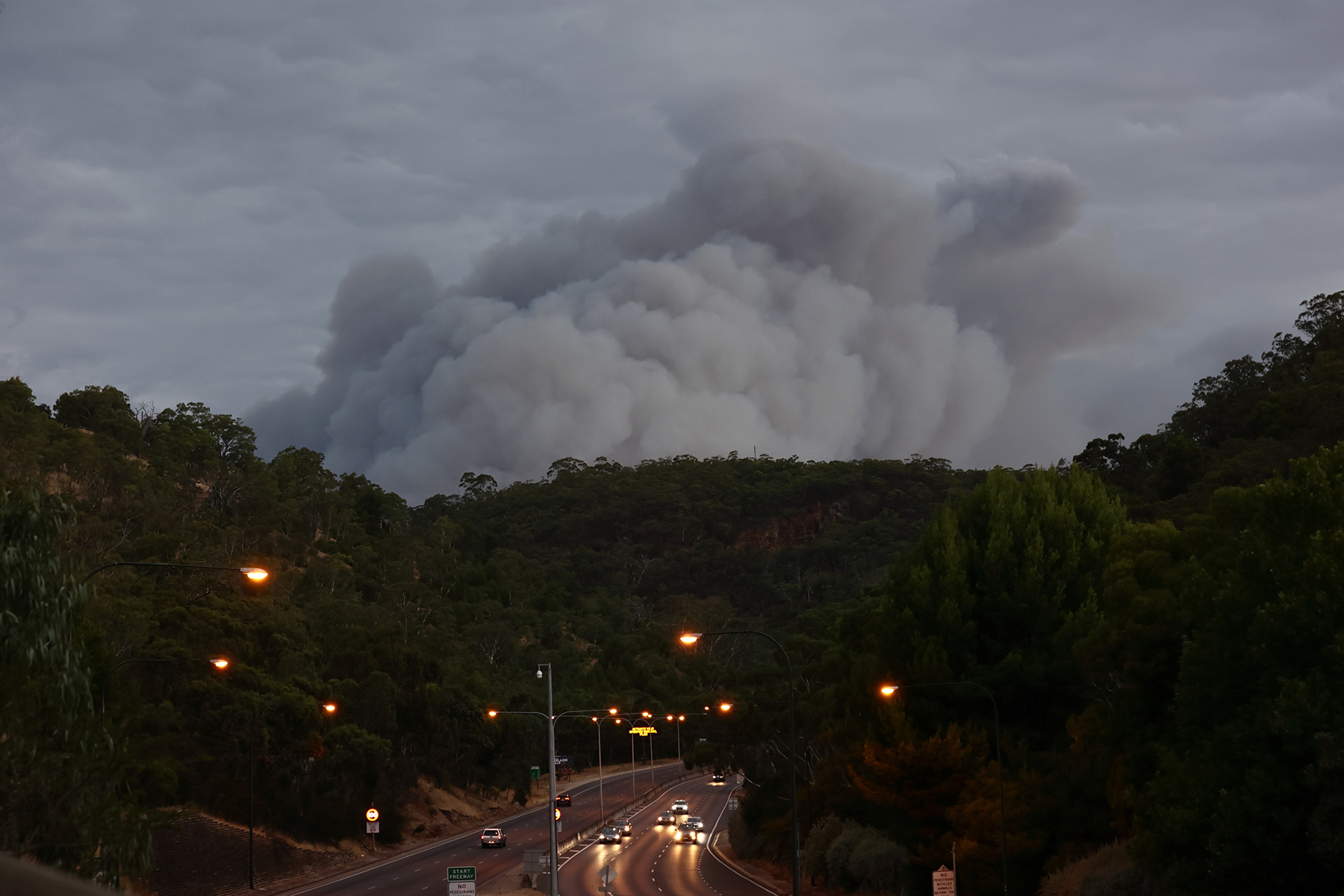 The smoke plume over the Hills on Sunday. Photo: Tony Lewis/InDaily

“We are urging people to stay indoors where possible, avoid physical exercise outdoors and reduce their exposure to smoky air,” Kirkpatrick said. 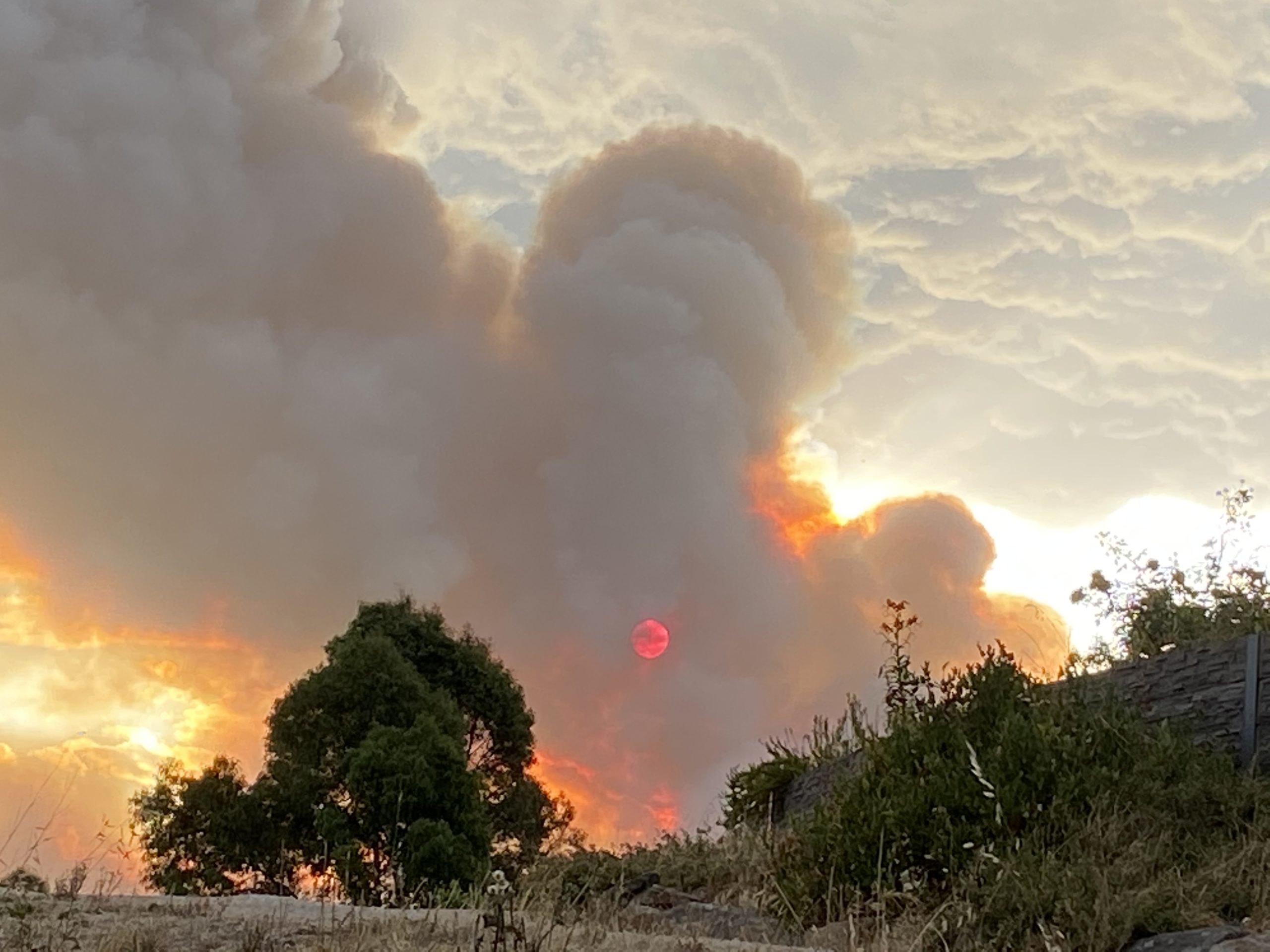 “People should keep windows and doors shut, and ventilate the house once the smoke clears. 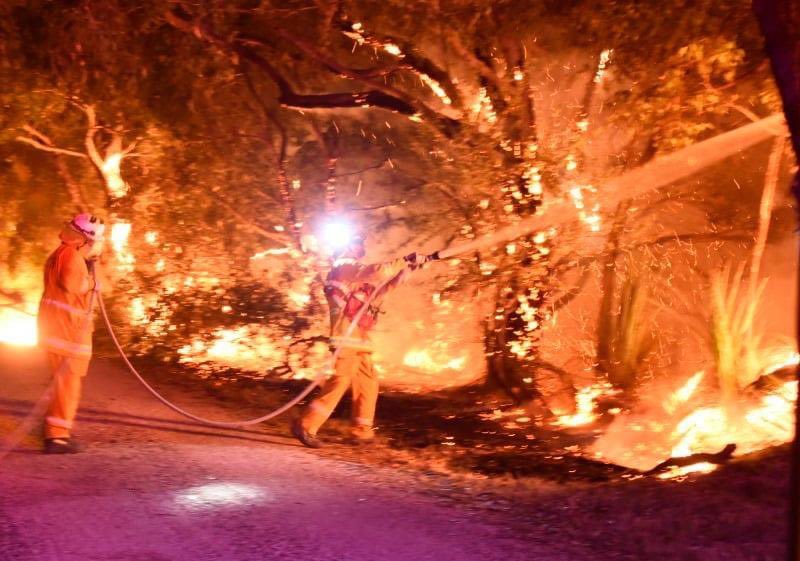 A photo of last nights blaze taken by a CFS member and tweeted by Opposition Leader Peter Malinauskas.

“Other vulnerable groups include people 65 years and older, young children and infants, pregnant women and people with diabetes.”

The CFS and State Government said they would review communications systems, following complaints from some hills residents that they didn’t receive alerts about the danger until this morning.

Dowling said “we will investigate it and then report back”, while Tarzia said although his advice was that the Alert SA app had worked “very well”, messaging would be reviewed.

Premier Steven Marshall urged residents not to rely on “a single source of information with regards to their bushfire alert” but to stay informed with “multiple sources of information”.