Thousands of National Guard troops are in place around the nation’s capital, while the perimeter of a high fence surrounding the Capitol was pushed out to encompass the US Supreme Court and the Library of Congress, amid warnings of further political violence in the wake of the Capitol riot and President Donald Trump’s impeachment for incitement of insurrection.

Nearby roads are closed, some businesses said they would shut down next week, and the city’s public transportation agency said it was closing certain metro stations and rerouting bus lines from Friday through January 21.

The National Park Service has closed the Washington Monument to tours and is deciding whether to close the National Mall running from the Capitol to the Lincoln Memorial. Mayor Muriel Bowser has asked visitors to stay away from the city.

Delta, Alaska, American, and United Airlines announced on Thursday they would not allow travellers flying to Washington area airports to check firearms on its flights before the inauguration.

Delta chief executive Ed Bastian told CNBC his airline had placed passengers on a no-fly list for their involvement in disruptive incidents that, for example, targeted Republican US Senator Mitt Romney.

The actions follow the storming of the US Capitol last week by supporters of President Donald Trump and disturbances on flights and at airports. Officials have warned of plans for armed protests in Washington and all 50 states.

FBI director Christopher Wray said he was “concerned about the potential for violence at multiple protests and rallies planned here in DC and at state capitol buildings around the country”. 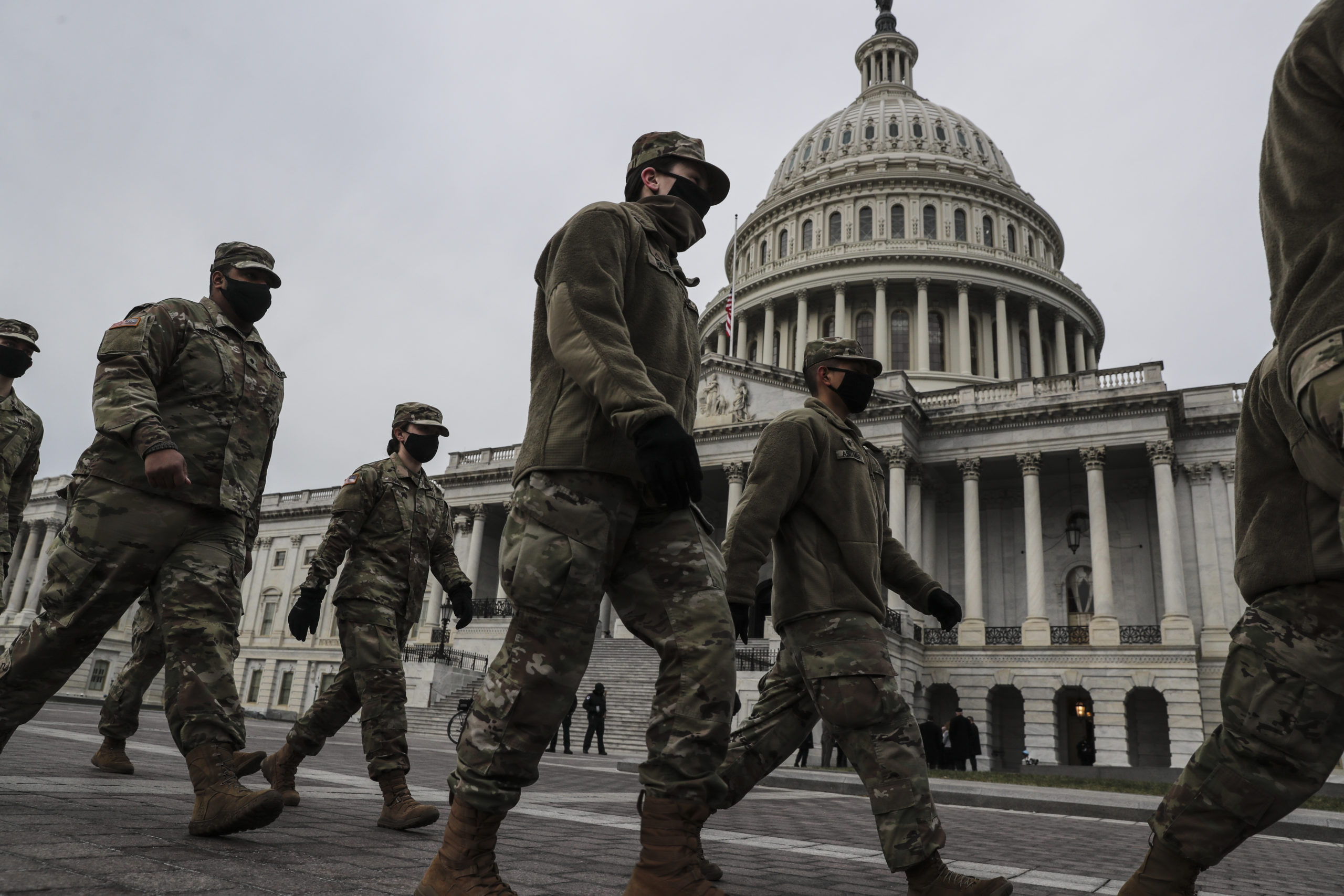 Law enforcement officials have warned of potential violence beyond the US capital. In Ohio, Governor Mike DeWine said the statehouse and state office buildings in downtown Columbus would be closed from Sunday through Wednesday.

“You will see a resurgence of activity and planning and extremists’ threats. So I don’t think this problem is going away with this president leaving the White House,” McCord said.

A federal judge today ordered a retired firefighter in Pennsylvania to be detained pending trial after prosecutors filed charges alleging he hurled a fire extinguisher at police during last week’s mob attack on the US Capitol.

Magistrate Judge Henry Perkin for the Eastern District of Pennsylvania said the alleged actions of Robert Sanford, 55, of Chester, Pennsylvania, posed a “danger to the community” as well as to “democracy and our legislators”.

According to court documents, Sanford was captured on video hurling what appears to be a fire extinguisher at police. In sworn statements, investigators said the object ricocheted multiple times and struck three officers, one of whom was not wearing a helmet.

Prosecutors said in court on Thursday a search warrant executed at Sanford’s home uncovered paraphernalia referencing the far-right Proud Boys group. Sanford’s lawyer told the judge his client was not a member of any extremist group and had no criminal history.

The Justice Department has brought more than 80 criminal cases so far against participants in the Capitol riot.

President-elect Joe Biden will unveil a stimulus proposal designed to jump-start the US economy during the coronavirus pandemic and help minority communities with about $US1.9 trillion in aid.

Biden campaigned last year on a promise to take the pandemic more seriously than President Donald Trump, and the package aims to put that pledge into action with an influx of resources for the coronavirus vaccine rollout and economic recovery.

The incoming administration will work with Congress on the quick stimulus package after Biden takes office on January 20, although the impeachment of Trump threatens to consume lawmakers in the initial weeks.

The stimulus package has a price tag of about $US1.9 trillion ($A2.4 trillion), the New York Times reported, and includes a commitment for $US1400 stimulus cheques, according to a source familiar with the proposal.

Biden is expected to commit to partner with private companies to increase the number of Americans getting vaccinated.

A significant portion of the additional financial resources will be dedicated to minority communities. “I think you will see a real emphasis on these underserved communities, where there is a lot of hard work to do,” said another transition official.

Biden plans to introduce his package during a prime-time address on Thursday evening but he will have to compete for attention with the political drama in Washington.

The Democratic-led House of Representatives voted to impeach Trump on Wednesday, making him the first president in US history to be impeached twice.

More than 380,000 people in the United States have died of COVID-19 during the pandemic, with 22.7 million infected during that time. Pandemic-related shutdowns and restrictions have cost millions of US jobs.

Although Trump himself supported $US2,000 cheques for Americans in the last round of stimulus, many of his fellow Republicans baulked at the high amount, settling on $US600 cheques instead.

Biden may face additional opposition from Republicans to his efforts but he will be helped by his fellow Democrats controlling both the House and the Senate.