Brisbane will enter a hard lockdown from 6pm tonight, while four new cases of community transmission have been confirmed in NSW.

Residents in the Queensland council areas of Brisbane, Logan, Ipswich, Moreton Bay and Redlands will be required to stay at home until 6pm Monday except for essential work, exercise, essential shopping and to access healthcare, with masks mandated for people leaving home in the Greater Brisbane area.

SA Premier Steven Marshall confirmed late this morning that the areas had been declared national hotspots at the request of Queensland Premier Annastacia Palaszczuk.

That followed a meeting of the national cabinet that had been brought forward from early February in response to fast-developing events, with the potential of the new strain – which Marshall said was “50 to 70 per cent more transmissible” than previous outbreaks – entering the community.

“People won’t be moving in or out of those areas as of 6 o’clock tonight,” he said.

“As of midnight tonight, anyone coming in [to SA] from that area will be required to do a 14-day quarantine.”

Further, he said, anyone currently in SA who has travelled in the Brisbane area since January 2 “will receive an SMS message from SA Health requiring them to go and get themselves tested”.

SA Health late today issued updated advice saying anyone who had been in Greater Brisbane after January 2 must further self-isolate while awaiting their initial test result.

“We will clearly be looking extremely closely at this case over the next three days [and] if we need to take any further action with regard to border restrictions with Queensland, we will have no hesitation,” he said.

Chief Public Health Officer Nicola Spurrier today confirmed three new COVID-19 cases in SA, a man in his 40s, a man in his 60s and a woman in her 30s, all of whom had returned from overseas and are staying in medi-hotels.

However, she also revealed genomics testing had confirmed “another two cases of that UK variant here in SA, in our medi-hotels”.

“We’re in a good situation here in SA and we want to remain in that situation… but I want South Australians to understand [that] we do have that variant here in our own state,” she said.

“We’ve got to be very mindful of that, and not have complacency.”

SA now has a total of 585 confirmed cases, with 12 remaining active, after more than 5400 tests were conducted yesterday.

Spurrier said it was “absolutely important for any South Australians to reconsider any travel plans they have [to] Queensland”, revealing she was among those affected.

“I happen to be in an unfortunate situation of having to rethink my own travel plans,” she said.

“People have holiday plans, we have things in place -but the virus doesn’t care [so] we just have to do what we have to do.”

She said the Greater Brisbane lockdown was “a circuit breaker similar to what we did with the Parafield Cluster” but noted: “Things can change quickly.”

Also today, the nation’s leaders adopted a suggestion from Marshall national cabinet had shot down only last month, with pre-flight testing of international arrivals to Australia to begin.

After last month’s Canberra meeting, Marshall’s office said the suggestion – part of SA’s eight-point plan announced in the wake of the Parafield cluster – was rejected after “advice from the Chief Medical Officer that it was unlikely to significantly reduce the risk and unable to be implemented”.

However, today Marshall said “our suggestion for pre-flight testing has been agreed to”.

“There’s still some logistical issues [but] this was a critical part of our eight-point plan in SA and I’m very pleased that my colleagues in national cabinet have now agreed,” he said.

The meeting has also mandated the wearing of masks on all domestic and international flights, and determined that “we won’t be increasing the overall number of international repatriation flights”.

“There was some pressure for states to increase their room caps, but SA will remain where we were – which was diminished from a few weeks ago prior to the Parafield cluster,” Marshall said.

News of the Brisbane lockdown prompted crowds to strip supermarket shelves of toiletries, perishables and canned goods with lines stretching for hundreds of metres at some stores.

Shoppers face long waits during the countdown to the 6pm Friday deadline, with social media flooded with images of bare shelves and long checkout lines. 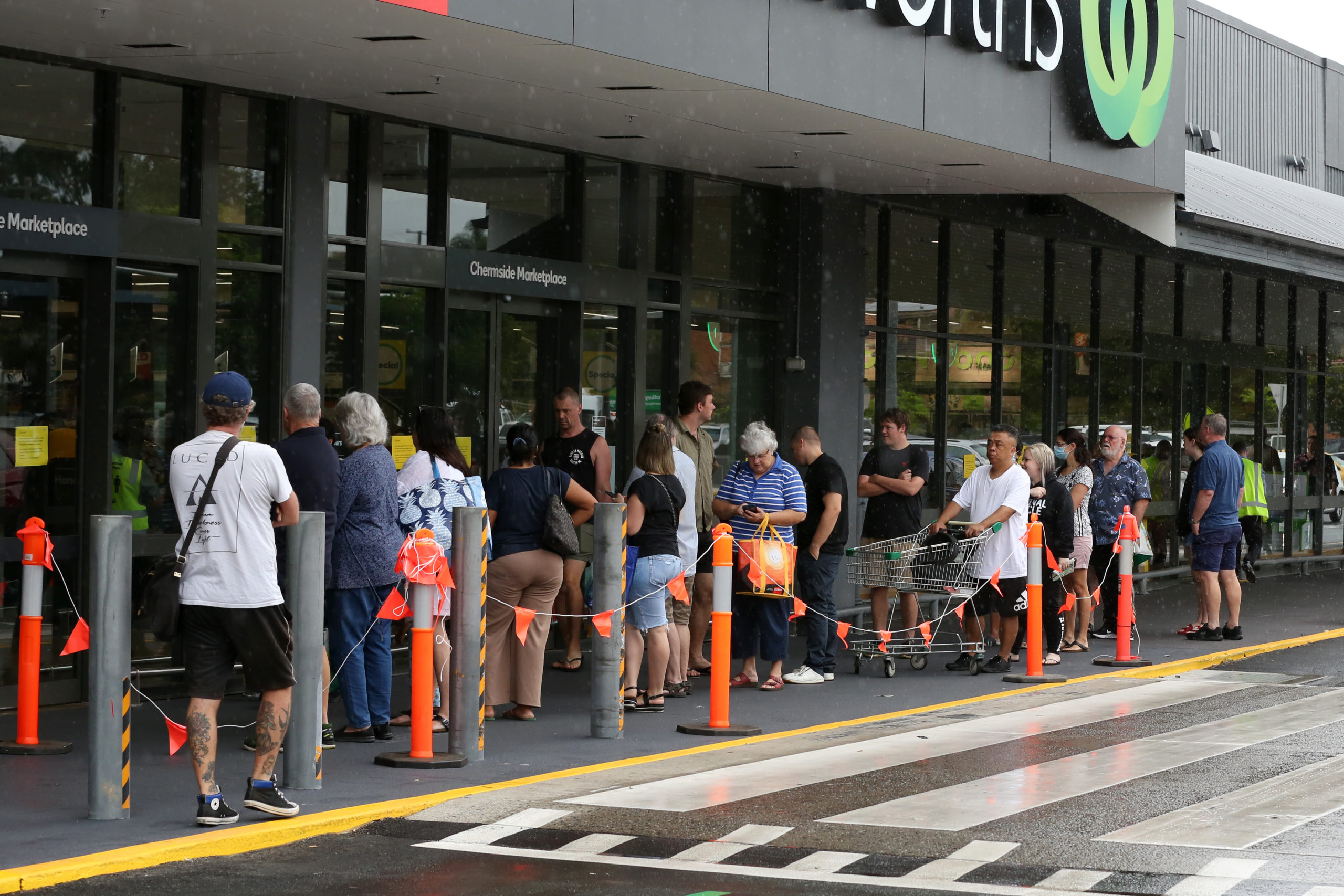 A queue is seen forming outside Woolworths at Chermside Marketplace in Brisbane. Photo: Danny Casey / AAP

“It is incredibly important in this time to stop the spread of this infectious UK strain, we must act immediately, we must act strongly and we have taken those strong measures today.

“Think of it as a long weekend at home, we need to do this. If we do not do this now it could end up being a 30-day lockdown.”

The cleaner is Australia’s first case of the more infectious strain of the coronavirus outside of quarantining returned overseas travellers.

“We do know that we’ve had cases of the UK variant in our hotel quarantine system,” he told ABC RN.

“And we do know sometimes with a very complex system which relies on humans, mistakes can happen. That apparently is the case here.”

She visited several locations while potentially infectious and contact tracers are tracking her movements.

The woman travelled on a train from Altandi station to Roma Street station at 7am on January 2, then returned on the 4pm service the same day.

She also visited Woolworths at the Calamvale Central Shopping Centre from 11am to 12pm on Sunday 3 January.

Residents of Algester, Sunnybank Hills and Calamvale who have symptoms of the infection are especially urged to get tested as soon as possible.

The source of this infection remains under investigation.

Seven cases were also recorded in returned travellers from more than 26,000 tests in the 24-hour period to Thursday night.

It comes after NSW recorded no locally acquired cases of COVID-19 in the 24-hour period to Wednesday night.

South Australian authorities have said they will not reopen to border to NSW until it records 14 days of no community transmission cases.

The northern beaches case has prompted new alerts in a supermarket and discount chemist in the area.

They apply to anyone who shopped at Woolworths in Avalon at certain times between January 2 and January 6 and was at Chemist Warehouse for 15 minutes to 1.15pm in Avalon on January 3.

“Anyone who attended the following venues at the times listed must immediately get tested and self-isolate until you receive a negative result,” NSW Health said on Thursday night.

The state’s Chief Health Officer Dr Kerry Chant said the man did not present symptoms until after he completed quarantine, at which point he sought re-testing.

“It does highlight that with that level of community transmission in that northern zone … that is the risk we want to make sure we tackle, very promptly,” Dr Chant said on Thursday.

The suburbs north of Narrabeen Bridge have been under stay-at-home orders since before Christmas. The restriction is due to be lifted on Saturday.

Across the border, Greater Brisbane will enter a hard lockdown from 6pm on Friday after a cleaner at a quarantine hotel was diagnosed with the highly contagious UK strain of COVID-19.

Residents in the council areas of Brisbane, Logan, Ipswich, Moreton Bay and Redlands will be required to stay at home until 6pm Monday except for essential work, exercise, essential shopping and to access healthcare or to look after the vulnerable.

It has been compulsory to use the app in some businesses since the start of 2021.

There were no local cases reported in Victoria on Friday, with the sole new infection recorded in hotel quarantine.

It pushes the number of active cases in the state up to 39.

However, some 10,000 test results were delayed on Thursday as one of Victoria’s private pathology labs experienced a technical outage that delayed negative test results.

“The outage does not affect the total positive cases reported,” the health department tweeted on Friday.

“The outage is being restored and these results are expected to be reported in tomorrow’s update.”

It means only 23,108 tests were processed in the 24 hours to midnight on Thursday, down about a third on 30,000-plus results seen over the past four days.

Victoria’s total testing figure over the past week is almost 200,000, as the state tries to stamp out the Black Rock cluster.

Health authorities have confirmed a COVID-positive man, who attended Boxing Day sales and the second day of the Test at the MCG, is linked to Sydney’s northern beaches coronavirus outbreak.

But it still unknown how he caught the virus, having not visited NSW or any high-risk exposure sites.

Contact tracers are trying to establish whether there is a link to that mystery case and the 27 others from the outbreak linked to a Thai restaurant in the Melbourne bayside suburb of Black Rock.

“It’s from Sydney. Exactly how it got from Sydney to here, that is less clear. But it’s exactly the same strain as NSW authorities are battling now,” Premier Daniel Andrews said on Thursday.

The Vermont South man in his 30s is feared to have caught the virus either at Chadstone Shopping Centre on Boxing Day or the MCG Test the day after, with the venues deemed possible acquisition sites.

Authorities have contacted 1700 of the 8000 patrons registered in zone five of the Great Southern Stand of the MCG.

They’ve been asked to get tested and isolate until they return a negative result.

The same advice has been given to shoppers who went to 11 Chadstone stores, including the newly-added retailer Zara, from 6am to 1.30pm on Boxing Day.