Pro-Trump protesters scaled walls at the Capitol after breaking through police lines. 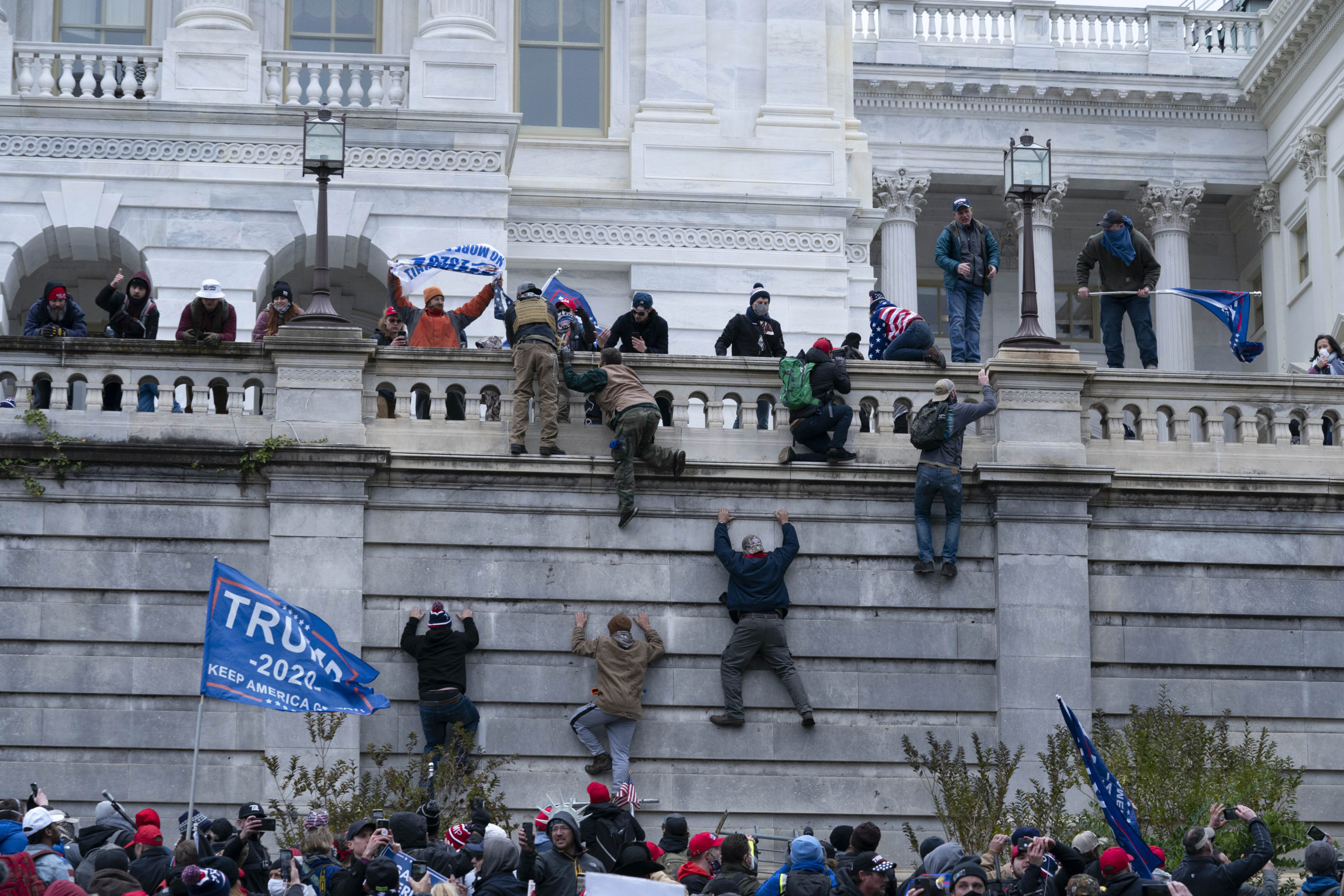 They then marched through the halls of Congress, forcing both chambers to suspend deliberations as they were meeting to certify Biden’s victory in the November 3 election.

A woman died after being shot during the storming, a spokeswoman for the Washington police department said.

No other details were available, the spokeswoman said. It remained unclear who shot the woman.

US network KUSI News later identified the woman as Ashli Babbitt, a 14-year veteran, who served four tours with the US Air Force, and was a high level security official throughout her time in service.

The network reported her husband saying she was a strong supporter of President Trump, and “a great patriot to all who knew her”.

The woman shot and killed inside the US Capitol today was Ashli Babbit, a 14-year veteran, who served four tours with the US Air Force, and was a high level security official throughout her time in service.

Another three people were reported to have died from medical emergencies, according to police.

One protester occupied the Senate dais and yelled, “Trump won that election.” 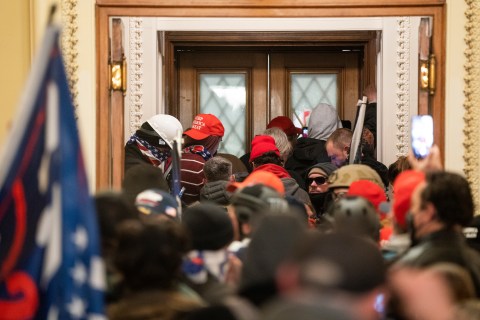 Trump supporters outside the House of Representatives. EPA/JIM LO SCALZO

Police fired tear gas inside the building as the mob surged in. 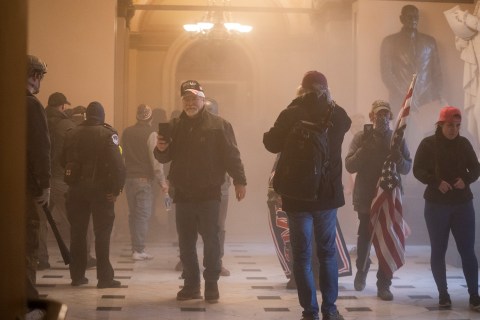 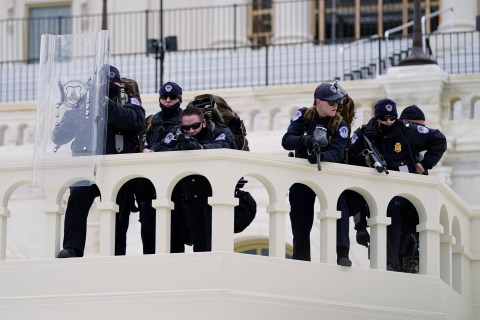 Police at the Capitol as demonstrators break past barriers. Photo: AP/Julio Cortez

The chaotic scenes unfolded after Trump, due to leave office on January 20, addressed thousands of protesters, repeating false claims that the election was stolen from him due to widespread election fraud and irregularities.

Lawmakers had been debating a last-ditch effort by pro-Trump lawmakers to challenge the results, an effort that was unlikely to succeed.

Vice President Mike Pence, who had presided over the joint session of Congress, had already been escorted from the Senate.

Capitol Police told lawmakers in the House chamber to take gas masks from beneath their seats and prepare to put them on. Officers at the front door of the House chamber had their guns drawn as someone attempted to enter the chamber. 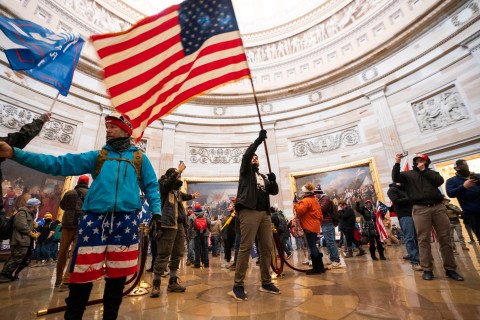 Officers ordered people in the chamber to drop to the floor for their safety.

National Guard troops were deployed and a citywide curfew called for shortly after dusk, as rioters continued to occupy the capital for hours.

“At this hour our democracy is under unprecedented assault unlike anything we’ve seen in modern times,” president-elect Joe Biden said, adding that what unfolded was, “an assault on the rule of law like few times we have ever seen it”.

Biden stopped short of accusing Trump of treason but said what happened “borders on sedition”.

“I call on this mob to pull back and allow democracy to go forward,” Biden said. “At their best the words of a president can inspire, at their worst they can incite.”

Biden also called on Trump to “go on national television now” to “demand an end to this siege”.

The FBI said it had disarmed two suspected explosive devices.

It was the most damaging attack on the iconic building since the British army burned it in 1814, according to the US Capitol Historical Society.

The ransacked office of the Senate Parliamentarian: pic.twitter.com/E7PsSgoAEX

Election officials of both parties and independent observers have said there was no significant fraud in the November 3 contest, which Biden won by more than seven million votes in the national popular vote.

Weeks have passed since the states completed certifying that Biden, a Democrat, won the election by 306 Electoral College votes to Trump’s 232. Trump’s extraordinary challenges to Biden’s victory have been rejected by courts across the country.

Trump had pressed Pence to throw out election results in states the president narrowly lost, though Pence has no authority to do so.

The certification in Congress, normally a formality, was expected to stretch for several hours as some Republican lawmakers mounted an effort to reject some state tallies, starting with Arizona.

Senate Majority Leader Mitch McConnell denounced the effort, saying, “If this election were overturned by mere allegations from the losing side, our democracy would enter a death spiral.”

McConnell helped give Trump some of the biggest accomplishments of his presidency, including deep tax cuts and confirmation of conservative judicial nominees.

The voters, courts and states “have all spoken”, McConnell said on the Senate floor. “If we overrule them, it would damage our republic forever,” he added.

Senate Democratic Leader Chuck Schumer called the challenges “an attempted coup” and said, “The Congress does not determine the outcome of an election. The people do.” 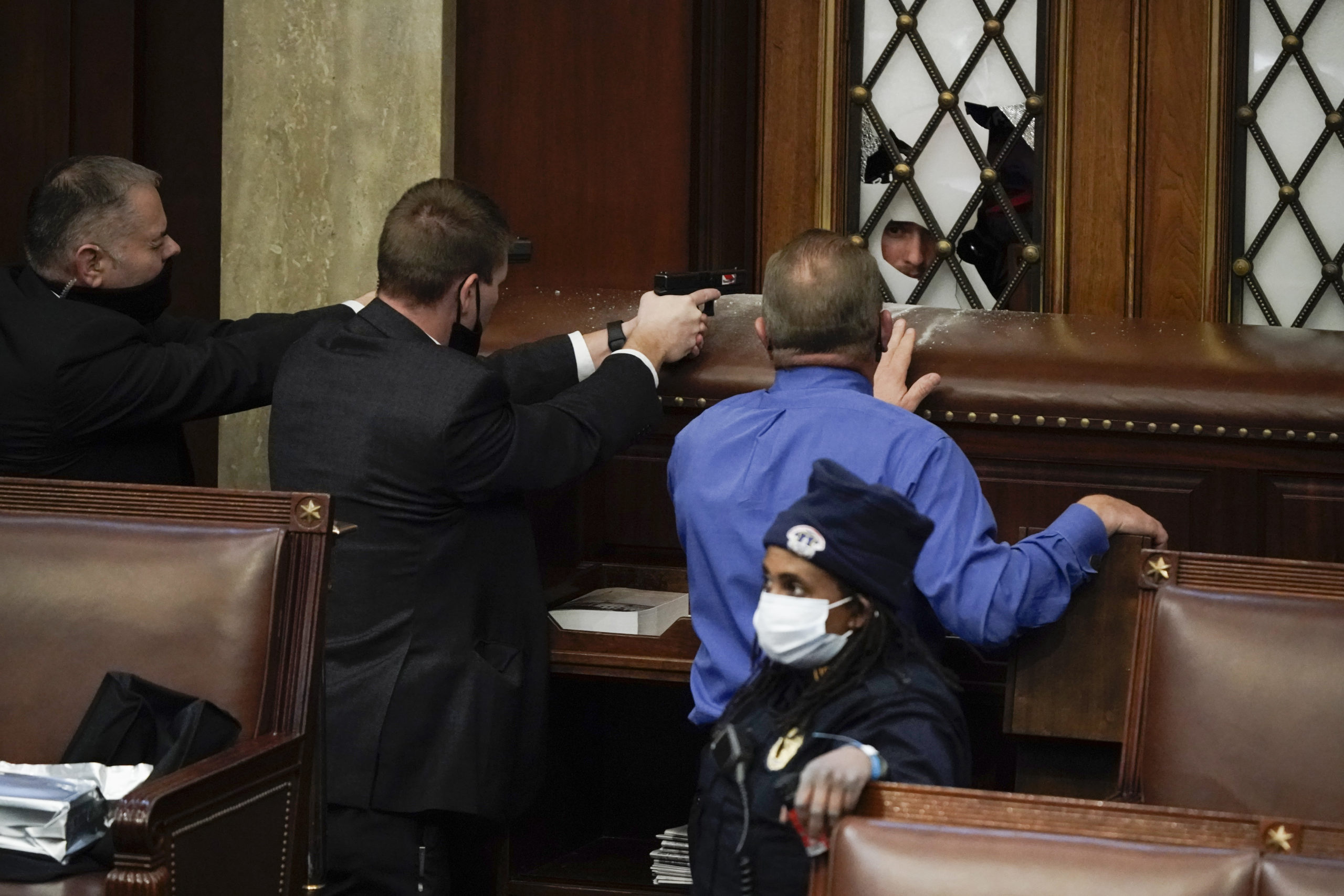 Outside the Capitol, members of militia groups and far-right groups, some in body armour, mingled with the crowds. Protesters chanting pro-Trump slogans overturned barricades and clashed with police. 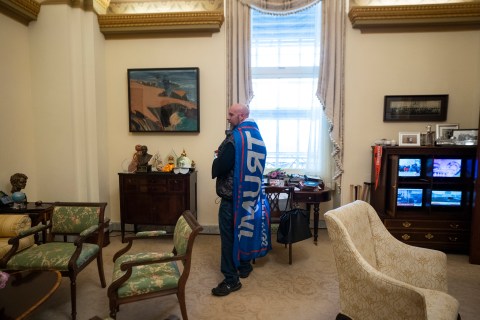 Police declared the Capitol building secure shortly after 5.30pm, more than three hours after it was breached.

Trump later issued a video in which he repeated claims that the election result was fraudulent, while asking protesting supporters to go home, and followed up with a tweet offering the protesters “love”.

This means that the account of @realDonaldTrump will be locked for 12 hours following the removal of these Tweets. If the Tweets are not removed, the account will remain locked. 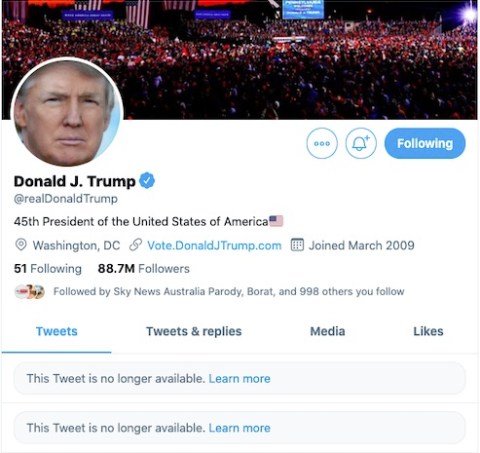 Facebook’s vice president of integrity Guy Rosen tweeted that he social media company believed the video “contributes to rather than diminishes the risk of ongoing violence”, saying the action was part of “appropriate emergency measures”.

Google-owned YouTube said the video violated its policy against content that alleges “widespread fraud or errors changed the outcome of the 2020 U.S. Election”. YouTube spokesman Farshad Shadloo added the company does allow copies that include additional context.

Twitter restricted users from retweeting the video “due to a risk of violence”, and also restricted a later tweet from Trump, again falsely alleging he had won the election.

Pro-Trump protesters also massed outside statehouses from Georgia to New Mexico, leading some officials to evacuate.

News that protesters had breached the US Capitol set off cheers at pro-Trump protests in Minnesota, Nevada and Arizona, where armed protesters marched at the Capitol in Phoenix and several men displayed a guillotine.

Georgia’s secretary of state and his staff evacuated their offices at the Capitol as about 100 protesters gathered outside, some armed with guns.

Republican Secretary of State Brad Raffensperger and his team decided to leave, according to Gabriel Sterling, a top official with Raffensperger’s office.

Trump has focused much of his ire on Raffensperger in the weeks following his loss by about 12,000 votes.

The head of a US business group representing 14,000 companies including Exxon Mobil, Pfizer and Toyota has urged senior US officials to consider removing Donald Trump from office after his supporters stormed the Capitol.

National Association of Manufacturers President and CEO Jay Timmons said Trump “incited violence in an attempt to retain power and any elected leader defending him is violating their oath to the Constitution and rejecting democracy in favour of anarchy”.

Timmons said Vice President Mike Pence, who was evacuated from the Capitol, should seriously consider working with the Cabinet to invoke the 25th Amendment to preserve democracy.”

Here’s my statement on today’s violence at the Capitol. pic.twitter.com/jLCKo2D1Ya

Former US President Barack Obama says the storming of the US Capitol was incited by Trump.

“History will rightly remember today’s violence at the Capitol, incited by a sitting president who has continued to baselessly lie about the outcome of a lawful election, as a moment of great dishonour and shame for our nation,” Obama said in a statement.

GOP Sen. Kelly Loeffler of Georgia says the violence in Capitol has made her reconsider plan to challenge the electoral votes: "I cannot now in good conscience object to the certification of these electors…I pray that America never suffers such a dark day again" pic.twitter.com/LILRucSjrQ

Australian Prime Minister Scott Morrison condemned the attack on the US Congress.

“The riots and protests we’ve seen in Washington DC have been terribly distressing,” he told reporters in Canberra.

“We hope for a peaceful and stable transition of government to the new administration elected by the American people.”

Labor leader Anthony Albanese described the protests as a “tragedy”.

“There is no doubt that the words and actions of Donald Trump have encouraged this activity,” Albanese told reporters in the Blue Mountains, NSW.

“Democracy is precious. It shouldn’t be taken for granted. It should be defended anywhere in the world.”

Former Labor prime minister Kevin Rudd described it as a physical attack on the institutions of democracy by a “far right mob”.

“All because of extremist statements by political leaders attacking the legal results of a democratic election, echoed faithfully by a cancerous far right media,” Rudd tweeted.

“This affects us all.”

“The President should call on the mob he incited to disperse and go home,” he tweeted.

“And Trump’s supporters in the GOP and the media should reflect on what they have enabled.”