In an email to staff yesterday – seen by InDaily – University of Adelaide interim Vice-Chancellor Professor Mike Brooks wrote that the survey findings made “uncomfortable and challenging reading”, but he was “firmly committed to improving the integrity and accountability” of the 140-year institution.

The survey results, linked to staff in Brooks’ email, were used to inform the ICAC’s “University Integrity Survey” of South Australia’s top three universities, which was released to the public earlier this month.

Surveys were conducted with staff at the University of Adelaide, University of South Australia and Flinders University between March and April this year to determine the “attitudes and experiences” of employees regarding corruption and inappropriate conduct at their respective workplaces.

Of the 1364 respondents to the Adelaide University survey, 31.6 per cent reported experiencing bullying and harassment at work, while a further 62.7 per cent claimed they encountered those behaviours in the past three years.

Intimidation and gaslighting are normal and occur on a daily basis

Only 36.9 per cent felt confident that their workplace would take action when they reported corruption or inappropriate conduct, while 39.5 per cent believed the university prioritised maintaining its reputation over addressing complaints.

Nearly half of respondents were also uncertain or agreed that the university discouraged reporting, and that negative consequences to the university should be considered before reporting.

“This undermines the ability of executives to respond to emerging problems,” Independent Commissioner Against Corruption Ann Vanstone QC wrote.

Bullying and harassment were common behaviours reported by staff.

One respondent wrote that there was a “general atmosphere of veiled terror” in their work area, where managers were “seen to play favourites and in the past have actively bullied and excluded staff who disagreed with them, to the point that some staff were forced into early retirement”.

Another said that “bullying and harassment are rife in my workplace”, while a different employee claimed that the university “has had a bad reputation of letting it happen under their watch and also using all its power and resources to protect its reputation (which means the bullying claimant loses their case unfairly)”.

One respondent claimed bullying was “the norm”.

“Everyone knows that there will be a massive personal cost and victimisation if (issues) are raised,” they said.

“Coercive, inappropriate behaviour is commonplace. Intimidation and gaslighting are normal and occur on a daily basis,” another said.

The survey also revealed concerns about the university’s management and leadership, declining teaching standards and a focus on admitting students who were unlikely to succeed.

There is no integrity in the University anymore – it is all about the money, money, money

One respondent claimed the university was “run by bureaucrats who have no idea or concern with its core business”.

Another claimed there was an unhealthy culture of “God Professors”.

“Faculty management are practically pointless,” one said. “They are academics with little to no formal training usually, and at all times their obsession with reputation and ‘optics’ far outweighs their other duties to academic rigor, standards and scholarly performance.”

“There is no integrity in the University anymore – it is all about the money, money, money. We have become a degree factory taking in any student income and pumping them out the other end without any concern for what they learned or the quality,” another said.

Vanstone found there were “various pressures to adjust or provide easier grades” for students to pass.

“These problems were directly or indirectly connected to a focus on student fees and income,” she wrote.

One respondent said there was a “come one come ye’all philosophy” at the university, which was “espoused by an Executive Dean during a staff meeting”.“It was made abundantly clear entry requirements weren’t important, we just needed to obtain higher enrolment figures,” the respondent said.

Another said: “Required levels (in practice) of English language proficiency are so low that students for whom English is not the first language often have very little understanding of what is being said by lecturers or tutors and cannot make themselves understood in written or spoken English.”

“I have had numerous international students whose work was poor, did not complete assignments, failed exams, and I have been pressured to pass them,” one said.

“I have even had my grades over-ruled and modified.”

One respondent said the university wanted to “avoid a reputation of failing students, so will pass all students wherever possible”.

“If prospective students hear that their (sic) is a risk of them failing courses, then they may look elsewhere,” they said.

Academic staff were more likely to have negative perceptions of their workplace compared to senior management staff, except senior male academics who had worked in the university sector for more than 20 years.

Vanstone’s report quotes respondents expressing concerns of a “strong culture of fear in the university” when reporting inappropriate conduct.

“I have found it prudent to maintain a don’t ask don’t tell strategy,” one respondent said.

Another stated: “There is no open or transparent channel for raising concerns, and if you do, nothing gets done except a big black mark against your name in HR and the faculty.”

Vanstone wrote that “large proportions” of Adelaide University staff might not be confident of what to report, how to report and what reporting actions might be expected of them.

Some also expressed “vulnerability” or “anxiety” at not wanting to report behaviour because they were on short-term or casual contracts.

“If one is to challenge the system, the individual is punished by threat of non-renewal of contracts, reduction in hours or dismissed,” one respondent said.

“I have known two staff members who were threatened with suspension for raising concerns.”

Women were more likely than men to feel intimidated about making a report or to want to report anonymously.

In his email to staff yesterday, Brooks wrote that the survey results “do not have the rigour of being tested further by ICAC”.

“Nevertheless, of particular concern to me are references to bullying and harassment, and a general dissatisfaction with the reporting process, including a perceived lack of protection for those who report issues internally,” he wrote.

“Inappropriate conduct of the kind outlined in these survey findings is unacceptable and should not be tolerated, whether in a university, another workplace, or the wider community.

“These findings present an opportunity for us to ensure we understand where improvements to our culture, behaviours and processes are most needed.

Brooks added that work was already underway to review the university’s policies and procedures.

“For example, almost 75% of staff who responded to the survey have indicated they would wish to maintain their anonymity when making internal reports of integrity matters,” he wrote.

“We are already considering an integrity reporting framework that would enable staff to do this.

“Once the University returns from its close down in the New Year, we will be considering the totality of the findings more thoroughly. I will update you as this progresses.”

The university has made the findings available on its website.

The release of the ICAC’s survey results to staff comes after the university was embroiled in controversy earlier in the year over a separate ICAC inquiry into disgraced former Vice-Chancellor Peter Rathjen.

Rathjen was found to have touched two of his female staff members in a sexual manner at a work function and later lied about his behaviour to both then then Chancellor and the ICAC.

The university paid Rathjen more than $600,000 – including a $326,400 contract payout – after accepting and later paying out a compensation claim from one of the women when she resigned.

Following the release of the ICAC’s findings, the university committed to review its complaints policies and implement an education program for staff about sexual harassment. 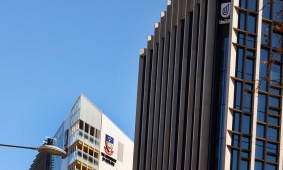 A report summarising the findings from all three university surveys revealed widespread concerns about bullying and harassment, managers prioritising institutional reputation over addressing problems, and pre-pandemic admission and assessment standards for lucrative international students across the state’s university sector.

Vanstone wrote that while the survey was not a “precise depiction of the state of affairs”, it showed “areas of weakness, tension and risk that could provide opportunities for corruption” within SA’s university sector.